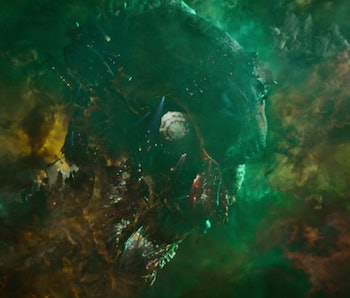 To casual Marvel Cinematic Universe fans, preparing for Eternals will seem more difficult than usual. The upcoming Chloé Zhao-directed superhero epic is largely disconnected from the rest of the MCU — focusing on characters and events that previous Marvel films haven’t explored.

To its credit, that separation allows Eternals to carve out a singular space for itself within the increasingly crowded MCU. However, the film also explores the history of its universe more deeply than any Marvel film has before; keeping track of its various characters and lore dumps might be difficult for all the non-comic obsessives in the audience.

Fortunately, one other Marvel movie touches upon the history of the MCU in a manner similar to Eternals — and even introduces a group of beings that you should be familiar with heading into Zhao’s film.

We are, of course, talking about 2014’s Guardians of the Galaxy, which is streaming now on Disney+. Here’s why Inverse recommends that you check this James Gunn-directed superhero comedy out — either for the first or 15th time — before heading into Eternals.

A race of powerful cosmic beings who played an important role in the creation of the literal Marvel universe, Celestials are at the very center of Eternals’ story.

But while Eternals deals more heavily with the Celestials than any Marvel film before, Guardians of the Galaxy was the first to not only discuss who the Celestials are but also visualize them on screen. Indeed, around halfway through its runtime, the 2014 film features a monologue given by Benicio del Toro’s The Collector about the power and creation of the Infinity Stones.

During his speech, The Collector reveals that only the most powerful beings in the universe are capable of holding and wielding the Infinity Stones on their own. To prove it, The Collector shows footage of one Celestial — known as Eson the Searcher — using the Power Stone to destroy an entire planet.

The Collector’s speech, notably, isn’t Guardians of the Galaxy’s only reference to the Celestials. One of the planets visited in the film is called Knowhere; it happens to be a mining colony built on top of the severed head of a Celestial. 2017’s Guardians of the Galaxy Vol. 2 also touches on the Celestials — and even introduces one in the form of Kurt Russell’s Ego. However, Ego is very different from the Celestials shown in Eternals, which makes Vol. 2 less of a mandatory rewatch heading into the new film.

The same cannot be said for 2014’s Guardians of the Galaxy. At the time of the film’s original release, The Collector’s speech served as a way for Marvel to explain the origins and power of the Infinity Stones. Now, it works as a quick but effective crash course in understanding both who the Celestials are and how powerful they can be.

Both of those things are important to know heading into Eternals. It’s never a bad time to rewatch Guardians of the Galaxy, but it’s essential ahead of checking out Marvel’s latest big-screen offering.

Guardians of the Galaxy is streaming now on Disney+.