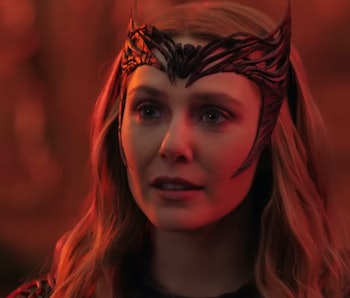 Wanda Maximoff’s fate was left ambiguous at the end of Doctor Strange in the Multiverse of Madness. The mind-bending Marvel Cinematic Universe film concluded with, among other things, Wanda (Elizabeth Olsen) choosing to let her palace atop Wundagore Mountain come crashing down upon her.

However, a brief burst of Chaos Magic during Wundagore’s destruction has led MCU fans to believe that Wanda secretly survived. Now, several new Marvel leaks suggest that Wanda may make her highly anticipated return in the most unexpected of MCU titles.

A Wondrous Return — It was recently revealed that Marvel is developing Wonder Man, a new Disney+ series focused on the hero of the same name. According to The Hollywood Reporter, the series is coming from Shang-Chi and the Legend of the Ten Rings director Destin Daniel Cretton. The filmmaker will reportedly produce the series and possibly direct episodes of it, while Brooklyn Nine-Nine and Community scribe Andrew Guest will serve as the show’s head writer.

Following the project’s announcement, rumors began circulating that Marvel is planning Wanda Maximoff’s return. Some alleged Marvel insiders even suggested that Elizabeth Olsen will film scenes as Wanda for an MCU project next year, while others have claimed that Wanda is being considered for a role in Wonder Man.

As always, make sure to take all of these claims with a grain of salt for now.

Wanda’s MCU Future — While it remains to be seen if these leaks are accurate, it would make some sense for Wanda Maximoff to appear in Wonder Man. As hardcore comic book readers already know, Wanda has a history with Simon Williams/Wonder Man. In the comics, Vision was even programmed with Williams’ brain patterns.

His influence on Vision eventually became the basis of a romance between Wonder Man and Scarlet Witch during their time together as members of the West Coast Avengers. After Williams died, Simon’s feelings for Wanda kept him tied to the mortal plane, and she eventually used her powers to bring him back to life.

Wonder Man and Scarlet Witch’s significant relationship could explain why Marvel is considering including her in a Disney+ series about Simon Williams. It remains to be seen, however, whether that also means Marvel is considering making Simon a potential new love interest for Wanda in the MCU.

The Inverse Analysis — The news that Marvel is considering bringing Wanda Maximoff back from the “dead” shouldn’t come as much of a surprise. Not only does Doctor Strange in the Multiverse of Madness refrain from showing the character’s demise, but Wanda has also become one of the most popular characters in the MCU. It was always unlikely that Marvel was going to let Wanda’s sacrifice at the end of Multiverse of Madness be her final act.

That said, the idea that Wonder Man will be the series that features her return is a surprising development. That’s a twist that raises some serious questions about both Wonder Man’s overall importance and Wanda’s future in the MCU. Unfortunately, fans will probably have to wait a while before they find out more about Marvel’s plans for both Wonder Man and Wanda Maximoff, including whether the latter character will even really be in the new Disney+ series.