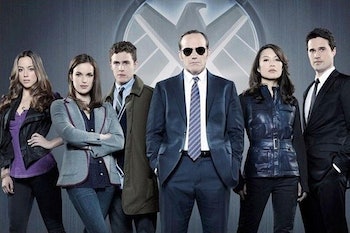 In the era of Disney+, it’s hard to be an Agents of S.H.I.E.L.D. fan. The ABC series, which debuted in 2013, was ahead of its time, connecting the Marvel Cinematic Universe of movies to a weekly episodic show. For seven seasons, S.H.I.E.L.D. coexisted with the MCU, adapting to major events like Captain America: The Winter Soldier’s HYDRA reveal — even if it ignored others, like Thanos.

But the rise of MCU shows on Disney+ has threatened to overshadow S.H.I.E.L.D. — and maybe even scrub it from canon. However, a new leak claims that’s not the case. Instead, one character from the show could be making the jump (back) into the MCU very soon.

WandaVision, in particular, seemed to be the nail in the coffin for S.H.I.E.L.D., but a new report claims that’s not entirely true. Twitter leaker @MyTimeToShine (who recently got a few things right about Ms. Marvel) claims that Chloe Bennet’s character Quake is “coming” to the MCU. They don’t reveal any more than that, but for fans of the show, this alone is huge.

Daisy Johnson (aka, Quake) was the protagonist of Agents of S.H.I.E.L.D. and also notably an Inhuman. Played by Chloe Bennet, Quake’s arc on the show was twisty and complicated. She starts off being recruited by S.H.I.E.L.D. for her hacker abilities but eventually becomes a superhero, teams up with Ghost Rider at one point, and ends the show by flying out into the depths of the universe.

With all that in mind, it’s tough to say exactly how Quake’s story could connect to the current MCU, but we do have one idea that seems particularly likely.

Quake and The Marvels

Considering that the last time we saw Quake she was heading into space, it seems likely that’s where we’ll find her next. That leaves two obvious options: Guardians the Galaxy vol. 3 and The Marvels. Of the two, there’s a clear reason why The Marvels is more likely: Inhumans.

While Ms. Marvel may be a “mutant” in the MCU, her character was originally an Inhuman in the comics. So if Marvel Studios is going to incorporate another Inhuman into its universe, Ms. Marvel’s next appearance feels like the obvious place to start. Plus, the last time we saw Kamala Khan she was being zapped out into the far reaches of the universe. Wherever she ends up, she’ll need some help, and maybe Daisy Johnson can be the one to offer a hand.