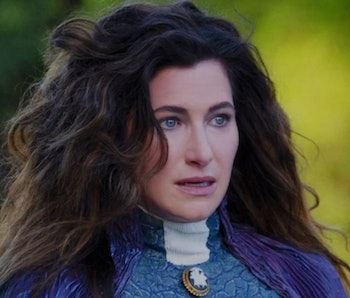 The Scarlet Witch just massacred the multiverse, but the best character from WandaVision is still biding her time. The evil witch Agatha Harkness is set to return to the Marvel Cinematic Universe in a spinoff Disney+ show... eventually, but in the meantime, a new rumor could reveal an incredible addition to the Agatha: House of Harkness cast.

Warning: Possible spoilers for Agatha: House of Harkness ahead.

House of Harkness leaks and rumors

The latest leak comes from Twitter, where rumors are swirling that none other than Amy Poehler could join the MCU. Twitter user @cinestealth claims the Parks and Recreation star is in talks for a supporting role on one of Marvel’s Disney+ shows. Piggybacking on the rumor, @thecomixkid adds that the series in question may be House of Harkness where she’d join forces with Agatha herself, Kathryn Hahn.

Let’s be clear, none of these leaks have been verified. In fact, I trust them about as much as I’d trust Agatha Harkness herself. That said, the idea of Amy Poehler joining the MCU is too fun to ignore. Plus, as other fans have already pointed out, Poehler and Hahn worked together on Parks and Rec. So it’s not totally impossible, right?

Amy Poehler in the MCU?

So if we assume this rumor is actually true — a huge if to be sure — then the question becomes: who will Amy Poehler play. The obvious guess is that she’ll play another witch. WandaVision included a flashback to a scene from the Salem Witch Trials era where a group of witches tried to destroy Agatha; any of those could be Poehler. Then again, she could also be a new witch character who arrives on the scene after Harkness revealed herself in WandaVision.

Another option: Poehler could be a character from the Daughters of Liberty, a team from Marvel’s comics that includes Agatha along with characters like Spider-Woman, White Tiger, Mockingbird, Toni Ho, Echo, Misty Knight, and more. If the MCU introduces this team, it could feature an entire new list of heroes. And that list could include Amy Poehler.

Then again. Maybe she’s just a random non-super character. Or maybe the leak is fake. We won’t know for sure for a while, but for now, I’m going to go ahead and assume that Agatha: House of Harkness is the MCU-Parks and Rec crossover we never knew we needed.