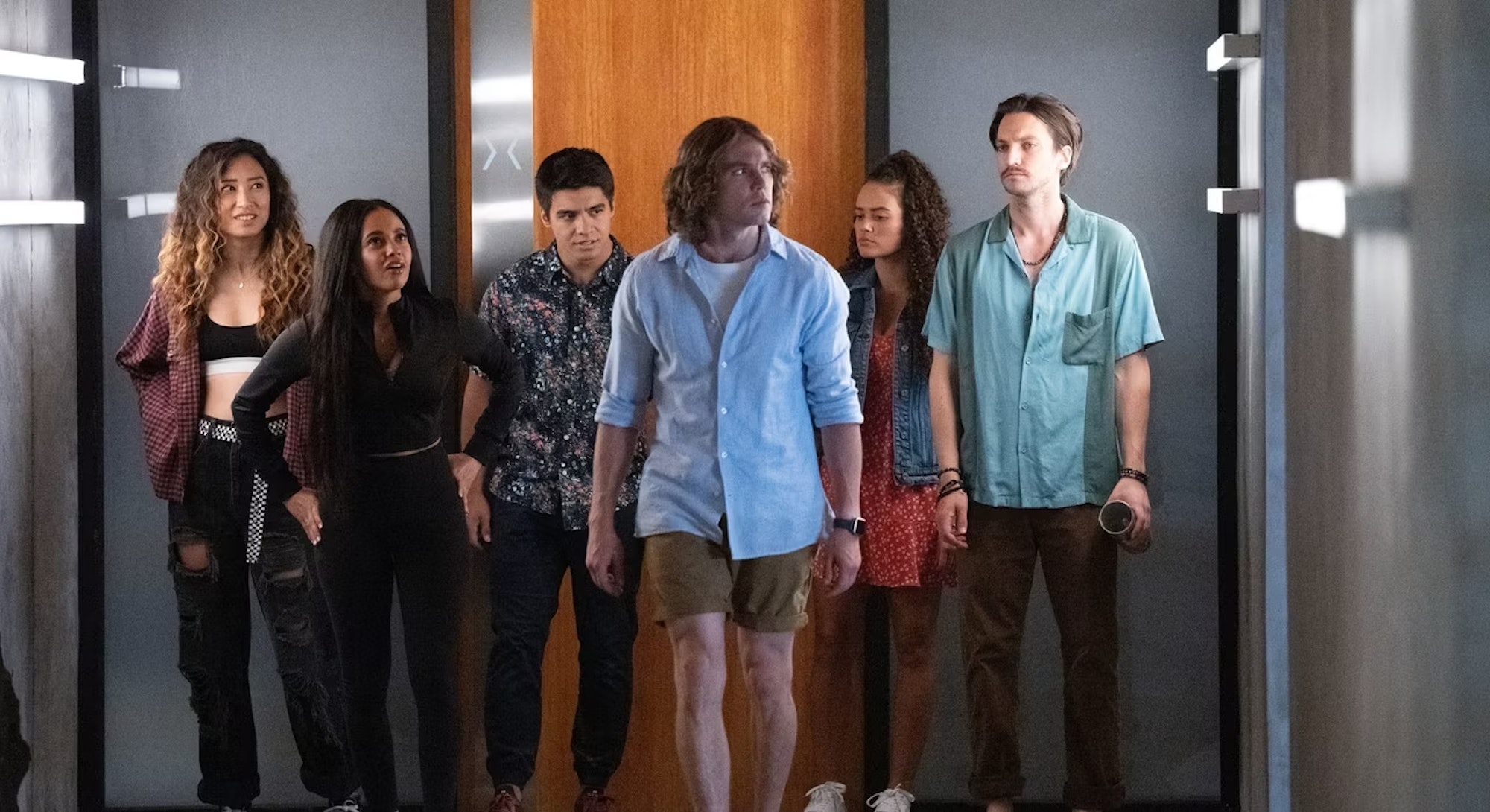 Meet the latest entry in the smart house horror subgenre.

Following in the footsteps of Held (a couple is held hostage by their rental home’s malevolent security system), Tau (a captive uses artificial intelligence to escape from an evil scientist’s lair), and Dark Cloud (an automated rehab facility turns deadly), VOD release Margaux is the latest example in a burgeoning cinematic subgenre that could be described as “smart house horror.”

In Margaux, the titular A.I. is installed in what initially appears to be every tech-savvy vacationer’s dream getaway. But after torturing one poor schmuck (Lochlyn Munro) in a cold open which will probably deter you from using a massage chair ever again, it’s clear the only five-star rating that should be handed out for this property is in psychopathy.

Understandably, the next guests who’ll soon regret accepting the terms and conditions without reading a word — a mismatched bunch of college grads assembled from various YA dramas such as Riverdale, Chilling Adventures of Sabrina, and The 100 — are mightily impressed by all the advanced techno-wizardry on offer. From the wall of virtual selfies that adorns the house’s giant sliding doors to personalized avatars to the party-starting bartending tentacles that emerge from the luxury kitchen countertops, this house has it all.

Each bedroom is tailor-made to its occupant’s desires, as based on their individual social media activity. Richard Harmon’s stoner Clay gets a never-ending supply of weed, while kinky couple Kayla (Phoebe Miu) and Dev (Jordan Buhat) are treated to a Valentine’s paradise. In a clever display of the film’s playfulness, Madison Pettis’ off-the-grid programmer Hannah (“the more you look at the code, the more you realize how scary it is”) receives just a bed and four white walls.

The house’s most remarkable feature, however, is the “nano-hydrophobic” 3-D printing technology that enables its warped virtual assistant (voiced by Susan Bennett, aka the original Siri) to conjure up lifelike carbon copies of the guests. This, of course, results in some eye-rolling gay panic when the AI programs the liquified versions of the party’s two biggest bros to start making out. Margaux’s antics undoubtedly start out more mischievous than murderous. Early on, her worst offense is her amusing, off-the-mark attempts to get down with the kids by using lingo like “OK queen” and “sister from another mister.”

Indeed, Margaux keeps audiences waiting for things to go awry. Although a Jaws homage in the outside swimming pool threatens to drown gate-crashing influencer Lexi (Vanessa Morgan), the sextet are all still in one piece by the halfway mark. That’s not necessarily a bad thing. The gang self-described as “the Nerd Herd” are a little more appealing than the usual stereotypes designed to be picked off one by one.

Yet there’s little chemistry between them. It's never made clear how such disparate individuals would have found common ground in the first place. Other than Clay (the Shaggy lookalike who’s keen to develop a Her-esque relationship with a disembodied voice) and mean-ish girl Lexi, the group is even more of a blank canvas than Hannah’s room.

Miller also plays around with audiences’ expectations, setting up numerous, entertaining fakeouts involving everything from the standard hand down the plughole to an exercise bike that almost takes the idea of a “killer workout” literally. It’s a shame Margaux has bypassed cinemas as these are the kinds of scenes that deserve to be experienced among the shrieks and giggles of a packed Friday evening screening.

Admittedly, some of that laughter could easily be directed toward the CGI which permeates the twisty, goo-covered finale. Although the house itself is an impressive creation that sits somewhere between the envy-inducing pages of Architectural Digest and the dystopian designs of Black Mirror, the robots inside haven’t advanced much from those of Smart House, the 1999 Disney Channel movie about a computerized home that turns on its inhabitants.

Still, the majority of laughs are intentional, with Lexi’s self-obsession and Margaux’s shade-throwing providing the lion’s share. Sure, the narcissistic Gen Z-er trope is an easy target, but the tendency to prioritize online branding over real life is nevertheless constantly funny: “I’m a brand ambassador for those hair extensions,” Lexi whines after a knife comes within a whisker of slicing her head.

The murderous AI, meanwhile, gets more entertaining the bitchier it becomes. “There really isn’t much to you,” she tells bland romantic lead Drew (Jedidiah Goodacre) in one of many fabulously succinct character assassinations. The screenplay is far wittier than you’d imagine from a star-free, on-demand affair co-written by a bit-player from The Bold and The Beautiful.

Margaux surpasses any low expectations that still often come with a VOD release. It might not have anything particularly insightful to say about society’s over-reliance on technology, but with some inventive kills, a self-aware sense of humor, and a cast you don’t necessarily want to die hideous deaths, Margaux is a fun app-goes-rogue horror.

Unlike its villain, this flick doesn’t appear to be driven by an algorithm.

Margaux is available on digital on September 9.