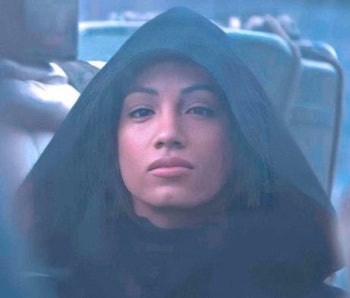 The Mandalorian Season 2 trailer left one question on every fan's lips. Who was that hooded figure lurking in the shadows? Some believed Sasha Banks was playing Ahsoka in disguise, but the most popular theory proposed she was instead playing Sabine Wren, the Mandalorian graffiti artist from Star Wars: Rebels. However, two compelling fan theories suggest Banks may play someone a little more obscure, but just as exciting for Star Wars diehards.

There are a couple of obvious reasons Banks may not be playing Sabine. Redditor erosead pointed out that as a Mandalorian, Sabine likely wouldn't be seen without her helmet. While she wasn't too hard-pressed to keep it on in Rebels, The Mandalorian puts a lot of emphasis on that rule. The sudden appearance of a helmet-wearing scofflaw could undermine all that worldbuilding.

What's more, Banks' foreboding appearance in the trailer suggests her loyalties may not lie with the Rebellion. Another theory by redditor HardDrizzle suggests this character is someone who's never appeared in a Star Wars movie or TV show: Dr. Aphra.

Chelli Lona Aphra is a comics character who became a fast fan favorite after appearing in Kieron Gillan's run of Darth Vader comics, snagging a spinoff series of her own. She's a combination of Indiana Jones and Han Solo: a renegade archaeologist who plays by her own rules and doesn't care who she works for as long as she gets paid.

That dedication to her own personal agenda, Dr. Aphra has allied herself with whoever she sees useful. She's helped Luke, Han, and Leia escape a hypnotic evil alien queen, and also served alongside Emperor Palpatine and Darth Vader.

Her appearance in The Mandalorian would make sense according to the Star Wars timeline. Considering The Mandalorian takes place about six years after the events of Return of the Jedi, this would give young wunderkind Aphra enough time to mature enough to be this hooded stranger. With her interest in Jedi antiquities and weapons, the theory Season 2 will bring Mando to the Jedi sacred planet of Ilum would work with her involvement as well.

This wouldn't be the first we've heard of a live-action Doctor Aphra show, either. Back in December 2019, Making Star Wars editor Jason Ward told Inverse that filming on the show was already underway. We haven't had any hints in that vein since, but a Doctor Aphra cameo on The Mandalorian could be a springboard to a new standalone show. It's also possible the project being filmed was actually the second season of Jon Favreau and Dave Filoni's live-action hit, and Aphra plays a major part in the story.

The evidence against Sasha Banks playing Dr. Aphra is the same against the theory claiming she's playing Sabine Wren. Both Aphra and Sabine are Asian-coded, and Sasha Banks isn't Asian. The Star Wars universe hasn't had the best track record when it comes to diversity in recent years, so perhaps both of these characters should wait until an actress who can portray them as seen in other media is cast.