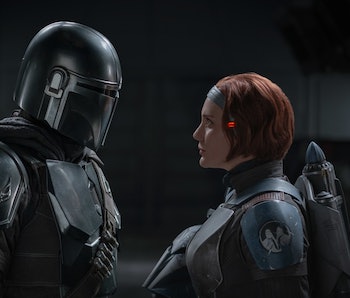 Changes are ahead for The Mandalorian.

After two seasons of Din Djarin and Grogu rollicking through the galaxy, Grogu is off to Jedi boarding school in the care of Luke Skywalker, while Din is left shipless, sonless, and in possession of the Darksaber.

Anything could happen, and there’s probably a long wait ahead for Season 3. But one theory suggests Din’s next nemesis won’t just be a former ally — it’s a fellow Mandalorian.

According to Redditor EquivalentExtra, the next big villain of The Mandalorian won’t be Moff Gideon or another incarnation of the Empire’s dying breaths. Instead, the show’s next antagonist will be none other than Bo-Katan, the heiress to the throne of Mandalore.

Din Djarin crossed paths with Bo-Katan in Chapter 11 of The Mandalorian, and she recruited him to help with a piracy mission on the sea moon Trask.

Bo-Katan has always made her motivations clear: the Darksaber is her birthright, and she’ll stop at nothing to get her hands on it. Now, the saber is in the hands of Din Djarin, who defeated Moff Gideon in battle. But Din isn’t a rightful owner in Bo-Katan’s eyes. Yes, he’s a Mandalorian, but he’s a Child of the Watch, part of a zealous cult that interprets the Mandalorian creed very differently.

As Din starts over from scratch, he may find himself on the run from his fellow Mandalorians. This could require a change of appearance. Din’s helmet and armor are very distinctive, so in order to travel incognito, he might need to shed the armor he’d previously vowed to wear in perpetuity.

As Din Djarin explores just what it means to be a Mandalorian, this could be the natural next step. He’s taken off his helmet three times in The Mandalorian, so maybe it’s time he completely stripped off the armor he hides behind. With a fellow Mandalorian from a different sect on his trail, the character would have to re-examine the traditions he’s fighting to uphold.

That doesn’t mean Din Djarin is done with Grogu, of course. If Bo-Katan is after him, the Mandalorian may seek help and advice from none other than Luke Skywalker, and he could even get his beloved clanmate back after some much-needed Force training. Bo-Katan might not be as foreboding as Moff Gideon, but anyone who has seen her work in The Clone Wars and Rebels knows she’s a force to be reckoned with.