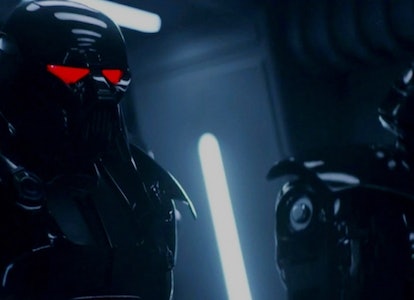 Where does the Empire go from here? So far in The Mandalorian we’ve seen the Darksaber, some weird cloning tanks, and finally, a squad of Dark Troopers capable of kidnapping Grogu like he’s a takeout meal.

It doesn’t seem like there’s any way Moff Gideon and his crew can escalate the fight any further — but a forgotten Darth Vader experiment could be revitalized in The Mandalorian Season 3 to add a whole new kind of monster to the Star Wars galaxy.

In the non-canonical Star Wars Legends novel Death Troopers (not to be confused with the Death Troopers seen in Rogue One) two prisoners aboard the Imperial prison barge Purge observe the ship's engines break down. Luckily, there’s a glimmer of hope — an abandoned Star Destroyer nearby. Though it’s weird the Empire would just leave such a big ship drifting, the crew of the Purge decides to send a scouting party to get essential parts. They come back, not with parts, but with a deadly, ultra-communicable disease that brutally kills... and then takes over.

It’s revealed this virus, known as “Imperial bioweapons Project I71A” or simply “the Blackwing virus” was developed by the Empire as a way to quell dissidents and freedom fighters. An attempt to ship specimens went terribly awry when tanks containing the virus sprang leaks, leading to the entirety of the destroyer’s crew turned into horrendous zombie-like creatures revived from the dead with the sole purpose of feeding on others.

Yes, this plotline is a complete left turn from the normal “aliens and blasters” Star Wars fare we usually get — and that’s why it’s perfect for The Mandalorian. In Season 2, The Mandalorian dedicated whole episodes to different genres — westerns, pirates, heists — it’s only a matter of time before the series tries its hand at horror. So why not zombies?

Death Troopers takes place a year before the events of A New Hope (two of the six survivors of the Purge happen to be Han Solo and Chewbacca) so the timeline more or less lines up. The only thing that needs to change is how long the destroyer is drifting in space before it is discovered. Even better, this feels like a logical next step for Moff Gideon after his defeat in The Mandalorian Season 2.

Moff Gideon’s plans from the start have all been leftovers of the Sith’s work. Imagine how excited he would be to find a floating Empire ship containing a disease that turns his enemies (or troopers) into bloodthirsty zombies. It would be quite the get — until the disease gets out of hand.

What do you do when a zombie outbreak threatens not just an entire planet, but an entire galaxy? While the crew of the Purge was able to create an anti-viral (and save Chewbacca’s life) there’s no telling how far the Blackwing virus could go in The Mandalorian.

Well, probably not further than an episode. There are lots of other genres the show has yet to tackle.