“To contend with Xizor is to lose.” 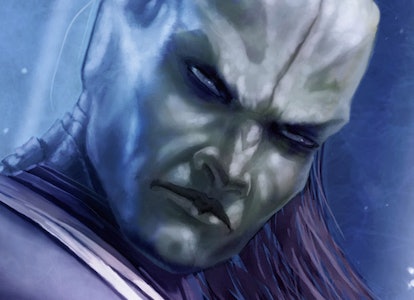 The Mandalorian has never shied away from the less popular aspects of Star Wars canon.

Whether it’s featuring Cobb Vanth from the Aftermath trilogy or incorporating all sorts of characters from the animated universe, The Mandalorian ties together various strands of Star Wars storytelling. With Mando now being spun off into several other series, now is the time to bring in fresh new characters — and the perfect time to bring in a character from the depths of Legends and now-canon comics. Here’s everything you need to know.

In the recent comic crossover event War of the Bounty Hunters, a collection of bounty hunters spar over a bounty like no other — the carbonite slab containing Han Solo. Qi’ra, Crimson Dawn, Boba Fett, Doctor Aphra, and even Princess Leia herself clash over the gunslinger’s tomb. It was a massive moment for the Star Wars comics, though one that was never expected to impact live-action.

But then a panel of the comic showed an unusually familiar Falleen creature. Could this possible Crimson Dawn mole be none other than the Legends iconic villain Prince Xizor?

Prince Xizor was a fierce leader of the Black Sun criminal organization, an organization that participated in a similar fight for a carbonite-encased Han Solo within the Legends storyline known as Shadows of the Empire.

Though Shadows of the Empire was massively popular in its day, and the Black Sun organization does exist within canon, Prince Xizor has languished in Legends since his initial storyline. However, The Mandalorian could provide the perfect vehicle for Xizor to enter the larger canon. A simple cameo in the comics doesn’t do justice to a character such as this.

Though Xizor died in the Legends timeline before the events of The Mandalorian, the new Star Wars live-action television universe could be an opportunity to redo his story and give him the respect he deserves in a new era of Star Wars.

But what role could he serve as part of The Mandalorian Season 3? The Book of Boba Fett is set to introduce a new side of the criminal underworld in the post-Empire Star Wars galaxy. That could be building up to a massive Shadows of the Empire-esque conflict in The Mandalorian Season 3, complete with warring bounty hunters and criminal factions. This time, however, the bounty may not be Han Solo but Grogu.

Is this the first clue as to The Mandalorian’s next Big Bad? Xizor got fans through a lull in Star Wars movies in the 90s, so why not use him similarly today?