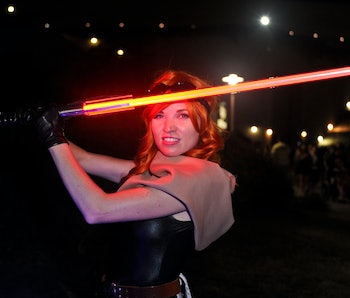 We all know the old Legends canon doesn't "count' anymore, but with so much stuff from the Star Wars Expanded Universe getting rescued by the newer shows (hello Dark Troopers!) it feels like there's an outside possibility that Mandalorian Season 3 and The Book of Boba Fett could totally reboot Mara Jade. And, if that happened, one very obvious Baby Yoda problem could be quickly solved.

Short answer: No! And her creator, Timothy Zahn, previously has said that she's not coming back to canon, even though other characters from his novels (like Thrawn) have. That said if both The Book of Boba Fett and Mandalorian Season 3 are dipping into Luke's early days of trying to build a Jedi school, Mara Jade seems like an obvious fit for all of these stories.

Why Mara belongs in Mandalorian Season 3

In the old EU canon, Mara's early timeline went something like this:

So, somewhat relevantly, the timeline of both The Book of Boba Fett and Mando Season 3 just happens to match-up perfectly with Mara's old timeline. Mando could easily meet a new version of Mara Jade in smuggling circles. Or Boba Fett could find that she's still operating out of Tatooine, perhaps even part of a swoop bike gang.

Why would Mara be on Tatooine? Well, when she still worked as a personal assassin for Palpatine, and she infiltrated Jabba's palace under the alias "Arica," one of Jabba's dancers. In the new, canon timeline, it's pretty easy to concoct a similar backstory for Mara Jade, a story that still places her near Jabba's Palace, but far enough away from the Sarlacc Pit to avoid getting killed by Luke and the gang.

If Boba Fett is going to meet some new and interesting people in The Book of Boba Fett, it feels like Mara Jade should be at the top of that list.

Because Mandalorian Season 2 ended with Luke Skywalker taking Baby Yoda away, most of us have been wondering if that means we'll be getting more CGI Mark Hamill as young Luke in Mando Season 3. But what if there was a way for Luke Skywalker to have a presence in Mando Season 3, but maybe have him appear a little less. Instead of Luke reaching out to Mando, or tracking him down (again) what if Luke sent his new padawan — Mara Jade!

The Book Of Boba Fett could set up Mara Jade in some kind of flashback during the events of Jabba's Palace. Then, in Mandalorian Season 3, we can find out that she's training with Luke to become a Jedi Knight, but because she still has some smuggler mojo, she has to get in touch with Mando for some other reasons.

In this way, Mara Jade could be the person who brings Baby Yoda back into Mando's life. And in some ways, that's better than seeing Luke Skywalker again. Luke is a great character, but in a show like The Mandalorian, he doesn't really fit mostly because he doesn't have an edge. Sure, he's a badass, but unlike Anakin, it's always been hard to believe that Luke would ever really go that dark.

Mara Jade has more shades of grey. She was a full-on Sith assassin, then a smuggler, then a Jedi. This makes her perfect for the tableau of The Book of Boba Fett and The Mandalorian, but her connection to the Jedi makes it even better.

Plus, with Cara Dune out of the picture, Mando needs a new character to walk in and pick up a blaster. Mara is ready, and the fans have been waiting for her comeback for decades.

The Book of Boba Fett will be released on Disney+ in December 2021.