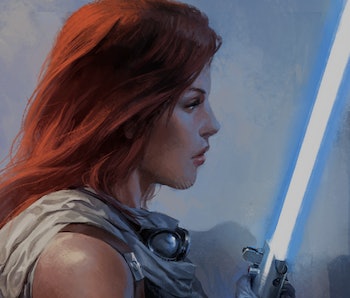 Beloved wife of Luke Skywalker and former Imperial assassin, Mara Jade, is probably never coming back to the official Star Wars canon, no matter how badly fans want it. The author who created Mara, Timothy Zahn, hasn’t included her in his new novel and recently implied she’s just going to stay out of canon forever.

At Emerald City Comic Con in Seattle on March 7, Zahn spoke about his upcoming canon Star Wars novel, Thrawn and revealed that he was able to incorporate several of his Heir to the Empire characters back into real canon in the new book. But he made clear, not “that one you’re thinking of.” Blogger Kelly Knox wrote on Geek Mom that this was understood to the audience to be a reference to Mara Jade, the woman who worked secretly as “The Emperor’s Hand,” with an ongoing mission to murder Luke Skywalker, only to end up marrying him way later in subsequent comics and novels.

Because the forthcoming new Thrawn book retcons the devious Imperial Grand Admiral into contemporary continuity, fans have been hoping for awhile that Mara Jade could be next. When Rebels producer Dave Filoni revealed that Thrawn was going to appear in Rebels, he immediately told fans to chill out on the demands to get Mara Jade retconned next. “I saw that coming a mile away,” he said when asked about a Mara return in July 2016. “No, not likely. You got Thrawn!”

Still, as Zahn revealed at Emerald City Comic Con, he kept the return of Thrawn to Star Wars canon a secret for a full year. Meanwhile, some fans insist that Luke was standing over the grave of his wife — Mara Jade — at the end of The Force Awakens. If this ever turned out to be true, and Kylo Ren was Mara’s killer, it would match up exactly with old canon. In the expanded universe Star Wars books, Mara Jade was eventually killed by Jacen Solo, Han and Leia’s son who had fallen to the dark side of the Force.