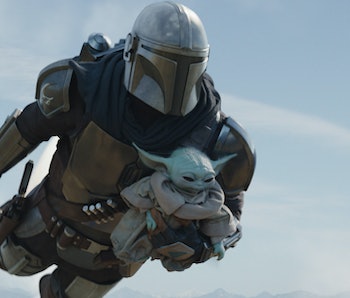 The Mandalorian has always been the story of a loner. Even as Din Djarin accrued friends and allies, the Star Wars series makes one thing clear: Mando is part of a dying breed. But a fresh leak from the set of Mandalorian Season 3 reveals the show may be getting ready to change that perception by revealing just how many Mandalorians are still around in the post-Empire era. (Warning! Possible spoilers ahead for Mando Season 3.)

According to MakingStarWars, which accurately leaked much of the plot of Star Wars: The Rise of Skywalker and has recently set its sights on The Mandalorian Season 3, Lucasfilm is currently filming what sounds like the show’s most epic scene yet. The report describes a sequence featuring roughly 75 Mandalorians all assembled together, which is far more than we’ve ever seen in the Disney+ series.

In The Mandalorian Season 1, we see Din Djarin briefly hang out with a handful of Mandalorians in an underground covert on Nevarro. In Season 2, he encountered another small group led by Bo-Katan. But in both cases, we were dealing with small numbers of Mandalorians at most, not 75. The series has also made it clear that these small Mando clusters are few and far between.

The fact that 75 Mandalorians even exist at this point in Star Wars history is a bit of a shock. The Mandalorian Season 2 reveals that the Empire pretty much wiped out the people and their planet, apparently turning Mandalore into “glass.” At the time the show is set, many people believe the entire planet is cursed.

If 75 Mandalorians are going to assemble in one place, it could signal a new era for Din Djarin’s adopted people. Then again, it could also draw the attention of Moff Gideon and the remains of the Empire — or even the Emperor himself.

Beyond simply forcing us to reconsider how many Mandalorians are out there during the show, this leak has big implications. 75 Mandalorians is basically the equivalent of an army, considering their fighting prowess.

Of course, this raises yet another question. If there were 75 Mandalorians during the time of the show, what happened to them after Season 3? Where were they when the First Order rose up and Palpatine returned? Maybe the Mandalorians simply didn’t want to get involved in galactic conflict after what happened the last time, but then again, maybe The Mandalorian Season 3 is headed for a darker ending than anything we’ve seen from the series so far.

The Mandalorian Season 3 is expected to premiere in 2022.