“Being a smuggler doesn’t mean you have to be a barbarian too.” 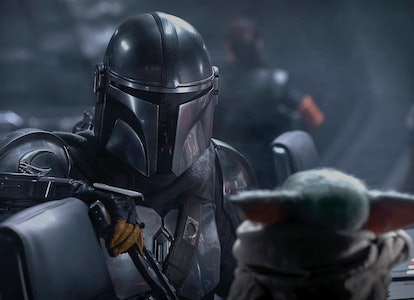 The Mandalorian has perfected the formula of the “rambling stranger” show. Din Djarin is just a man making his way through the universe, constantly going on side missions to earn something or another to help him on his main mission.

It’s a relic of the Western influences of the show, even if the repetition does get a little monotonous. With Season 3 on the horizon, it’s time to add a compass for Mando, someone with the knowledge to tell him exactly where to go.

When Timothy Zahn wrote the Thrawn trilogy (the gold standard of Star Wars novels) he created a cast of characters that were each completely three-dimensional and rich. From the starring Chiss villain to the lizards he kept as pets, every bit was fleshed out.

But one of Zahn’s best creations was Talon Karrde, a top-tier smuggler and “infochant” (or information broker) who made it his business to know everyone else’s business.

In an interview with Star Wars Adventure Journal #1, Zahn explained that Talon Karrde is basically who Han Solo could’ve been had he not gotten tangled up in the Rebellion. Karrde is completely independent, he works for the people who can give him what he wants, and prides himself on his character.

Karrde was introduced in Heir to the Empire (the first book in the Thrawn trilogy), as a smuggler and owner of the ship known as — wait for it — Wild Karrde. His right-hand-woman was none other than Mara Jade, who would later go on to marry Luke Skywalker. When Mara and Luke were stranded on a desolate planet together, it was Talon who came to their rescue.

Later on, Karrde became the leader of the Smugglers’ Alliance and became an ally to the Jedi and the New Republic, even though those things are ultimately what made Mara Jade leave his side. He was solely focused on his dealings in smuggling and information, and the relationships he needed to keep a steady supply.

These resources are what make him perfect for The Mandalorian Season 3. After his abandoning of the Bounty Hunter’s Guild, Din needs a friend with reliable information to help him in whatever mission he undergoes, whether that’s conquering what remains of the Empire or tracking down Grogu.

After two seasons of “I’ll give you what you want if you help me with this quest” at every planet he visits, it may be time to streamline the process. Karrde is the perfect character to provide Mando with the information he needs, while also bringing a bit of extra flavor to The Mandalorian Season 3.