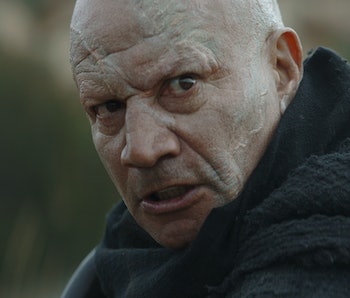 Boba Fett may have fallen into the Sarlacc pit during Star Wars: Return of the Jedi, but he returned in all his badass glory in The Mandalorian Season 2. How he managed to survive the Sarlacc and the timeline of his escape are still a mystery, but a wild fan theory revisits an overlooked detail from the original trilogy to explain Boba Fett’s comeback and appearance.

At the start of Return of the Jedi, Han Solo is a prisoner of Jabba the Hutt, a powerful crime lord who takes pleasure in the pain of his victims. He sentences Han, Luke Skywalker, and Chewbacca to be thrown into the Great Pit of Carkoon, home of a large, tentacled creature known as the Sarlacc. Before sending them to their death, Jabba boasts that the trio will “find a new definition of pain and suffering, as you are slowly digested over a thousand years.”

Our heroes never get to experience that pain and suffering, but Boba Fett presumably does after taking a tumble into the pit. It’s hard to say if there is some truth to Jabba’s words or if he was just dramatizing the situation to scare Han and Luke. That said, the statement could be translated in a plethora of different ways and could certainly be attributed to Boba Fett’s return in The Mandalorian. Let’s break it down.

The theory — Reddit user tyrannustyrannus poses an interesting question: what if we take Jabba literally? Is it somehow possible to experience over a thousand years of pain inside the Sarlacc? The answer: time dilation.

In other words: what if time works differently inside the Sarlacc's stomach? It might sound totally ridiculous, but time travel already exists in Star Wars, so let's at least give this theory the benefit of the doubt.

This could explain why several years in real-time would translate to a thousand years inside the creature. By that logic, the theory argues that Boba Fett was inside the pit for a few days (roughly 20 years in Sarlacc time) and this is why he now looks 60 instead of his actual age, which is 40. (It’s worth noting that Temuera Morrison is nearly 60, but his character is not supposed to be.)

Of course, the Sarlacc pit is a carnivorous being so it’s likely Boba wasn’t inside its belly for very long. Star Wars canon still hasn't revealed how he survived, but in the non-canonical comic book Dark Empire 4: Confrontation on the Smuggler’s Moon, the bounty hunter reveals that the Sarlacc found him “somewhat indigestible.”

The Mandalorian has yet to reveal any further information about Boba Fett’s survival or how long he remained inside the Sarlacc pit. In Chuck Wendig's canonical Aftermath novels, it's revealed that the Sarlacc was injured and left with a hole in its stomach. However, even these books don't really answer the question of Boba's escapades from within the Sarlacc's gruesome digestive tract.

The Inverse Analysis — The theory is sound ... if we’re willing to bend the rules of time to accommodate it. For all we know, the Sarlacc contains a bottomless black hole that twists time. That could be the pain and suffering Jabba was alluding to, instead of the physical pain of being digested.

If nothing else, it would go a long way to explain how Boba may have lost his armor. Perhaps it got sucked into a time vortex and the Sarlacc threw it up at a different point in time. It’s possible that he’ll eventually reveal exactly what happened there to Din Djarin, but the theory is some fun food for thought until we have more information.