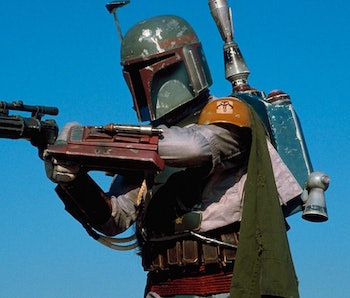 After almost a year of waiting, The Mandalorian Season 2 is almost here. With the October 30 release date approaching quickly, preparations are being made for the release, including a certain veteran Star Wars actor's agency getting a little ahead of themselves on their website. Here's what this unusual leak means for The Mandalorian and Star Wars more broadly.

New Zealand actor Temuera Morrison is well known for his role as clone origin and bounty hunter Jango Fett in the Star Wars prequels, but it's widely been speculated he would at some point return to the Star Wars universe to portray his own cloned son, Boba, the bounty hunter supposedly swallowed in the Sarlacc Pit in Return of the Jedi. Some thought he would appear in a future season, while others insisted he already had a cameo in Season 1 as the mysterious figure who appears after Fennec Shand is left for dead.

However, it appears his first live-action appearance as Boba Fett is incoming, as his agency updated his actor's CV before the release of the show, as noticed by redditor bguiler. While we knew Boba Fett was going to appear previously, we didn't know how significant the role would be, or if it would just be a small cameo or easter egg.

On the resume, though, Morrison is listed as appearing in The Mandalorian under "various" directors. Considering the rotating directing crew of the series, this implies Boba could become a recurring part of another Mandalorian's story. While this may be an error — which wouldn't be surprising considering another entry misspelled his character's name as "Jago Fett" — it could reveal a lot.

The agency has recently pulled the credit entirely from the website. Putting upcoming projects on a CV is common practice, so having a role revoked may mean the eagle-eyed fans who spotted the addition may have exposed too much.

With The Mandalorian's episodic nature, this probably means Boba will not be a one-shot arc like guest stars we saw in Season 1, and will lend a hand to the titular Mandalorian's overarching search for the Jedi "sorcerers" or perhaps go an adventure himself over the course of the season and need some assistance from Baby Yoda.

The Inverse Analysis — While Boba Fett's appearance in The Mandalorian Season 2 comes as no surprise, the fact the agency felt the need to take down the credit entirely is too conspicuous to not mean Boba will play a bigger role than preciously thought. Perhaps if they left it up it would just be passed off as an agency jumping the gun on some minor news, but this seems like Boba Fett will find his way out of the Pit and into Disney+ in a big way.

The Mandalorian will return to Disney+ on October 30.