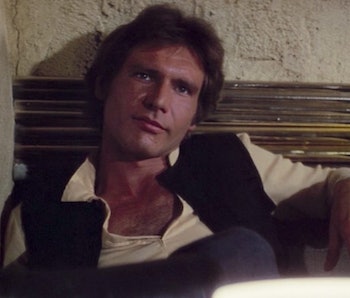 Star Wars concept art is a treasure trove of lore. Even though the final product may not reflect it, concept art can expose the creator's true intention, whether it's making Leia a Jedi at an earlier point in the saga or adding a spider symbiotic monster to Rise of Skywalker. There are numerous instances of concept art from past films reappearing in later Star Wars stories—the spiders featured in Chapter 10 of The Mandalorian were inspired by concept art for Empire Strikes Back. The Mandalorian ends each episode with the concept art used for the scenes, and one key moment reveals an homage to the most iconic scene in A New Hope.

One of the concept scenes shown in the end credits of The Mandalorian Chapter 10 shows fan favorite eyebrowless mechanic Peli Motto sitting down to a game of cards with Dr. Mandible. This isn't a new activity for her, she was showing gambling with her own droid over cards in the fifth episode of Season 1. However, the concept art shows her playing in a familiar area in the cantina—Han Solo's booth.

Redditor GQveracity points out that just above Peli's shoulder is a visible scorch mark, like someone shot a blaster at the wall. Yes, it's the remains of Greedo's shot to the wall in A New Hope, the source of literally decades of fan speculation over who, exactly, shot first.

Unfortunately, this concept art doesn't do much to support either side of the argument because Greedo could have shot first and simply missed, or Han could have shot first, prompting Greedo's shot to go entirely off kilter. Regardless, the point is moot, as the same booth was shown in "The Gunslinger," the Season 1 episode also set on Tatooine, with nary a scratch on it.

It's a pretty undeniable similarity, however. The rail is the same, the table is the same, even the angle is almost identical to the one used in A New Hope. It may not be canon, but it's reassurance that those in power at Lucasfilm haven't forgotten the oldest debate in the Star Wars.

As to who canonically shot first, it's pretty clear George Lucas intended for Greedo to be the instigator, for better or for worse. In fact, in a video promoting the Star Wars: Archives book, author Paul Duncan reveals Greedo shoots five frames before Han Solo. It's a blink of an eye, but it makes all the difference for die-hard fans.

While it may not be conclusive evidence to that age-old question, it's nice to know the fandom discourse of years past is still alive and well.