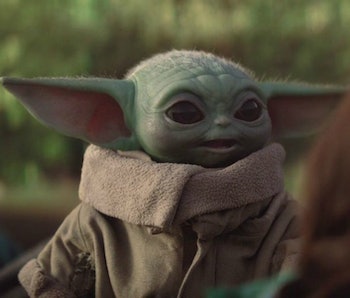 There's all sorts of speculation surrounding The Mandalorian Season 2. With the season premiere slated for late October, we're within reach of some answers as to who that strange woman is, whether or not Ahsoka will show up. Most importantly, we might finally learn the mysterious origins of The Child, affectionately known as Baby Yoda. However, a theory usually applied to Palpatine may explain our small green friend's mystical origins.

Redditor soupinate44 came up with this theory upon noticing Baby Yoda and Anakin Skywalker were born the same year, 41 BBY. There are no coincidences when it comes to The Force, so these two must be connected somehow. That's where the theoy comes in: what if Baby Yoda was created in response to Anakin's supposed "birth of the Force"

Anakin's birth is a complicated matter. While The Phantom Menace revealed Anakin "had no father," there hasn't been a succinct answer as to how exactly Anakin came to be in this world. One plausible theory was that Palpatine conceived Anakin through the Force, a theory that seemed to be confirmed in Darth Vader #25, which depicted Palpatine looming over Shmi Skywalker.

While that theory was debunked by the comic writers, this "Force conception" may be the solution for Baby Yoda's origin. If Anakin's conception was not caused by anyone in particular, just induced by the Force as a way to fulfill the prophecy, perhaps an old Jedi Master like Yoda could have sensed this and imbued some Force power into an unborn child.

What kind of child would Yoda have the strongest connection with? One of his own species. It's obvious Yoda had some hesitation towards Anakin as a young child. Perhaps he realized this child was the disturbance in the Force he noticed all those years before, the one he attempted to fix by balancing with Baby Yoda.

The biggest flaw with this plan is the fact Baby Yoda is still, well, a baby. Even after Anakin's demise, Baby Yoda is still toddling around with the Mandalorian, sipping soup, and learning his Force powers. His connection to Anakin and therefore to the Sith could be what makes him so valuable to the Empire.

Does this mean Yoda is Baby Yoda's father? Not any more than Palpatine is Anakin's father. The biology of Star Wars and the Force in particular are too mystical to be understood or even theorized, but the likelihood of a connection between Yoda and Baby Yoda seems too perfect to not happen, even if it means Yoda using a technique from Palpatine.

More like this
Entertainment
5.3.2022 10:30 AM
Is Palpatine in Obi-Wan Kenobi? Ian McDiarmid says his “presence will be known”
By Dais Johnston
Entertainment
14 hours ago
Ahsoka will be different from The Mandalorian in one important way
By Alex Welch
Entertainment
5.3.2022 12:00 PM
How the "Mother of Yoda" conquered Hollywood — and why she disappeared
By Falene Nurse
Related Tags
Share: