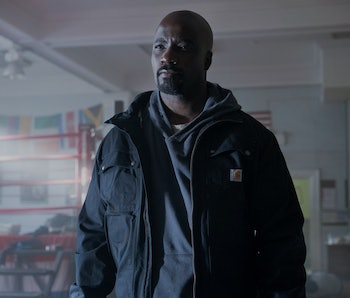 In 2018, Avengers: Infinity War ended with half the heroes of the Marvel Universe vanishing into dust. On March 1, the same thing will happen to the heroes on Netflix.

Cheo Hodari Coker, executive producer and showrunner of Marvel’s Luke Cage Netflix series, recently spent time on Twitter reminiscing about his work. Coker said he was inspired to revisit the show after learning that all the Marvel TV shows made for Netflix will depart the streaming service on March 1. In doing so, Coker reminded everyone of how immaterial the streaming age is.

“Rewatching Luke Cage while I can on Netflix,” Coker wrote on February 21. “They're going to do what they do. It's theirs. I just hope they don't sit on it for years to allow for an easier reboot, or re-air it with a different mix, or the N-Word muted.” Coker added he’d “love to do commentary tracks,” and in later tweets he expressed interest in a YouTube re-watch or podcast, “hopefully without getting sued.”

The producer isn’t alone in thinking about the past. Throughout the pandemic, there have been countless virtual cast reunions and re-watches hosted by TV and filmmakers. Zack Snyder, for example, hosted a live watch-along of Man of Steel in the summer of 2020.

What makes Coker’s reminiscence different is a sense of uncertainty and finality. Luke Cage was among a crop of several Marvel shows, including Daredevil, Jessica Jones, and The Punisher, produced exclusively for Netflix. While all the Marvel Netflix shows were officially canceled in 2019, the shows remained accessible until now, with March 1, 2022 marking the end of a collaboration dating back to 2013.

So far, there’s no word on where, or even if, the shows will be made available on a permanent basis (although Canadian Disney+ subscribers will get to stream them starting on March 16). There is speculation that the shows will land on Hulu, which has been Disney’s platform for adult-oriented content in the United States.

That the once-popular shows will vanish from Netflix is raising questions about permanence in the streaming age. Only a fraction of the whole Marvel Netflix slate received physical Blu-ray and DVD releases, and the special features on those releases were anemic, lacking traditional bonus features like director commentary tracks. In the replies to Coker’s thread on Twitter, people have expressed desire for physical releases and commentary tracks, all of which likely would’ve happened before streaming became the predominant way to access entertainment.

So far, Coker’s tweets haven’t been too concerned about where his show will live after March 1. They’ve instead contained interesting tidbits, like the casting process for Cottonmouth (both Erik LaRay Harvey and Ron Cepheus Jones were in the running before Mahershala Ali, who wanted Cottonmouth precisely because he knew his character would die mid-season), how Luke Cage was supposed to shoot after Iron Fist, and how Regina King nearly directed an episode.

Until there’s a confirmed home for all the shows, streaming them over the next few days on Netflix is the only way to still enjoy them. If you do revisit Luke Cage, be sure to have Coker’s Twitter feed open in another window. He just might tweet something that’ll make you appreciate these shows even more.

Luke Cage is streaming now on Netflix until March 1.