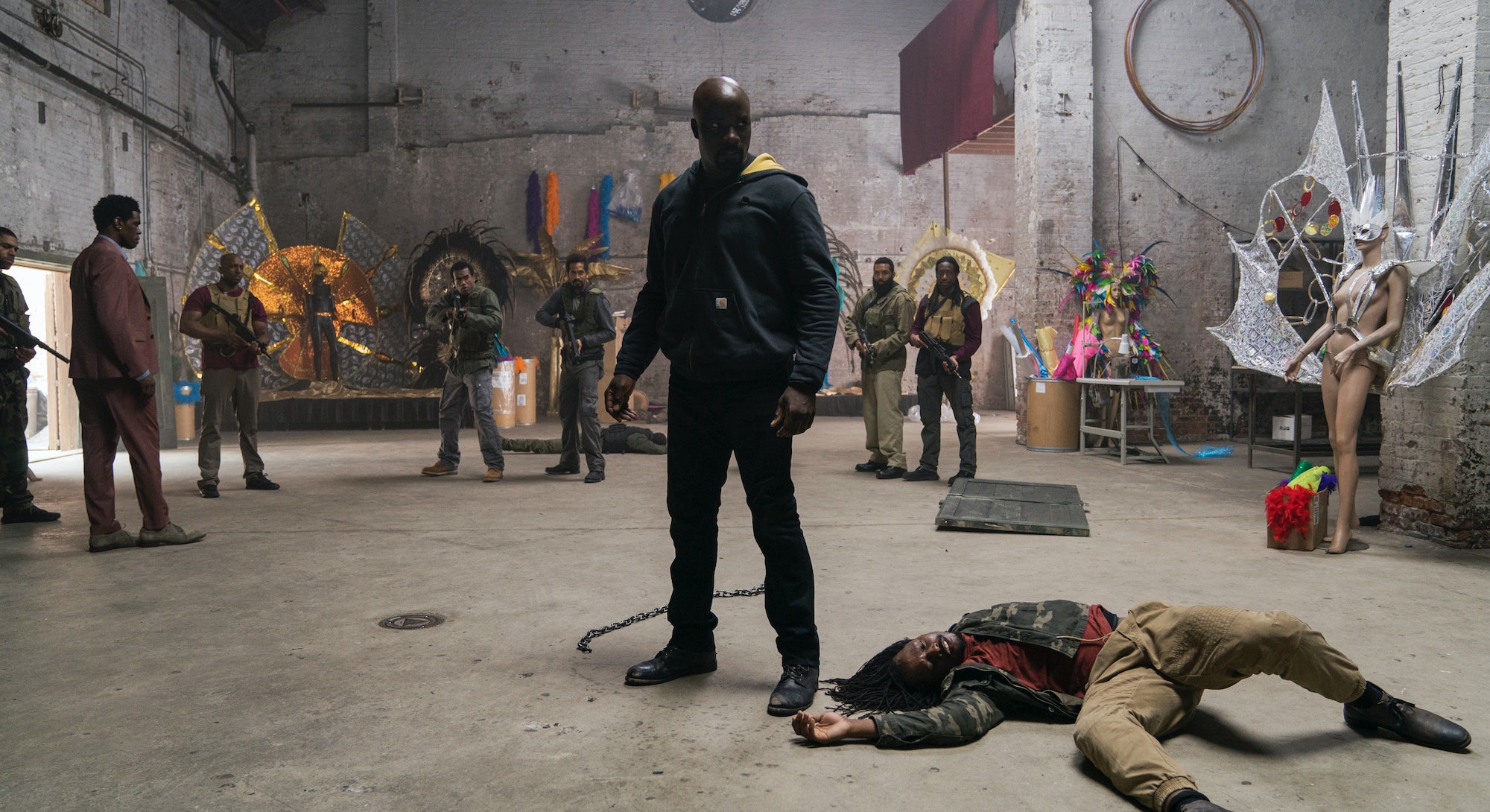 There’s a scene in Season 2 of the Marvel/Netflix series Luke Cage that redefines the Harlem Hero’s iconic hoodie. In need of quick cash, Mike Colter’s bulletproof Defender agrees to become a “Hero for Hire” and appear at an exclusive party thrown by a Wall Street shark, fittingly named “Piranha.” But per the agreement, Luke, is forced to wear a brand new Carhartt zip-up artificially riddled with bullet holes.

In the mirror, Luke sighs, zips the hoodie, and mutters to himself: “Goddamn cosplay.”

Luke Cage isn’t dragging fans at Comic-Con, showrunner Cheo Hodari Coker insists. Rather, Luke is grappling with what his existence means, both inside and out of the Marvel Universe.

“From Luke’s perspective, when he goes out in his hoodie and defends Harlem, he does that from his heart,” Coker says. “Now that he has to do this, shaking hands and getting paid for it, being corporate, that feels like selling out.”

The scene touches on nearly all the themes of this 21st century TV show of an indestructible black superhero. From one angle, it’s Luke Cage confronting himself for selling out. In another, it’s a quiet subversion of black masculinity. And in another, it’s a metaphor for how popular media can reappropriate culturally significant imagery that scrubs away authenticity.

Initially an homage to Trayvon Martin and other black men who’ve fallen victim to racial profiling, Luke’s hoodie has earned a new, mythic status on par with Superman’s cape or Batman’s cowl. Whether that means strength, cosplay, or both, is up to those who wear it.

Luke didn’t always wear hoodies. He does now in the comics, thanks to his Netflix series, but he’s never been a fashion-forward avenger either. Trace his origins and you’ll find Cage has always kept it real.

While Captain America punched Nazis in star-spangled chainmail, and the X-Men fought Magneto like a Euro pop band, Luke “Power Man” Cage began fighting crime in a yellow button-down shirt and blue pants. (And a tiara. It was the ‘70s.) Even when Luke led the Avengers years later, he was still anti-spandex, donning muscle shirts and jeans as his uniform.

Then, in February 2012, Trayvon Martin was shot and killed by George Zimmerman while walking home in a grey hoodie. The hoodie made the 17-year-old teenager “a suspicious guy” in the eyes of Zimmerman, who was acquitted in the highly-publicized trial. In the aftermath, hoodies became a symbol for Martin, igniting conversations over what a common piece of clothing suddenly means when it’s worn by black people.

“The hoodie came up because it made sense,” Mike Colter told Wall Street Journal in 2016. “People wear it all the time. The fact that it’s been associated with Black Lives Matter … because of the senseless reasoning pointing out black males who wear this as if they’re wearing it to rob banks, it’s unbelievable they can’t wear the hoodie for what it’s worn for, which is just to be comfortable.”

“When you’re that size as a black man, people think ‘thug, football player, boxer,’” he says. “It’s always about brawn. It’s about anger. If I’m wearing a hoodie, I might be there to cause trouble. I know that if I lose my temper, I could very easily get shot.”

So when Coker gave Luke Cage a hoodie, the metaphor was uncanny.

“For me it was a stance,” Colter said in his Wall Street Journal interview. “I bought several hoodies. I felt like this show was a chance to bring attention to that.”

It really was Luke Cage that turned a hoodie into armor. Even in his first TV appearance, in Jessica Jones, Luke looked nothing like the neighborhood icon he’d become.

“Once he became Cheo’s, we wanted to humble him, make him that working class hero,” says Marvel TV costume designer Stephanie Maslansky. “We didn’t realize how far we’d go with it, but it became a very iconic part of his look.”

Cage’s hoodie, just like in Season 2, has now taken new context in the real world. Hit up Comic-Con and you’ll find cosplayers of Luke Cage wearing hoodies with holes poked through by box cutters.

“Wearing the hoodie made me feel SO AWESOME!” says Ricky, a YouTube personality who goes by the name Stewdippin over Twitter direct message. On Halloween 2016, Ricky posted a Luke Cage tutorial as part of a “$5 Cosplay Challenge” series. “Wearing it makes me feel confident, powerful, but more importantly unabashedly comfortable in my own skin.”

“The homage to Trayvon Martin was a beautiful choice,” he added. “They took something that was used as reason to be suspicious of black people into a symbol of hope or almost like a badge of honor. I love it.”

Though in the MCU, Cage isn’t happy about his “cosplay,” in real life — where the Netflix show grapples with what happens when clothing becomes a symbolic costume in its own fiction — members of the black cosplay community have found a hero to emulate, one whose imagery is more than a power fantasy.

“We still have a ways to go,” Ricky says, “but I think shows like Luke Cage are showing the many flavors black people come in and that what we wear isn’t a reason to cause for concern. We’re just our here living our lives.”

“Once in a while costumes take on new meaning,” Maslansky adds. “As costume designers we don’t know everything. You need to support the character and the story, and that’s what we’re striving to do.”

“It’s always about brawn. It’s about anger. If I’m wearing a hoodie, I might be there to cause trouble. I know that if I lose my temper, I could very easily get shot.”

The show’s portrayal of black masculinity, a balancing act between one’s outside image and their inner turmoil, is what fuels Season 2 of Luke Cage. Picking up in the aftermath of The Defenders, the series follows Luke Cage (Colter) enter an existential crisis as new and old criminal forces descend upon Harlem, including one rival named “Bushmaster.”

There’s plenty more action than in Season 1, but Coker isn’t easing up on the drama either. “Black men this size rarely get to have roles where they get to be emotional, where they get to cry, to be sensitive,” he says. This isn’t going away, even if fans weren’t happy with it last season.

“They wanted Clubber Lang,” Coker says about some fans’ reviews, “Clubber is my favorite Rocky villain, but the real Mr. T has more range.”

There is a texture to Luke Cage that appears effortlessly, which happens when a show starring a black superhero is staffed by black producers, black actors, and diverse writers and directors (including one Lucy Liu). So when Luke Cage debuted in 2016, the bullets bouncing off Cage’s skin weren’t just relevant. They were also resonant.

Now, two years later in front of a mirror, becoming a “Hero for Hire” maybe isn’t what Luke Cage had in mind. Coker is reminded of his grandfather, a Tuskegee Airman who flew in World War II.

“He didn’t like telling war stories,” Coker remembers. “People died, he survived. It wasn’t cute. It was life and death. He always said that people that talked the most, did the least.”

While Luke has an unbreakable body, it doesn’t mean he can’t get hurt. And it’s the fakeness of Piranha’s hoodie that cuts especially deep.

“He felt every one of those bullets that entered that sweatshirt,” Coker explains. “He feels the pain. Fans are like, ‘Oh, cool! You got shot and nothing happens!’ But Luke feels those bullets. The bullets don’t penetrate, but that doesn’t mean it doesn’t hurt.”