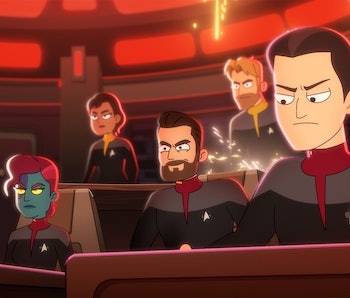 For hardcore Trekkies, hunting for Easter eggs and deep-cut references in the most innocuous places can lead to galaxy-brain theories.

But out of all the new Star Trek series, the one series designed to harbor Easter eggs, out-of-the-blue references, and gloriously unexpected cameos is Star Trek: Lower Decks.

As part of Comic Con@Home 2021, Paramount+ revealed trailers for several new series during its “Peak Animation” block — including a new look at Lower Decks Season 2.

Here’s what’s in the brand-new trailer, the one cameo we didn’t see coming, and details on the series will pay homage to the Trek fandom of the 1990s. Trailer spoilers ahead.

Like Season 1, Lower Decks Season 2 is chock-full of references to other iterations of Star Trek. Here are the deepest cuts in this trailer:

In the most nostalgic scene in the trailer, Boimler is encouraged by Tom Paris, but then it's revealed that Tom Paris is on some kind of commemorative plate? The hallucinatory “Tom Paris” tells Boimler he’s “worried about the fumes” since Boimler is “talking to a plate.”

This joke is hilariously layered. First, Boimler’s obsession with famous Starfleet characters carries over from Season 1. But, his hero worship of Tom Paris could specifically reference something similar that happened with Lt. Barclay in Star Trek: Voyager. In episodes like “Inside Man,” and “Pathfinder,” Barclay develops an unhealthy attachment to holographic versions of the Voyager crew.

On top of that, the idea of a commemorative plate depicting a famous Star Trek person is an in-universe joke about the proliferation of similar fancy-plate collectibles in the 1990s. In an earlier Lower Decks Season 2 teaser trailer, Boimler and Mariner appeared to have some Mr. Data action figures. In the new trailer, we see Rutherford and Tendi making a model of the USS Cerritos.

Basically, the inside jokes here aren’t just about the Star Trek universe, but also about random 1990s Star Trek swag that defined the fandom of the TNG, DS9, and Voyager eras. Lower Decks is playing with Star Trek toys. Literally.

The trailer somehow manages to conceal any huge plot developments, but it reveals that this seasonEaster eggs might be the most hardcore ever. If this wild level of detail is in the trailer, we can only imagine what’s going on in the actual episodes.