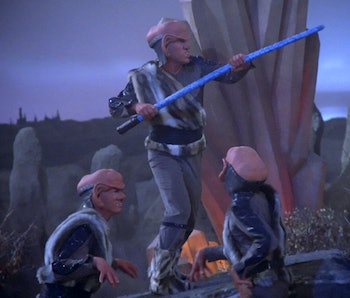 Back in 1987, during Season 1 of Star Trek: The Next Generation, the series attempted to establish the new worst-enemy of Starfleet. No, it wasn't the Borg, nor was it the Cardassians or the return of the Romulans. In TNG Season 1, the big-eared Ferengi were the big bads of what was then new-Trek.

Unlike the Klingons (honorable warriors) or the Romulans (cunning tacticians), the scariest thing about the Ferengi was that they were super sexist and only obsessed with money. As the franchise went on, Deep Space Nine managed to use the Ferengi to make all sorts of interesting social statements, but if you only saw these alien race in TNG your cringe-factor would go way past safety limits.

In the second episode of the new animated comedy Star Trek: Lower Decks the dubious stereotypes of the Ferengi are played for laughs... and then, a last-minute, super-smart twist. Here's why that twist is funny, but why it also makes everything about the Ferengi in TNG a little bit better.

The primary plot of "Envoys" is all about Boimler and Mariner trying to cajole a drunken Klingon to his eventual destination at a Federation embassy. Throughout the episode, through no-fault-of-her-own, Mariner keeps showing-up Boimler with her natural street smarts, which gets them out of a variety of scrapes, including deadly encounters with secret-monsters and a shapeshifter. But at the end of the episode, Boimler and Mariner are confronted by a Ferengi who is clearly trying to rip them off. Mariner acts like everything is okay, but Boimler correctly identifies all the undesirable traits of the Ferengi, and, in doing so, prevents both of them from getting into even worse trouble than before. This allows Boimler to feel like he does know a thing or two about not falling for various alien schemes, even though he's spent the entire episode doing exactly that.

At the end of the episode, he's recounting his big moment to everyone in the bar of the USS Cerritos. Can you believe that Mariner didn't recognize the tell-tale signs of a scheming Ferengi? It's absurd, right? Well, yes actually, it is. Because in the final moments of the episode, we see Mariner having a quick chat with the same Ferengi. Turns out the whole thing was a set-up and she asked this particular Ferengi to act the fool in order to make Boimler feel better. She asks him how his wife is, and they have a totally normal conversation.

Basically, in this one, simple twist Lower Decks manages to take super-cliché, one-note alien species from The Next Generation and turn the cliché on its head. In Deep Space Nine, the big-hearted Rom is depicted as an outcast among Ferengi, implying most of them are close to being the terrible type of Ferengi we see here. Other than Quark's occasional act of charity and the Ferengi scientist Dr. Regya, Rom was pretty much the only "good" Ferengi we'd met. Like a lot of alien species in Trek, the entire species tends to be reduced down to a few traits. Mariner and this Ferengi, Quint, are old buddies, and she even refers to Quint's wife, which is significant because we know that mainstream Ferengi culture is hopelessly sexist. This reference specifically gestures at something that happened in DS9.

By the end of Deep Space Nine in roughly 2375, Rom was responsible for all sorts of reforms in Ferengi, culture, including equality for all genders. Lower Decks takes place in 2380, meaning the status-quo of the Ferengi in the galaxy has been way more progressive for at least five years. So on some level, Boimler's prejudices about how Ferengi used to behave are probably aligned with that of the average viewer. The Next Generation made the Ferengi into gross shorthand for greed, corruption, and sexism. But the twist in Lower Decks is reminding us that you can't judge a book by its cover.

In fact, this twist is played two other times in the opposite direction prior to the denouement at the end. Boimler believed a flirty alien wasn't a monster, and that another alien wasn't a shapeshifter. In classic episodes like "The Devil in the Dark" in TOS, "Night Terrors" in TNG, or even "The Butcher's Knife Cares Not for the Lamb's Cry" in Discovery, the notion of misunderstood monsters — or too many assumptions about "gross" aliens — is prevalent. In the best of Trek, an alien that seems like a monster might be your friend, and a creature that seems warm and friendly might really be a monster. In this way, the various twists and turns in "Envoys" are a synecdoche for all those famous Trek twists.