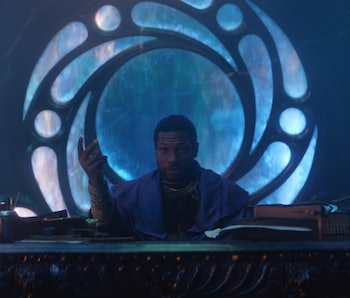 What if Sylvie and Loki aren’t the only characters in the Marvel Cinematic Universe to have crossed paths with He Who Remains?

That pair finally came face-to-face with the powerful and eccentric Kang variant in Loki’s Season 1 finale, at which point he gave them significant reasons to let him continue controlling the timestream. He Who Remains (Jonathan Majors) even went so far as to offer Loki (Tom Hiddleston) ownership of the Infinity Gauntlet, proving just how invested he was in maintaining the timeline’s stability.

One new theory supposes that He Who Remains had previously made a deal with another influential figure in the MCU, radically changing our understanding of a pivotal scene in Avengers: Infinity War.

Over 14 Million Realities — Doctor Strange (Benedict Cumberbatch) may have met He Who Remains long before Sylvie (Sophia Di Martino) and Loki, according to a new theory advanced by Reddit user u/twally024. And unlike those two variants, the Sorcerer Supreme may have managed to reach an agreement with the Time Variance Authority’s elusive creator.

Strange would have likely crossed paths with the TVA in at least one of the millions of realities he looked through in Avengers: Infinity War, this theory postulates. Since Strange is smarter and more powerful than Loki, it’s also not a leap to presume that he could have located the Citadel at the End of Time and, therefore, come into contact with He Who Remains.

After hearing about the dangers of a multiversal war, Strange might have worked out an arrangement with the Kang variant, one that simultaneously maintained the sanctity of the timeline and allowed the Avengers to defeat Thanos. He Who Remains may have demanded that Tony Stark (Robert Downey Jr.) die in exchange for allowing the Avengers to travel through time and defeat Thanos. That’s a sacrifice Strange, as he essentially says early on in Infinity War, would have been willing to make.

A Deal at the End of Time — As the guardian of the Time Stone, Strange is set to play a major role in the multiversal storyline fans just witnessed kick off in Loki Season 1. With that in mind, how impactful would it be if it’s revealed in Doctor Strange in the Multiverse of Madness that Strange knew about the TVA and made a deal with He Who Remains, ensuring the Avengers’ victory against Thanos?

That’d be a shocking twist for Marvel, and one that would establish Strange as the only hero in the MCU who understand how who created the multiverse — and what it may take to fix it. This would also, notably, act as a neat way to tie the events of Loki back into the film side of the MCU.

The Inverse Analysis — This is an interesting theory and one that fits well with Doctor Strange’s established patterns of behavior in the MCU. Not only is Strange smart and capable enough to find He Who Remains, but he’s also pragmatic enough to make a deal like the one outlined above. Just thinking about it adds an extra layer of genius (and ruthlessness) to Doctor Strange’s whole Infinity War plan.

As of now, there’s no way of knowing just how much certain characters in the MCU know about the TVA or He Who Remains. Loki and Sylvie appear to be the first characters to survive their encounters with these foes, but it’s possible that’s not the case. If there’s one character in the MCU who could believably have prior knowledge of the TVA, it’s Doctor Strange.