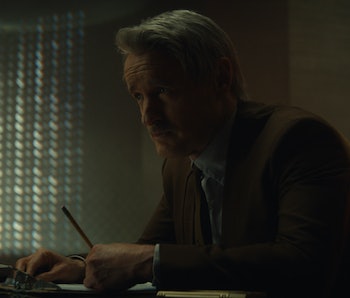 You can’t manipulate the Asgardian god of mischief, but Mobius M. Mobius is going to try. In the new Marvel series Loki streaming soon on Disney+, Owen Wilson stars as Mobius (M. Mobius), a middle-management agent at the TVA, or Time Variance Authority.

Tasked with monitoring and preserving the multiverse, the TVA recruits Tom Hiddleston’s Loki, whose stealing of the Tesseract (which was seen in Avengers: Endgame, but technically took place just after The Avengers in 2012) has enabled him to muck up time and space. TVA agent Mobius becomes Loki’s manager in his quest to right his wrongs.

What could go wrong?

Unsurprisingly, there is a fun bit of comic book history for TVA agent Mobius M. Mobius. While he’s hardly the most prolific character in the Marvel Universe, he represents the stuffy rigidity of bureaucracy despite the cosmic, impossible-to-fathom scale of something like time travel. And the MCU is about to make him a far bigger deal than he’s ever been in the comics.

Here’s everything to know about Owen Wilson’s character in the MCU.

Loki: Who is Mobius M. Mobius?

Mobius M. Mobius was created by the legendary Walt Simonson, best known for his epic run on Thor (where Simonson also came up with the TVA a few years earlier). Mobius first appeared in 1991, in Fantastic Four #353 and #354. He was assigned to reprimand the Fantastic Four for crimes against time, including “continuity theft,” but the Fantastic Four slipped past Mobius.

Though Mobius was in danger of losing his job, he wound up with a big-time promotion (in Fantastic Four Annual #27) to executive manager. Mobius has been the de facto face of the TVA ever since. That’s actually literally true, as most bottom-rung TVA employees are faceless (think shopping mall mannequins) since they spawn any time a new reality is created. But managers like Mobius actually get a face, one that was playfully modeled after veteran Marvel writer Mark Gruenwald, who held a long stint at Marvel that lasted from 1978 until his death in 1996.

With his long history at Marvel, Gruenwald was Marvel’s in-house continuity expert and fact-checker. Simonson created the TVA as an in-joke for Gruenwald. When Gruenwald died, the TVA — all staffed by managers who have Mark Gruenwald’s face — maintained authority in the Marvel Universe as a tribute.

While Owen Wilson bears little resemblance to Gruenwald, you should probably expect some kind of Easter egg referencing the original face of Mobius M. Mobius somewhere in Loki.

Mobius may show up elsewhere in the MCU

Mobius M. Mobius has no superpowers, and relatively speaking, keeps an extremely low profile with barely ten comic book appearances to his name.

But Mobius has authority and isn’t afraid to use it. He has used it most notably alongside the Fantastic Four and She-Hulk, where Mobius was a judge involved in She-Hulk’s trial, who was in trouble for warning Hawkeye of his impending death which would alter the timestream.

You know which two Marvel characters have upcoming shows on Disney+, don’t you?

Given his tie to both She-Hulk and Hawkeye, is it possible we’ll see Wilson pop up in their series, due out in late 2021 and in 2022 respectively? Stranger things have absolutely happened and, given what we know of Marvel, will certainly continue to happen.

Mobius hasn’t been seen in the Marvel Universe for over a decade. But with Owen Wilson about to bring the obscure character to the streaming masses, it’s only a matter of time before someone at Marvel approves of a solo Mobius comic — or, at the very least, some near-future appearances in She-Hulk and Hawkeye.