“Deeper Magic From Before the Dawn of Time” 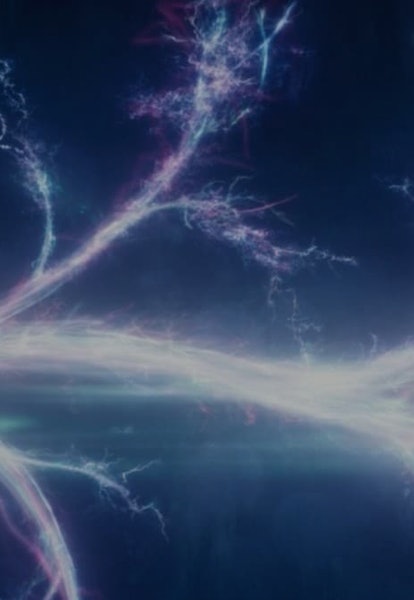 Loki was supposed to be all about mischief, but in the end, it became the Marie Kondo of the Marvel Cinematic Universe.

A chaos god suddenly obsessed with organizing the universe? This does not spark joy.

In Loki’s Season 1 finale, Tom Hiddleston’s begrudging anti-hero came face-to-face with a cosmic conundrum: is it better to keep the universe tidy, or give everyone across the multiverse free will at the risk of a giant war?

Loki didn’t quite answer its own lofty questions, but with a cliffhanger leading into Season 2, it did seem to establish a different type of philosophy for Marvel’s streaming series in general. When it comes to endings and “big” reveals on Disney+, Marvel clearly has zero free will. Each of the three big MCU shows has relied, more or less, on the same storytelling cliché. And it might be time for this to stop.

Spoilers ahead for Loki, WandaVision, and The Falcon and the Winter Soldier.

Unlike WandaVision or The Falcon and the Winter Soldier, the Loki finale was initially laudable not because of what it did do, but perhaps, what it didn’t. Although there was some requisite stabbing and punching, the episode wasn’t action-packed. Instead, the two main characters were mostly sitting down and being told what was really going on throughout the entire show. Though we were never once told about He Who Remains (Jonathan Majors) prior to this episode, this all-powerful time lord of the MCU was revealed to be the person pulling the strings all along.

Majors didn’t get a snappy theme song like Agatha Harkness, but the reveal was essentially the same as what happened in WandaVision Episode 8. One character told the audience what was really happening, and this deus ex machina drove the rest of the story. WandaVision then stacked these abrupt resolutions in its actual finale by bringing in a literal god-like machine in the form of White Vision and then randomly revealing that Wanda knew how to cast runes in the sky.

In Loki, the lecture Sylvie and Loki get from He Who Remains is similar. It’s a giant info dump that boils down to a gibberish phrase, which suddenly becomes “the key” to understanding the show’s whole shtick. In WandaVision, it was the random phrase “chaos magic.” In Loki, it’s “multiversal war.” When you were a kid, The Lion, the Witch, and the Wardrobe barely got away with this when it evoked “Deeper Magic From Before the Dawn of Time” and randomly brought back Aslan with some hand-wave nonsense that had not been previously set up at all.

Loki and the preceding Marvel shows are different from The Lion, the Witch, and the Wardrobe insofar as they’re actually designed to obscure these behind-the-scenes masterminds. Sure, WandaVision dropped hints that it was Agatha, and everyone saw the Sharon Carter Power Broker twist a mile away. But all these reveals have one thing in common: They artificially raise the stakes by being kept a secret.

The reveal of He Who Remains is the most egregious of all because a character we never met swept in and stole the agency from everything the characters have done up until that point. (Even Loki becoming a variant was apparently part of this master plan.)

The writers of the series (and those who loved this episode) would be quick to argue that this is the point. Loki is all about whether or not free will exists. So the argument would go that having a character come in and steal agency and choice was actually earned because the show can’t stop talking about the possible illusionary force of free will.

But defending the utterly convenient and circular info dump from He Who Remains on the grounds that it philosophically checks out with the rest of the series might not really be a compliment. If you take his kind of thinking too far, you can justify any sloppy cliché or worn-out writing trick simply because the show owns that idea.

Just because a concept is lampshaded, doesn’t mean the writers got away with it. People still care about what happens to characters and simply changing the context — and then arguing this has been the context all along — isn’t the same as having a plot.

Arguing Loki is playing with the implications of cause and effect and free will is a little like saying the scene between Neo and the architect is Matrix: Reloaded is deep. Sure, if you’re high and 17-years-old, maybe. But when you present characters with dead-end or contrived choices, the stakes automatically go down because, on some level, the audience no longer cares about who pushes the falling dominos.

Loki’s early reveal that the TVA existed outside of the rules of Thanos and the Infinity Stones was great and well earned. The reveal that there’s another, higher power that uses the TVA as a front is absurd. Why would He Who Remains even need to hide? As the finale suggests, you can easily imagine a situation where he doesn’t create the myth of the Time Keepers and just tells everyone the truth. The idea that He Who Remains hides behind the myth of the Time Keepers only exists because the show is written to create a second reveal about who is really running things. Where does this end? Is it turtles all the way down?

Just because a show asks questions about free will doesn’t mean the finale should insult the audience by telling them, yes, essentially, everything you watched for the last five episodes is meaningless. Loki takes this kind of intelligence-insulting one step further when He Who Remains says that the characters have “to be changed by the journey,” referencing another cliché idea of Joseph Campbell’s Hero’s Journey, a mythological construct so played out that even talking about subverting the Hero’s Journey is played out.

This anti-Hero’s Journey discourse gets trotted out — “we’re all villains here” — insinuating that Hero’s Journeys and Villian’s Journeys are pretty much the same. This is all fine, but the on-the-nose dialogue is frustrating because it allows the ideas rather than the characters to take over.

At some point in Loki, the characters begin talking like cultural critics discussing the meaning of the work, rather than actually saying things relevant to their situation. The vibe here is Metaphysics 101, and the only actual action taken by anyone was to depict a white woman murdering a Black man to make a point about free will — or something. (Note: Falcon and Winter Soldier also depicted a white woman killing a POC, to preserve an arbitrary mystery box. Yes, the show commented on this, but was it necessary?)

The concept of alternate versions of He Who Remains controlling the multiverse is exciting superficially, but that’s mostly because Jonathan Majors is an electric performer. The cost of bringing in this new character and excellent actor means the pseudo-intellectual stakes presented in Loki Episode 6 have now been reduced down to, “Oh well, Loki has to beat the bad guy now, right?”

He Who Remains has become another cliché Marvel villain who basically achieved his ultimate Dark Side Power because he got Sylvie to stab him through the chest. The show’s message is clear: the battle for free will has just begun. Some people (Loki) seem to have a little bit of free will, but all those other people (Mobius, Hunter B-15, et al.) basically no longer exist. At least not as we knew them.

The struggle for individuality might be the aim of these plotlines, but the actual result is bewildering. If nothing the characters do matters — and an unexplained deus ex machina is waiting in our future — what are we even watching for?

Free will might exist, but if we can’t call out these soap-opera-level plot tricks, do we even have free will as Marvel fans? Or are we doomed to watch every show and movie the studio releases, no matter how lazy the writing becomes?