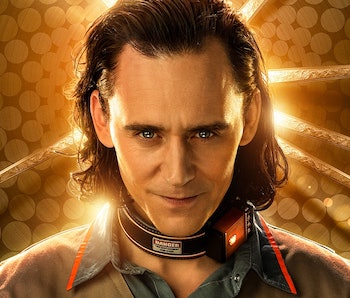 Loki is on the run, but perhaps not fast enough. Based on his daring escape in Avengers: Endgame, one might expect the upcoming Marvel series Loki on Disney+ will begin with the Asgardian immediately causing chaos in the timestream. But a new leak suggests Loki’s very next steps after Endgame not as chaotic as you would imagine.

What Happened? — This week, Hasbro unveiled its tie-in “Marvel Legends” toys for Loki, the upcoming Disney+ series in which Tom Hiddleston will reprise his popular movie role. You can pre-order Loki figures (due to ship August 1) on Hasbro’s official website.

The packaging for the toy comes with a plot synopsis of the series, which is typical for all movie and TV licensed toys. But the specific phrasing of the summary reveals insight into the series that wasn’t previously confirmed.

While it’s clear Loki takes place after Avengers: Endgame (though technically after 2012’s The Avengers due to Endgame’s time travel story), it was assumed that some time passed between Loki’s escape and his arrest under the Time Variance Authority (TVA). But the synopsis on the Hasbro figures provides more detail on Loki’s arrest, with bolded emphasis from us:

“Mere moments after his escape during the events of Avengers: Endgame, Loki is apprehended by the Time Variance Authority (TVA) and arrested for his crimes against the ‘sacred timeline.’”

So, what is it that the TVA is arresting Loki for, anyway? And what crimes did he commit against the timeline if Loki hasn’t done anything to begin with? Curious, indeed.

Which brings us to the second thing: “sacred timeline,” an interesting phrase. While it’s yet another connection to the X-Men via the character Tanya Trask (whose mutant powers to manipulate time gave her the name “Sacred Timeline”), it more likely could mean the preservation of a timeline Loki disrupts.

After all, Loki should be dead. Thanos killed him in Avengers: Infinity War. If Loki has escaped, maybe the timeline is in disarray due to the anomaly of a living person who should be dead.

The Inverse Analysis — The toy packaging of Loki fuels my personal theory that Loki is, at its core, a show about fate and destiny. Loki is a trickster by nature, but now he is forced to confront an inevitability he can’t cheat his way out.

While Loki is primed to be a sci-fi comedy on its face, at its core, it might be more thoughtful and ruminative than it looks. Honestly, a show with deceptive advertising is a pretty Loki thing to do.