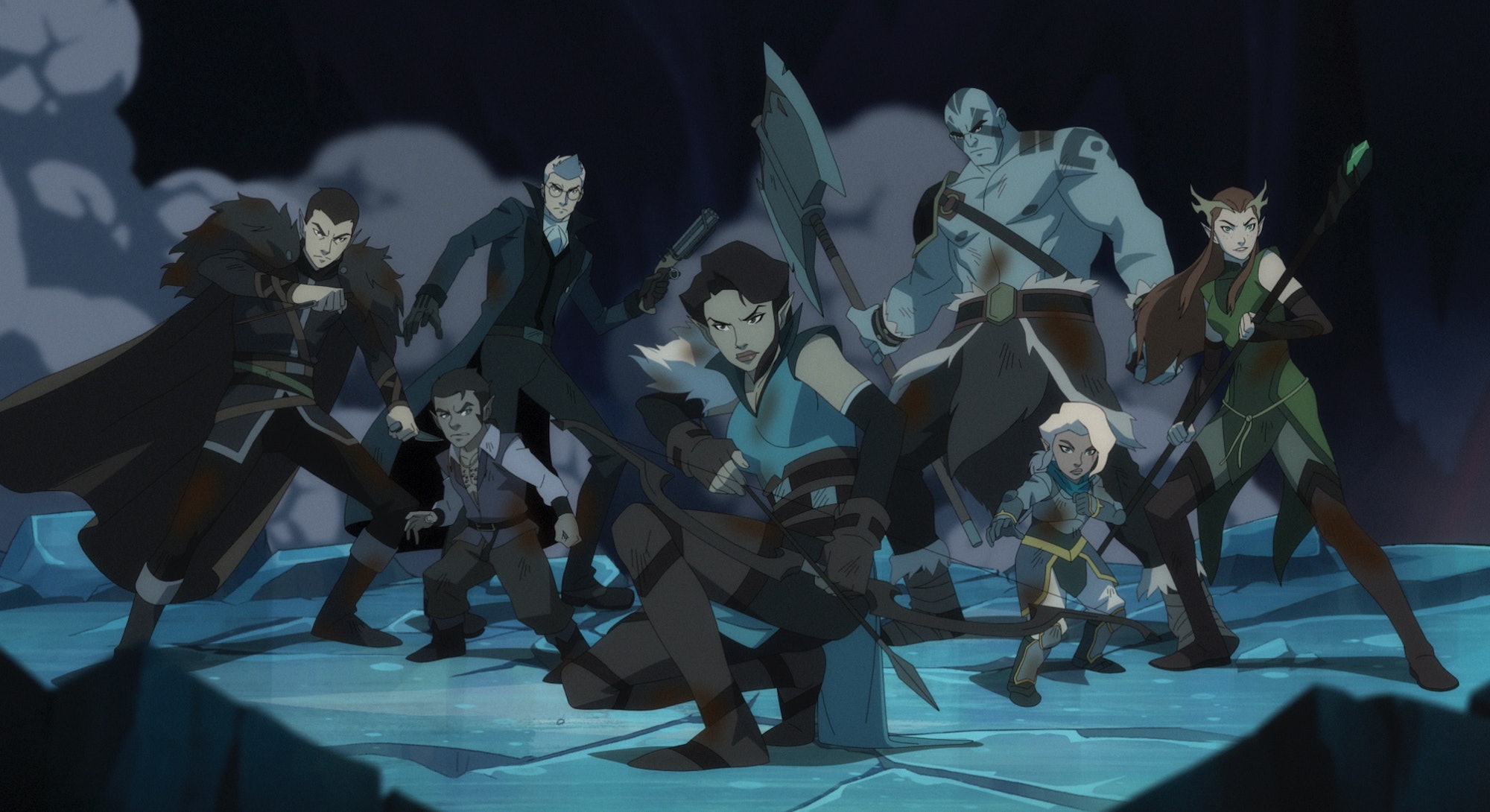 Stretches of The Legend of Vox Machina almost feel like it’s watching someone play Dungeons & Dragons.

That’s exactly how it was conceived, it turns out. But a poor show can only lead anyone to think playing D&D themselves is a more productive option. Thankfully, through fine execution overall, The Legend of Vox Machina never feels like it’s rolling with weighted dice.

Exceeding past its novelty as an adaptation of a Dungeons & Dragons livestream show, The Legend of Vox Machina for Prime Video spices up the booming fantasy genre with stunning artistry and real heart and humor. Its first bits of dialogue are a panicked, uncensored “What the f*ck?” and minutes later, a gnome with chest hair goes down on a naked elf.

Such humor rarely negates the exciting dark fantasy action that lies ahead. Nor does it disserve its meaningful themes of found families, revenge, and the self-serving exploitation wrought by the elite upper class. But its unique mischief christens Vox Machina to be more bold and riotous than anything else streaming today.

The Legend of Vox Machina is based on the first serial adventure of Critical Role — both the group of professional voiceover artists who began playing Dungeons & Dragons for the burgeoning livestream internet in 2015, as well as the live show they produce on Thursdays. The new series, streaming January 28 on Amazon Prime Video, is a familiar story wrapped in unfamiliar packaging.

Voiced by Critical Role’s Laura Bailey, Ashley Johnson, Liam O’Brien, Taliesin Jaffe, Sam Riegel, Travis Willingham, and Marisha Ray, seven rag-tag adventurers embark on a quest to survive in the realm of Tal’Dorei. For years, these same actors created and played as these characters for live viewers on Twitch. For Vox Machina, this rare experience enables dynamite performances that the craft of voice acting rarely affords.

In a “let’s get this out of the way” sort of deal, the group’s first task is to slay a dragon. You know, in a dungeon. But when they later meet a noble family of vampires, their real fight begins.

Much of Vox Machina is evocative of Avatar: The Last Airbender and Netflix’s Voltron, both in spirit, execution, and even its “western anime” visual design that is often gorgeous to look at. (Unlike those other shows, there are buckets more bloodshed, profanity, and nudity that might raise eyebrows to anyone expecting a more straightforward fantasy epic.) Like Voltron, Vox Machina descends from a complicated lineage that connects both a popular livestream and Dungeons & Dragons, a nearly 50-year-old tabletop game. Yet, like Avatar, it effortlessly turns complicated lore into broadly accessible ideas.

Of minor consequence is there’s not enough originality in Tal’Dorei itself, with many of its corners indistinguishable from any other sandbox universe. This isn’t a strong mark against Vox Machina. Its RPG roots mean there will always be some level of derivation. But, unfortunately, such an interpretation of Critical Role master Matthew Mercer’s imagination — a rare breed of Dungeon Master who alone sets unrealistic expectations for everyone else in the hobby — doesn’t pop onscreen in the way it should. (It still looks beautiful, though, a towering testament to animation studio Titmouse.)

The consequences of Vox Machina’s potential popularity are enormous.

That’s not to say there isn’t gravitas to Vox Machina; the story of Percy, the gunslinger who wrestles against his lust for revenge, is astonishing to witness. But the lines differentiating comedy and parody blurs too often, especially at how frequently the show flips its tones.

Despite its sourcing from a long-running Twitch show, The Legend of Vox Machina stands as an accessible thing by itself. At its heart, Vox Machina is an action fantasy, only unusual in its marriage of Tolkien-lite settings and the lurid humor of a Deadpool comic book. (This is arguably where the show’s D&D nature takes the strongest root.) With more in common with Rick and Morty and Invincible than Arcane, its alchemy of unlikely flavors goes down smoother than anyone could expect. However, one may question how serious or satirical everything is meant to be. Still, there is plenty of magic in its sum total, even if it lacks power in its individual parts.

Seven years ago the internet fell in love with Critical Role. Now it’s a TV show, and it’s a very good one. On its own, that’s an achievement. But the consequences of The Legend of Vox Machina’s potential popularity are enormous; we could be inching towards a future where RPGs like Dungeons & Dragons are more commonly understood not as a game but as a laboratory for fostering creativity as a trained skill. Or maybe not.

It’s still probable that D&D will always be a fun hobby creative folks spend free time playing, and The Legend of Vox Machina is just the result of an improbable equation. But given how good the show turned out to be, all that’s certain now is that fate can change with the roll of the dice.

The Legend of Vox Machina will begin streaming on Prime Video on January 28.