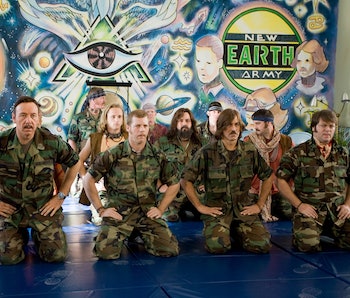 In a luxury hotel in Kuwait, a newspaper journalist played by Ewan McGregor, freshly divorced, sits face to face with a salt-and-peppered retired soldier, Lyn Cassady. He's played by George Clooney. I could describe Cassady with color like "his gruff voice and masculine, '70s cop mustache," but, he's George Clooney. And George Clooney tells Ewan McGregor all about the U.S. military's alleged training of psychic soldiers called "Jedi Warriors."

This is The Men Who Stare at Goats, a tremendously funny gem that slipped by the late 2000s glut of Judd Apatow-style studio comedies. In contrast to movies like The Hangover, which cranked its volume to eleven at the sacrifice of rhythm and melody, Goats isn't as strange as it wants to be but it's way less vanilla than it seems. Sort of "Coen Brothers Lite," The Men Who Stare at Goats is a rollicking, ridiculous satire in which a reporter uncovers an apparently real piece of American history: The U.S. Army's applications of New Age philosophies, counterculture psychology, and paranormal phenomena into intelligence-gathering operations. To quote a black title that plays at the top of the movie, "More of this is true than you would believe."

It's streaming on Netflix until March 3, which gives you the weekend to watch and enjoy a picture that deserves to be a 21st-century classic.

In The Men Who Stare at Goats, a writer (McGregor) travels with a retired soldier (Clooney) who reveals to him the story of the New Earth Army (its real name was the First Earth Battalion), an experimental program that aimed to create the world's first class of warrior monks. A line in the movie, delivered by Jeff Bridges channeling his Dude from The Big Lebowski, tells a group of men in army fatigues, "We must become the first super power to develop super powers." One of the most prominent examples of these powers, explored in the movie, is telepathy, in which soldiers tried to kill goats using psychic powers.

I truly do not know if the U.S. Army really tried to create Jedi Warriors. I don't think I want it to be real. The movie was based on a 2004 nonfiction book by journalist Jon Ronson, and there exist other documentaries where people have gone on the record swearing all of it was real.

But it doesn't matter. The point is that the film, directed by Grant Heslov, is a Rorschach test. It's a tool that gauges your tolerance to bullshit about what you're willing to believe, what you refuse to believe, and how funny figuring all that out can be.

Maybe it's the comedic timing of its killer cast; Goats boasts a murderer's row of funny men, not just Clooney and McGregor but also Jeff Bridges, Nick Offerman in a small role, and tough-guy character actors Stephen Lang and Robert Patrick. (The elephant in the cast is Kevin Spacey, a "snake in the garden" who causes the entire program to come undone.) Maybe it's Peter Straughan's sharp-as-a-razor script. Maybe it's all of the above.

All I know is that The Men Who Stare at Goats, with lines like "I can hear the man inside me, and he was screaming like a little girl" and "The world needs the Jedi more than ever" are under-appreciated bits of brilliance that deserve to be spoken with as much frequency as lines from Airplane! and Caddyshack. The Men Who Stare at Goats ain't perfect because no movie ever is perfect. But it's a smart buddy movie about the limitations of bullshit. And in times like these, we really do need the Jedi more than ever.