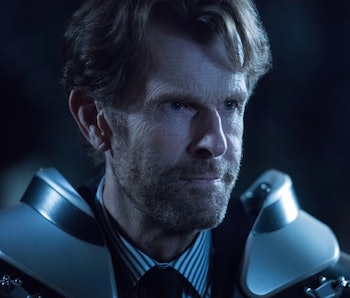 Kevin Conroy, the voice of Batman since he starred in the defining Batman: The Animated Series, has died. He was 66 years old. His death was confirmed by fellow co-star Diane Pershing on Facebook, producer Paul Dini, and Warner Bros. Discovery, which issued a press release.

Though an actor of both the stage and screen, with credits in touchstones like Dynasty, Matlock, Cheers, and Murphy Brown, it was his unforgettable voice-over role as Batman — and by extension, the debonair Bruce Wayne — that made Conroy a legend. Even after the series ended in 1995, Conroy kept lending his voice in a plethora of Batman media, including spin-off shows, movies, and blockbuster video games. His co-star Mark Hamill, who played the Joker to Conroy’s Batman, once remarked he would sign on to any Batman project so long as Conroy was involved.

It was more than just his voice that made this Batman feel immortal. Conroy knew what was in Batman’s heart. A gay man born into an Irish Catholic family, Conroy spent his adulthood living through the AIDS crisis — he told the New York Times in 2016 he went to “so many funerals” — and worked overtime to keep his secret identity. The slow death of his alcoholic father, once found bleeding to death with a knife and empty bottle on his person, was as devastating to him as the gunshot that killed Bruce Wayne’s family.

It was the depth and dimensions of Conroy’s complicated life that gave him the textures to be Batman. In his transcendent performance, there was the weight of cold strategic analysis and red-hot vengeance, all of it palpable in his baritone voice and the solemn masculinity of his speech. Conroy’s Batman made you feel assured in bearing witness to the smartest, most prepared person in the room. He also made you afraid, as the last person you’d ever dare cross.

Conroy knew to use two different voices when playing Batman and his public alter ego, Bruce Wayne. While Batman film star Michael Keaton applied a similar method in live-action, Conroy was the first to apply this to animation. “I thought dramatically it would just give the story more color,” Conroy said in a 2009 interview, “make it more interesting if there was an auditory difference that would make sense why people don’t recognize him when he’s in this mask and this cowl who know him as Bruce Wayne.”

It helped that the material gave Conroy the canvas he needed to create art. Batman: The Animated Series is rightfully remembered as one of the most celebrated superhero shows of all time, with its humanistic storytelling that was as exciting and thrilling as it was funny, tragic, and heartbreaking.

In one memorable episode, Batman takes it easy on the mischievous Harley Quinn, who spends the episode trying and failing to redeem herself. At the end of the episode, Harley asks Batman why he even bothered “for someone who’s never given you anything but trouble?” Conroy’s Batman simply replies, “I know what it’s like to rebuild a life. I had a bad day too, once.” This profound writing is only outshined by the show’s arresting art deco style that, maybe more than Tim Burton’s theatrical films, best visualized the platonic ideal of Batman. But these are only memorable because of Conroy’s gravitational performance, fostering a symbiotic relationship that feeds into the legend.

Kevin Conroy only played Batman once in live-action, in a scene-stealing guest role in the TV special Crisis on Infinite Earths. Even when the script lacked the oomph of The Animated Series, Conroy proved just how much he knew Batman to his core, even without having to wear a cape.

A now-popular story Kevin Conroy first told in the DVD commentary of the 2008 animated film Batman: Gotham Knight was how he used Batman to boost the morale of first responders at 9/11. In the days after September 11, 2001, Conroy was in New York City as a volunteer cook for police and firefighters. When another cook learned he was working next to Batman, he dared Conroy to prove it. The actor belted out his most famous line — “I am vengeance, I am the night, I am Batman!” — to rapturous applause. It was the first time he’d seen people smile all that week.

In 2015, I asked Kevin Conroy to elaborate on this memory. He told me:

“It was a highly emotional period. In that moment when someone in the kitchen recognized me and said, ‘Hey guys, Batman’s been cooking your dinners!’ Everyone roared and started clapping. It was such a great moment of release from all of that tension. It made me realize that the people who work in animation, you know, we’re not wasting our time. That it means something.”

In 2022, for Pride Month, Conroy penned “Finding Batman,” a mini-memoir about his life and audition for Batman in the DC anthology comic DC Pride. In it, Conroy recounts his difficult upbringing as a closeted man navigating contemporary prejudices. At times, it even almost derailed his career.

In the comic, Conroy confessed he knew very little about Batman. But when given the broad strokes of who Batman was to be in the series, a being who overcomes adversity and loss whilst keeping a secret life, Conroy writes, “This is terrain I know well.”

In our 2015 interview, Conroy mused on Batman:

“He’s the ultimate tragic hero who rises above his own adversity to do pure good for the world. He wants complete anonymity. He wants no one to know he’s doing it. It’s just a kind of altruism that’s so pure. Young people and older people, so many different ages, relate to this guy, especially young people though. They invest so much emotion in him because he’s a cartoon ... I find that audience members create a much more intimate relationship with him than they do with live action characters. There’s an intimacy with that man.”

After three decades of using his voice, Conroy is undeniably one of the finest artists to ever give Batman life in any medium. In his life, Kevin Conroy played a hero. In his death, the dark knight rises.