“I think there will be a ticking, rolling body count” 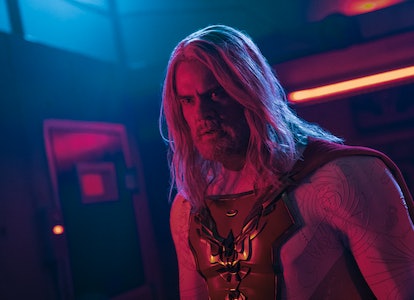 The Union lives by the “Code,” but for how much longer? This is the question that lingers at the end of Season 1 of Jupiter’s Legacy, the newest live-action superhero saga on Netflix. But what lies ahead in Season 2?

While Jupiter’s Legacy doesn’t have a Season 2 release date — it hasn’t even been renewed yet by Netflix — it’s no secret that the streaming giant is better big on Mark Millar’s comic book creations. Millar tells Inverse the series could last for five seasons. Here’s everything we know about the show’s future, based on our interviews with the cast and crew along with the original comics.

Warning: Spoilers for Season 1 of Jupiter’s Legacy and the comics it’s based on are ahead.

Who is the secret villain of Jupiter’s Legacy?

Based on Mark Millar’s 2013 comic book series, Jupiter’s Legacy is a tale of conflict between the world’s greatest superheroes, the Union, and the next generation of powered humans. While the Union’s leader, the Utopian (Josh Duhamel) adheres to a rigid “Code” — “Service, compassion, mercy,” he tells his young daughter Chloe, played as an adult by Elena Kampouris — the rest of the Union grows weary as the 21st century forces them to make harder decisions.

At the end of Season 1, audiences learn that the absent villain Skyfox (Matt Lanter), a former member of the Union who turned on his fellow crusaders, isn’t behind (all) the machinations of the plot. Unbeknownst to the Union, it wasn’t Skyfox who cloned Blackstar. It was Brainwave (Ben Daniels), who knew it would drive a wedge between his brother, the Utopian, and his ambitious but brash son, Brandon (Andrew Horton).

“And why would I do such a thing?” Brainwave rhetorically asks his daughter, Raikou (Anna Akana in a guest role). She replies, “You wanna split apart the Utopian from his son. That creates instability within the Union. Instability that will force new leadership.”

That’s right: Brainwave, not Skyfox, is behind the Union’s current conflict, which he’s artificially creating in order to take over leadership of the Union and implement what he believes is a more modern method of enforcing justice worldwide.

The Utopian is a dinosaur, and Brainwave seeks to bring superheroes to the modern world.

What happened in the comics?

The ending of the Netflix series lays the foundation for a comic book moment that will probably be the show’s equivalent of the Red Wedding in Game of Thrones: Violent betrayal.

In issue three of the comics, a calculating Brainwave manipulates his nephew Brandon and gets him to kill his own father. His mother, Lady Liberty, is also brutally murdered by Brainwave and other superheroes who are exhausted by the Union’s too-rigid rules.

But while Brandon and Brainwave kill the Utopian and Lady Liberty, Chloe manages to escape the bloodthirsty superheroes with her boyfriend, Hutch, who carries a magic rod that lets them teleport anywhere. The two escape and build a life together in secret, giving birth to a son who grows up to fight the Union with his own superpowers.

The Netflix series hasn’t gone this far in the story. All of it is likely being saved for Season 2, possibly even Season 3. While Brainwave’s intentions are revealed in the series, it isn’t known to anyone else, including Brandon. The only one who knows, Raikou, was killed by Brainwave in a way that ominously foreshadows how Brainwave will succeed in his plans.

As far as the Netflix series is concerned, Brandon’s resentment for his father is only heating up after their fight against Blackstar proves the “Code” means more to the Utopian than his son.

While Season 2 of Jupiter’s Legacy is not yet confirmed, we asked the cast of the Netflix series to guess what might happen next should Netflix’s first big superhero gamble in years continue on.

What’s next for Chloe and Hutch?

Readers of the comics know that Chloe and Hutch are a pair. The two give birth to a son, who grows up to fight back against Brainwave and Brandon’s new, tyrannical Union.

Elena Kampouris and Ian Quinlan, who play Chloe and Hutch, both tell Inverse that things are only going to heat up between the two of them to closely follow the plot of the comic. “We’re pretty steamy,” Quinlan jokes to Inverse. “I don’t see that slowing down any time soon.”

“They can’t get their hands off each other,” adds Kampouris. “That’s why we need Season 2. We gotta explore that.”

What’s next for Brandon?

Actor Andrew Horton plays a different Brandon than the one in the comics. Whereas the comics have an aloof, rebellious Brandon, the Netflix series has Brandon aspiring to fill in the shoes of his father. He goes by his own superhero identity, “Paragon,” with even his own costume.

But Horton is hoping to go dark. In reference to Brandon’s betrayal in the comics, “I want to do that to the Utopian,” Horton tells Inverse. “The series gives Brandon backstory we don’t see in the comics. You see a more naïve, earnest Brandon rather than the disillusioned, angry, and embittered version we see in the comics. I want to see that journey into darkness and really become a villain.”

Adds Horton, “That’s a dream for me as an actor to play a villain.”

What’s next for Lady Liberty?

Leslie Bibb, who plays Grace/Lady Liberty in the Netflix series, is also familiar with her character’s brutal demise. “If there’s a Season 2, it’s going to get interesting,” Bibb tells Inverse.

While Lady Liberty has a short lifespan in the comics, Bibb says she gets to flesh out her character beyond the page. “It was incredible to create this woman in a three-dimensional way,” she says. “I sunk my teeth into who she was as a journalist. The fact she was doing so in 1939, when most women were getting married and she was picking a career. I felt a connection to this woman. I was inspired by her creativity and truth-seeking.”

Citing movies like His Girl Friday (1940) and Raiders of the Lost Ark (1981), Grace was someone with “gumption,” Bibb says. “She was a lioness. I was excited to make her more formidable than she was in the comics. I think we need more women like her in the comic book world.”

What’s next for the Utopian?

Josh Duhamel, who stars as the stalwart Sheldon Sampson/Utopian, also knows what awaits him. “I think anybody who has read ahead knows the fate,” Duhamel tells Inverse. “That’s what I loved about this when I read the script. You get an idea of the texture from the comic book, but we really delve into the psychology of who these people are and what the repercussions are 90 years later. You see the origin stories and how it’s affected them all these years later.”

Adds Duhamel, “That’s what I loved about it: The family dynamics. The regret, the betrayal, the distrust, all these things you feel as the unraveling of this family. And him desperately trying to hold on and reconnect after having not done that for so long.”

Which is why, Duhamel says, it will be hard for the Utopian when the inevitable happens.

“It’s going to be crushing,” he adds. “He’s learning he’s spent his life on this mission to make the world a better place, only to have his kids not want anything to do with him and his brother turning on him. That would be crushing. ‘What was it all for? What did I do this all for?’ It’s got the makings of a modern tragedy. If you don’t have your family, what do you got?”

What’s next for Skyfox and Brainwave?

Last but not least, there’s Skyfox and Brainwave. Actor Matt Lanter has his own theory about his character Skyfox’s dark turn, and how it all draws roots in Walter, aka Brainwave.

“I think Walter positioned George to be the world’s greatest supervillain,” Lanter tells Inverse. “He’s done a fantastic job convincing the people around him, who then convinced the world around them. That’s my take. We’ll see where it goes.”

Daniels agrees with the theory, for his part. “I think Walter holds a grudge,” the actor says. “He puts up with a lot in the trenches, and it goes in deep. As soon as he can position himself and get someone out of the way, he’s going to do that. All for the good of the world, of course.”

As played by Daniels, Brainwave only appears to be the caring uncle to Chloe and Brandon and loyal brother to the Utopian. But behind closed doors, he’s plotting to take over the Union.

Daniels tells Inverse how deep he went into the role of a mastermind.

“I talked to Mark Millar a lot, I used the comics to build,” he says. “I read a crazy amount. Machiavelli’s The Prince or The Art of War to look at military strategy. I learned to play chess because I think that’s how [Brainwave] uses his mind. He positions everybody over a hundred years to get to the right position where the world can be his.”

But why is Brainwave annoyed by his brother? “I think Walter is annoyed by the Code, because his brother has stopped listening,” Daniels explains. “He’s become this rigid force. The world has changed. It’s a different place than in the ‘20s when we were given our powers. It needs to be something else, and Sheldon has dug his heels in. I think that is why everything happens.”

Soon, even more will happen as bodies hit the floor in Jupiter’s Legacy, and it’s going to get messy. Says Lanter, “I think there will be a ticking, rolling body count.”

More like this
Entertainment
Jan. 20, 2023
Surprise Invincible Season 2 trailer reveals late 2023 premiere
By Eric Francisco
Entertainment
Jan. 18, 2023
Everything you need to know about That ‘90s Show on Netflix
By Claire Fox
Entertainment
Jan. 25, 2023
The MCU could bring back a hero from its most underrated TV show
By Dais Johnston
LEARN SOMETHING NEW EVERY DAY.
Related Tags
Share: