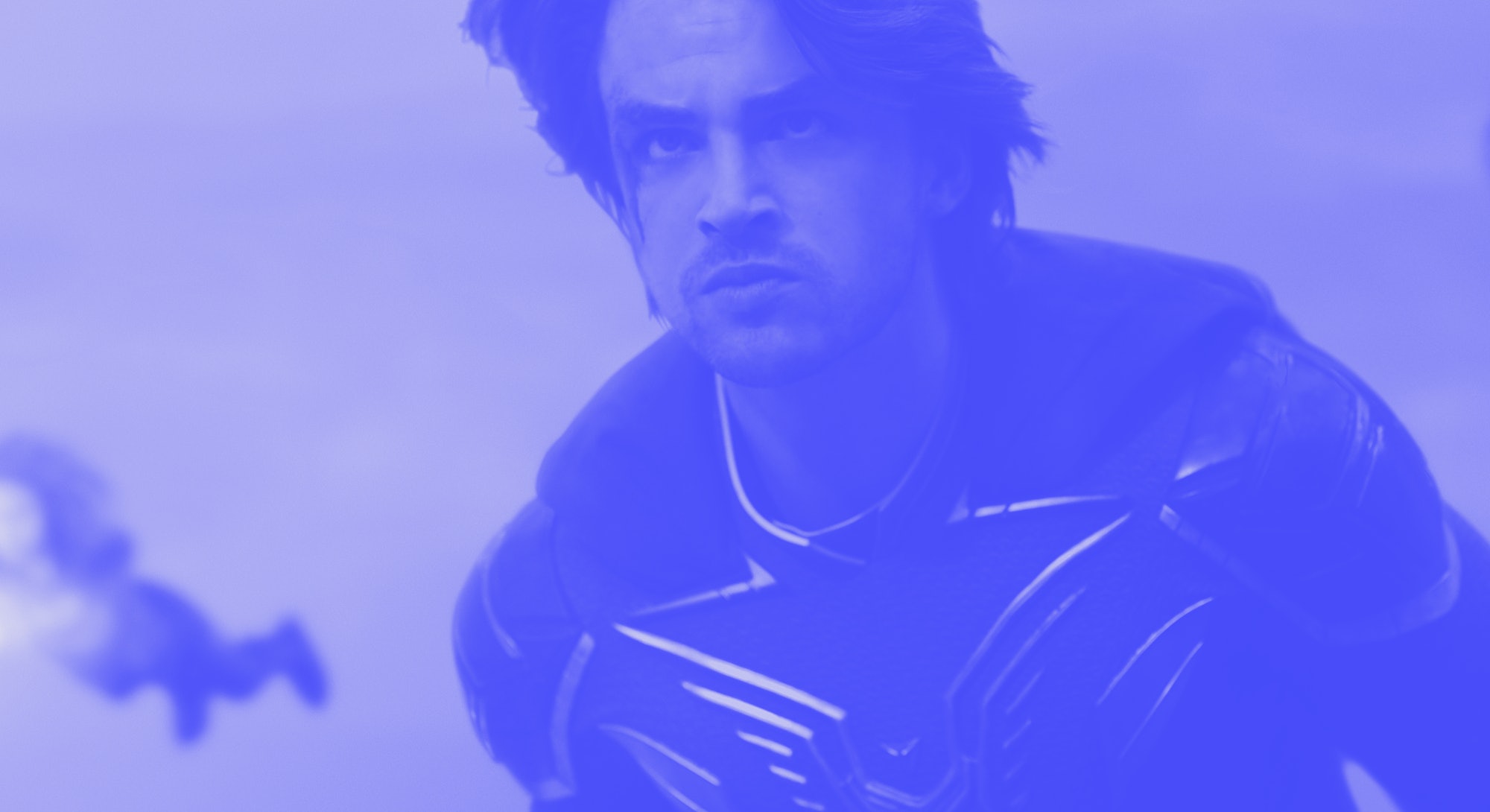 Think there's no room left for one more superhero show on your viewing list? Better make some space for Netflix's Jupiter's Legacy.

A flashy sci-fi fantasy adapted from Mark Millar and Frank Quitely's comic book miniseries of the same name, Jupiter’s Legacy surrounds the generational history of a family of superheroes keeping humankind safe for nearly 100 years. Now, this aging squad of caped crusaders known as The Union of Justice hopes to pass the torch to their children. But as tensions come to a boiling point, these super-powered kids struggle to live up to their parents’ reputation and strict code as villains from the past emerge to tear down the hierarchy.

Few characters feel the weight of legacy more heavily than Brandon Sampson, aka Paragon, the son of the Superman analog The Utopian (played by Josh Duhamel). Relative newcomer Andrew Horton is the actor tasked with bringing Paragon’s pain to life, a job made easier by the ways in which Jupiter’s Legacy aims at so many different goals.

“There’s a bit of something for everyone,” Horton tells Inverse about the superhero series. “It’s not exclusively appealing to just the comic book nerds out there and the superhero genre. You’ve got the history, the politics, and discussions about religion. It’s what makes an interesting series. It’s relatable to audiences. Then you’ve got the added bonus of some big fight scenes and people flying and shooting lasers from their eyes.”

In the middle of Horton’s highest-profile role yet (and one that stands to get even more controversial as the series wears on), Inverse spoke with the Jupiter’s Legacy star on the mounting pressure of this breakout Netflix series, the thrill of wearing Paragon’s superhero costume, developing the character beyond the comics, and more.

Inverse: How did you become attached to Jupiter’s Legacy?

Andrew Horton: So I auditioned for this series when I was in Vietnam with my girlfriend on a New Years holiday in 2019. This was my pilot tape of the New Year and we were in a really peaceful part of the country, which is famous for mountains and has one of the biggest peaks in Asia. It was raining the entire time we were there and completely fogged out so it was perfect conditions to read through a superhero pilot. I fell in love with it. I take my camera equipment with me wherever I travel and my girlfriend read opposite me.

A few days later we flew back and I got a call from [Jupiter’s Legacy producer] Steven DeKnight and it seemed like he was offering me the part but I didn’t want to count my eggs before they hatched. I had to wait a couple of days, probably the most nervous I’ve ever been in my life. It’s been 2 1/2 years from being cast to the show actually coming out, so I’m ready.

Which scenes did you actually read for while in Vietnam?

I had three scenes to audition with, one of which was the funeral scene in episode 2, which was an amazing scene to get for an audition. Another was a scene that was taken out because I think it would be too expensive with CGI. It was going to be a scene with Brandon and Walter where Walter was taking Brandon within a psychic painting, so you can imagine what a tech element that would have taken. Then the third scene was part of a conversation between Brandon and Chloe just after the family dinner.

So I had amazing material to work with. They’d been casting for Brandon for a long time and hadn’t managed to find anyone. It just so happened that I look quite like the character from the comic books. Steven DeKnight was the showrunner and the director, and he took the chance on me and I’m forever grateful to him for that.

“There’s a lot of superhero content out there ... it’s not slowing down.”

With similar comic-based superhero series on TV like The Boys, The Umbrella Academy, and Invincible, how does Jupiter’s Legacy stand apart?

While comic books like The Boys are similar in terms of the graphic nature, the key difference is really the focus on these familial relationships. That’s what we really focused on. It almost sells itself as more of a drama than it does a superhero series. And the fact that they marry so well together just makes it even better. There’s a lot of superhero content out there, and the good thing is that it’s not slowing down. The MCU just announced yesterday their whole plethora of new releases and people still love it. As long as we’re taking some of that steam and putting it behind our show as well, I think the future is bright.

I hope people will get invested in this story. It’s not just big action sequences and fighting and flying. It’s a real deep dive into human relationships and the complexities that make up a superhero. The main character, Josh Duhamel, The Utopian, he’s having therapy! That’s something that hasn’t been looked at before in a superhero world. I think the way that Mark Millar has written it is very new and exciting.

How did you prepare mentally and physically for the role of Paragon?

When I was cast, Steven DeKnight asked me to put on about 30 pounds of muscle in three months, which was pretty challenging. And before I got the part I was quite a slight guy. So for about a month-and-a-half, I was eating five thousand calories a day, and not all of it was clean. There was definitely a proportion of fat there for sure. But we cut that down once we got out to Canada where we filmed. I made this shake which has a double scoop of protein, oats, coconut oil, milk, and then a big spoon of peanut butter as well. It was so thick!

So I was training five to six days a week for about two hours a day in the gym. Then once we got to Toronto, we’d do two hours Monday through Friday for a month for stunt training. I absolutely love exercising. It’s really become part of my daily ritual. More than anything it’s to try and maintain some of the shape I did have so the journey is not so hard next time.

Paragon’s costume is a beautiful original design. What was it like to slip into the super-suit for the first time?

Oh, it was amazing. Lizz Wolf, our costume designer, did the best job at creating these incredible suits. The first time I went to her workshop in L.A. I could not stop smiling. She took me across the character wall with all the concept sketches and I just couldn’t believe the amount of work that went into every single thing.

With the older generation, you have the 1920s characters as well, so it was drawn from all these different inspirations. With Brandon, the idea was that because he’s this homegrown superhero and grew up with the legends of his father, that he would have created his own super-suit as almost an ode to his father. I just loved that idea.

With the chest emblem, the shoulders, the arms, and the leg pieces, they were all fantastic. Then of course you have the cape as well which I think weighed about 15 or 20 pounds. All of it was so beautiful. Then you have a muscle suit on underneath as well to give you that extra size. So that wasn’t all me, sadly. It made you walk a certain way and hold yourself a certain way. It’s a bucket list thing for me to get to play a superhero. Then it’s a completely original character and a completely original suit, so to own that was really special.

“There’s so much more in the past to explore.”

How did you develop Brandon Sampson’s character beyond the comic book page?

Going into it I assumed that Brandon would be as he would be in the comics, but what we have in the series is very much a prequel to the Brandon we see in the comics. He’s more earnest and he’s wearing these rose-tinted glasses to a certain extent of loving everything his dad does and totally sold on that world of being a superhero. His whole drive is training and wanting to be everything his father is and trying to impress him. With that comes a sense of dejectedness because whatever he does isn’t good enough for his father.

So there’s a certain loneliness to Brandon, a sadness, and a weight which he carries with him. Not only does he have the pressure of living up to his father’s legacy, but also has the pressure of taking over that legacy at a certain point. A lot of what I did was imbued with that sense of disappointment and being a disappointment. It could make me feel quite sad while I was going through these scenes and making notes on the character. You really feel for the guy in the first season. And by the end, he’s going on this journey of self-discovery as events unfurl.

His interpretation of the code is challenged and he begins to challenge his father, so it really sets it up nicely to go on that arc to then become that darker version of Brandon that we do see in the comics. That more disillusioned, petulant version of himself where he’s pretty much done with his father. I’m really excited to get to that stage.

Can you tease anything that might unfold for Jupiter’s Legacy season 2 and what’s in store for Brandon Sampson and Paragon?

I’m hoping to explore a bit more of the darkness of Brandon. For those who have read the comics, there’s a massive, life-altering event to come for Brandon and everyone involved within that universe of Jupiter’s Legacy. There’s so much more in the past to explore as well that’s looked at in the Jupiter’s Circle comics, of The Union and how they’ve come up through the years and made that legacy. Not only do you have the excitement of the past but the anticipation of the future as well. That’s probably what you can expect to come.