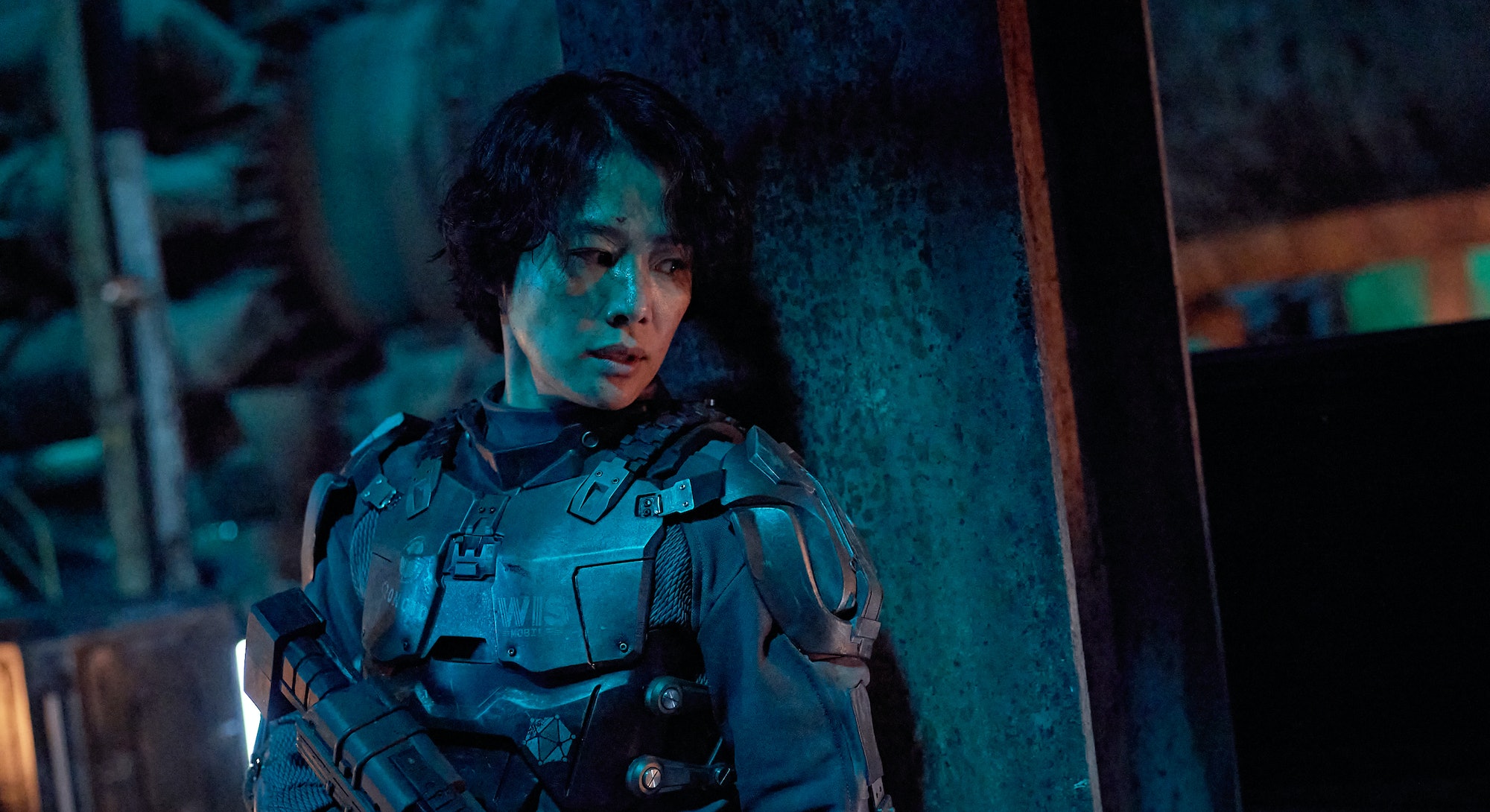 You have to hand it to Jung_E for being efficient: The South Korean sci-fi action flick wastes no time feeling like its own derivative Hollywood remake.

Since 2016, with the release of his third feature Train to Busan, director Yeon Sang-ho has enjoyed overseas fame for his rare ability to tackle Western genres through a South Korean filter. His latest film Jung_E, which boasts the simultaneously powerful and dubious global distribution of Netflix, is a bullet-riddled picture that strives to fuse family melodrama with the encroaching A.I. apocalypse.

But unlike his moving zombie feature Train to Busan and his socially-conscious superhero film Psychokinesis, Jung_E is plagued with buggy execution and often flat visual palettes that renders it Yeon’s weakest work to date. Despite occasionally mesmerizing effects work, compulsively enjoyable performances and action choreography, and a schmaltzy but effective undercurrent that affords the film a modicum of emotional depth, Jung_E collapses under its own ambition.

Jung_E opens with a mumbo jumbo of text exposition and never stops wobbling from there. It’s the future, Earth has succumbed to climate change like we knew it would, and mankind has ventured to the stars. But a 40-year civil war has encouraged a commercial lab to clone Yun Jung-yi (Kim Hyun-joo), a celebrity war hero left in a vegetative state. Her adult daughter, Yun Seo-hyun (the late Kang Soo-yeon) is the head of the “Jung_E” project that tries to harness Jung-yi’s brilliant tactical mind to create a new breed of artificial soldiers. But with the war coming to an end and the costly project failing to meet benchmarks, Seo-hyun makes a desperate attempt to salvage the only thing keeping her mother alive, so to speak.

In spite of delicious performances by co-star Ryu Kyung-soo, who plays a buffoonish figurehead unaware of his own secrets, Jung_E can’t outmuscle its worst traits. It’s less about its sputtering plot and illogical worldbuilding — both ripe for criticism — and more about the film failing to raise the question, “Why?” Jung_E is ostensibly a sci-fi centered on the brain, which uses the motif to explore tangential themes like identity, control, and the ephemeral sense of self. But when sandwiched by video game-esque action set-pieces, which vary in quality and pizazz, little of Jung_E carries the momentum needed to hold attention and inspire actual brain function. Even for non-Korean speakers, it’s easy to grasp the broad strokes of Jung_E as you doomscroll the latest nonsense on Twitter.

The film maintains some of the same features of its director’s past work, like the family-as-unit universality of Train to Busan to acknowledgements of stifling class structures as seen in Psychokinesis and even his TV show Hellbound. But Jung_E isn’t as hard-hitting as those, nor as skillfully made. Such arresting themes are undercooked in favor of the sentimentality of mourning, which doesn’t fully coalesce within the movie’s sci-fi framework.

There’s early promise of its ideas stinging with potency, like when Seo-hyun confronts her own mortality and is offered comically awful tiered packages to recycle her brain. But such overreliance on Seo-hyun as protagonist leaves things inert. Tragically, Jung_E marks Kang’s final role (she died in May 2022 of brain hemorrhaging); her death casts an almost ironic shadow given the movie’s portrayal of quiet desperation for the strength to hold onto all that we have to remember.

Jung_E is a heck of a work for Kang to part on. At its most moving Yeon wisely takes advantage of Kang’s abilities to reveal palpable pain and yearning, pushing the camera onto her expressive face when the moment arises. But those moments are few and far between, and Yun, as written, is woefully inadequate to propel the drama in any direction. “Jung_E” herself is infinitely more interesting — she’s a mind stuck in a never-ending simulation, with occasional, horrific peeks outside her synthetic reality — and a committed Kim Hyun-joo only makes her consistently absent presence aggravating. This should be her movie, so why isn’t it?

While fun in doses, especially in scenes set in futuristic hallways that resemble a high-budget episode of vintage Star Trek, Jung_E never ascends to the potential it promises. Bits of thoughtfulness and even tenderness can be found somewhere in its smooth surfaces. But Yeon’s latest is altogether a disappointment, lacking both the brain power and the beating heart that made his other movies so full of humanity. This one belongs in the scrap heap.

Jung_E is streaming now on Netflix.