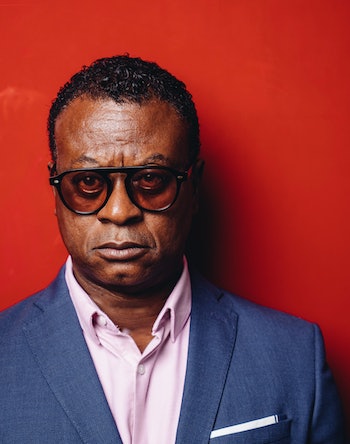 Leave it to Barbarian to top one of the most iconic deaths in horror history.

You know the scene. In Stanley Kubrick’s The Shining, Scatman Crothers arrives at the Overlook Hotel just in time to save the day — only to immediately wind up on the pointy end of Jack Nicholson’s ax. Forty-two years later, Barbarian borrowed heavily from The Shining when a homeless man named Andre, played by Jaymes Butler, steps in to save the protagonist and take her to his totally safe hideout — only for the monster to immediately break in, rip off Butler’s arm, and beat him to death with it.

It’s a standout scene in a movie full of them that works largely because of the work Butler does throughout to establish his relatively minor character. The actor and military veteran tells Inverse that he rewrote his own backstory based the personal experiences of him and his fellow soldiers.

“Before, he was like a guy who worked at like the Chrysler factory and lost his job, but I turned him into a vet,” Butler says. “And the reason I was able to do that is because [director] Zach [Cregger] gave me the room to do that.”

As for the whole beating him to death with his own severed arm, Butler says was a last-minute script change made by Cregger while they were filming the scene.

“Literally on the set, Zach goes, ‘We should have him beat you with the arm,’” Butler recalls through a wince. “I’m glad it worked out though.”

For these reasons and many more, Jaymes Butler easily earns his role as a member of Inverse’s 2022 Scene Stealers. Read on for his experience joining the cast, meeting “The Mother,” and what he hopes audiences will take away from his character in Barbarian.

Were you a horror movie fan before you took the role? And if so, any favorites?

I wouldn’t say that I was specifically a horror movie fan, but I’m a fan of movies, and if they happen to be horror movies and they’re good, then great. But one of my favorite movies was with Michael Ironside, it’s called Scanners. That’s one of my favorites, and of course, we have the famous It movies, the ones with Bill [Skarsgård]. Wasn’t a big Saw fan, though.

What was it like auditioning for the movie? How did Zach sell you on it?

I did the casting not really thinking if I’d get it or not, and at the time, I didn’t have the whole script, just the casting scene. But before I even talked to Zach, he sent me the script, and when I read it I just thought, “Whoa, how are they going to pull this off?”

So when we finally talked on Zoom, the first thing he told me was “Man, I love your casting. If you want to do this movie, the role is yours.” Then he went into detail about my character, and it’s funny because I kind of made him a vet. Before, he was like a guy who worked at like the Chrysler factory and lost his job, but I turned him into a vet, and the reason I was able to do that is because Zach gave me the room to do that.

How important was it to break expectations with how Andre’s character develops? How did you approach his first scene compared with the rest?

Actually, my first day of shooting was the first time you see me on screen. And the first time I did it, maybe I interpreted it a little differently, but I wanted him to be running up to her trying to save her from this thing. And Zach, he let me do it three or four times, and then he said, “I want the audience to think you’re a threat.”

And then in the other scenes, I wanted to play him like a hero, to sell the contrast of what everyone thinks the first time. I kind of put in my head that Georgina’s character reminds me of someone, like a daughter I might have run away from. It was kind of like if I could just save her a little bit, it would do me some good.

Were there any specific inspirations you pulled from to bring Andre to life?

Only personal experience actually. I was 13 years Army Special Forces before I became a stunt guy, and through stunts, I got into acting. So I took a different route from most people. And what I did with Andre, because I know a lot of my fellow vets, a lot of them, man, they just haven’t been able to get back. I had one friend in particular who actually lived on the street, and I kind of took a bit of his persona, the way he walked and stuff, and rolled it into the Andre character. But now he has a beautiful wife, a nice family, and a regular job, and he’s doing fine.

What was it like the first time you saw Matthew Patrick Davis in costume as The Mother?

So we were at this wonderful five-star hotel, and I was eating breakfast in the morning because I’m a breakfast guy, and this tall, skinny, very good-looking, very passive guy came up and asked if he could eat breakfast with me, and I said, “Sure!” And he said, “I’m also playing in this movie,” and I said, “Great” … look, I had no idea! No lie!

And he had to leave before I did, so I’m thinking, “I wonder what role this guy’s playing,” I’m thinking it could be Bill’s role or whatever. So I get to set, get dressed, and go to the location, and they had us in a van, and they bring this guy out… the Mother. And I thought, “God… who the hell is this?” And it was the funniest thing because I couldn’t believe how fantastic he looked!

I hated that scene, man! They kinda kept me in the dark about it, to be honest with you. And I thought the guy was just gonna break my neck, or do some kinda quick thing because of how strong she is, y’know? And it was like a couple days before, and [Zach] said, “We need you to go to the prosthetics guy.” And you know these makeup and effects guys, they’re kinda like freaks anyway. So they put this kinda harness on me, almost like a holster. And he was looking at my arm and measuring stuff, and then they finally tell me, “He’s going to rip your arm off.” And I was thinking it was going to look so fake.

But the way they did it, they had a pump to get the blood through the arm with all the nerves hanging out, and it wasn’t easy to rip off because it had a special hook that would initiate the blood-squirting and everything. And normally he’d just rip the arm off and I’d shake there, but literally on the set, Zach goes, “We should have him beat you with the arm.” Oh, man. Oh no. I’m glad it worked out though.

Is there anything you want audiences to take away from Andre?

That even though he was down on his luck, living on the street, he still took the time to save this woman. With everything going on in the world, and especially in the good ol’ U.S. of A., there’s so much friction going on that I will never understand. People are just people. Nobody purposely chooses to live on the street. Something happened in their life, and whatever it be, if it’s alcohol, drugs, finances, or a breakdown, they’re dealing with their struggle the best way they can.

Is there anything you’re working on you want to plug?

I’m right now working on a film called The Black Knight. It’s not a horror film. It’s about a little girl in Berlin who lives in an abusive environment looking for a knight to come save her from the evil king, her stepfather. And I play, again, which I’m going wear this thing out, but I play a vet who meets her and she changes his life more than he actually changes hers. It’s a Christmas thing; it’s going to be a beautiful story.