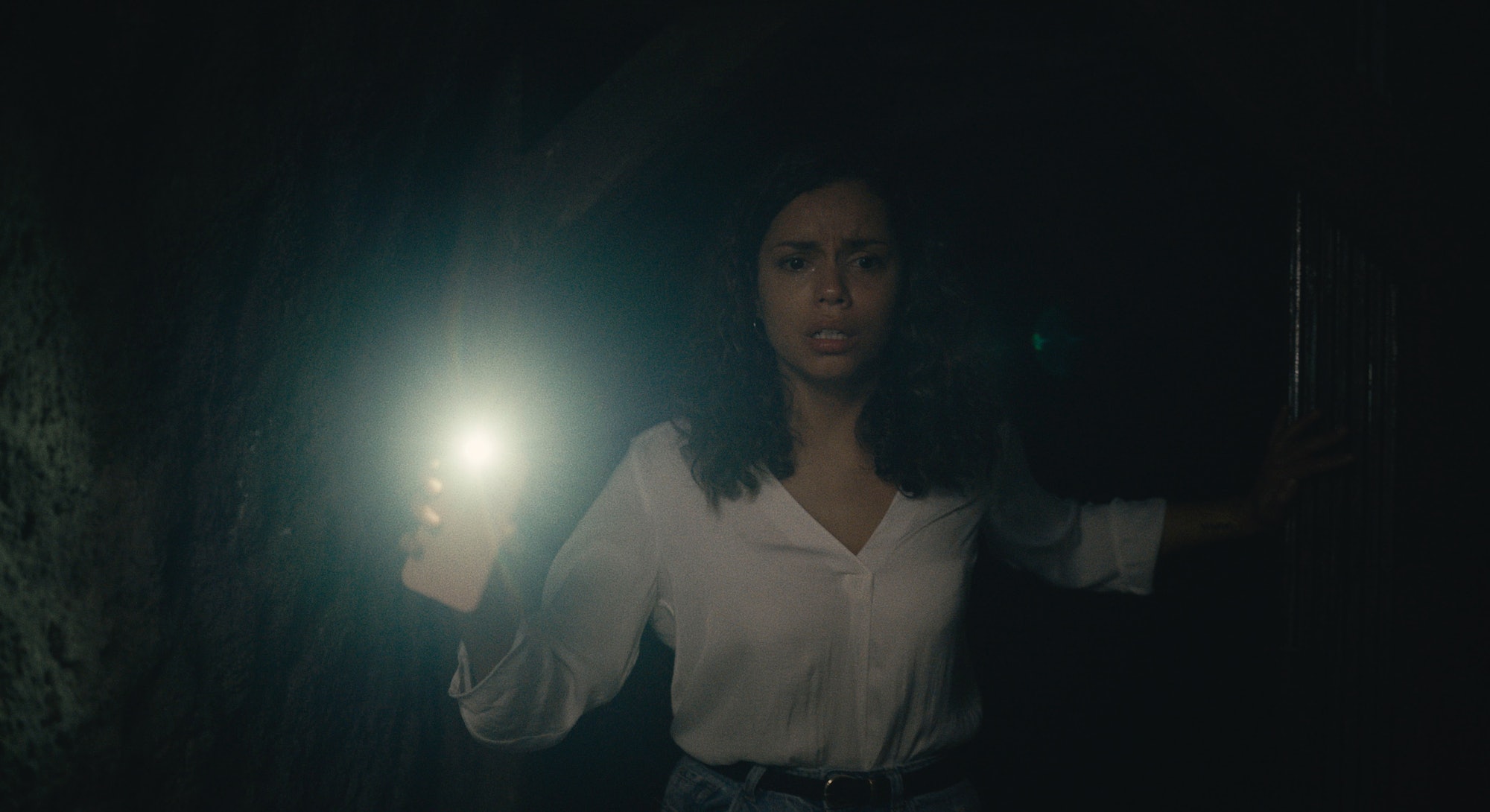 Minus the foreboding soundtrack, Barbarian’s intro has all the makings of a promising rom-com.

When Tess (Georgina Campbell) shows up at a vacation house already occupied by Keith (Bill Skarsgård), they discover they’ve been scammed and double-booked at the same place. Quite the gentlemen, Keith makes a big show of taking the couch and giving Tess the bedroom to crash for the night.

This is not the kind of scary movie where you shake your head and curse the characters for making obviously dumb moves that lead to their demise. This type of horror hits hard because maybe, just maybe, you’d do the exact same thing if you were in their shoes.

Tess, for example, always prioritizes safety. When she accepts Keith’s invitation to come inside, she knows she’s better off there than on the streets of the rundown Detroit neighborhood they’re staying in. (The hotels are all booked up, apparently because of a convention.) She demonstrates a variety of whip-smart behavior, from snapping a photo of Keith’s driver’s license to refusing the tea he offers her because she didn’t see him make it.

But once the wine starts flowing (she watches him unscrew the bottle’s cork), Tess’ reservations fade. They chat and discover how much they have in common. She’s in town for a job interview, and she talks about how men and women move differently through the world. If their roles were reversed, she says, he would have arrogantly barged into 476 Barbary. Remember this conversation because it makes the rest of the film more meaningful as the plot unravels.

Here, you might expect director Zach Cregger’s Barbarian to go the expected love-interest-turned-murderer route, à la Hulu’s recent Fresh. But that would be too predictable. The duo’s night ends with them struggling to get a freshly washed duvet cover on — gentleman Keith throws in a load of laundry when Tess insists she has “a thing about clean sheets” — and their morning begins with a sweet be-back-soon note he leaves on the coffee table next to the couch he slept on. Again, if it wasn’t for the eerie music, this is the kind of thing hopeless romantics would swoon over.

Tess heads off to her job interview and, when she returns, a trip to the basement to grab some extra toilet paper reveals a hidden door covering an abyss that Tess is wise enough not to explore — at least at first. (Her exact words upon making this discovery: “Nope!”)

I won’t spoil the details but, rest assured, what lurks in that black hole is not something you’re expecting given the movie’s setup. It’s a force equal parts evil and misunderstood —the best kind of mystery for a horror movie, in my opinion — and it comes for both Tess and Keith. Let’s just say, if you felt drawn to the ghastly black-haired girl who crawled out of TV screens in The Ring, you’ll spot some parallels here. It makes sense, given the producing team behind Barbarian includes alumni of It, The Grudge, and, yes, The Ring.

Now onto the delight and comedic relief: Justin Long’s AJ — a pompous, self-indulgent, hedonistic tool of a human who’s cruising down a beachside highway while our lovebirds battle what’s creeping below 476 Barbary. AJ owns this house, but as a high-profile celebrity with bigger and better things to do than maintain a small-town rental home, it’s been a minute since he checked out what was cooking beneath its foundation. He’s forced to come face-to-face with his actions when #MeToo allegations get him fired, forcing him to visit and prepare to sell the property.

The juxtaposition of Justin against Tess is stark and, at times, laughable. When Tess first sees a secret room with a stained mattress, camera, bucket, and bloody handprint, she’s filled with fear and terror. Justin, meanwhile, pulls out his tape measure to see if the dungeon’s square footage increases the house’s value. He’s a perfect example of what Tess described to Keith when they first meet about how women and men approach situations differently. This added thematic layer gives Barbarian depth that goes beyond gore.

In fact, if you’re in this for shock value alone, you might be disappointed. Cregger leans on jump cuts over jump scares. Just when you’re at the edge of your seat, the film will abruptly switch shots to a flashback or to another character’s storyline. These transitions work because each new scene adds juice to the history behind 476 Barbary. The house really does feel like a character all its own.

In the characters’ efforts to escape, they toe the line between selfishness and selflessness, adding another layer of thematic exploration to the plot. At one point, AJ asks himself if he’s a bad person or simply a person who has done bad things. That’s the real meat of Cregger’s new film, one teased in the film’s confidently simple title. It asks: Who’s the real barbarian here? And the movie answers.