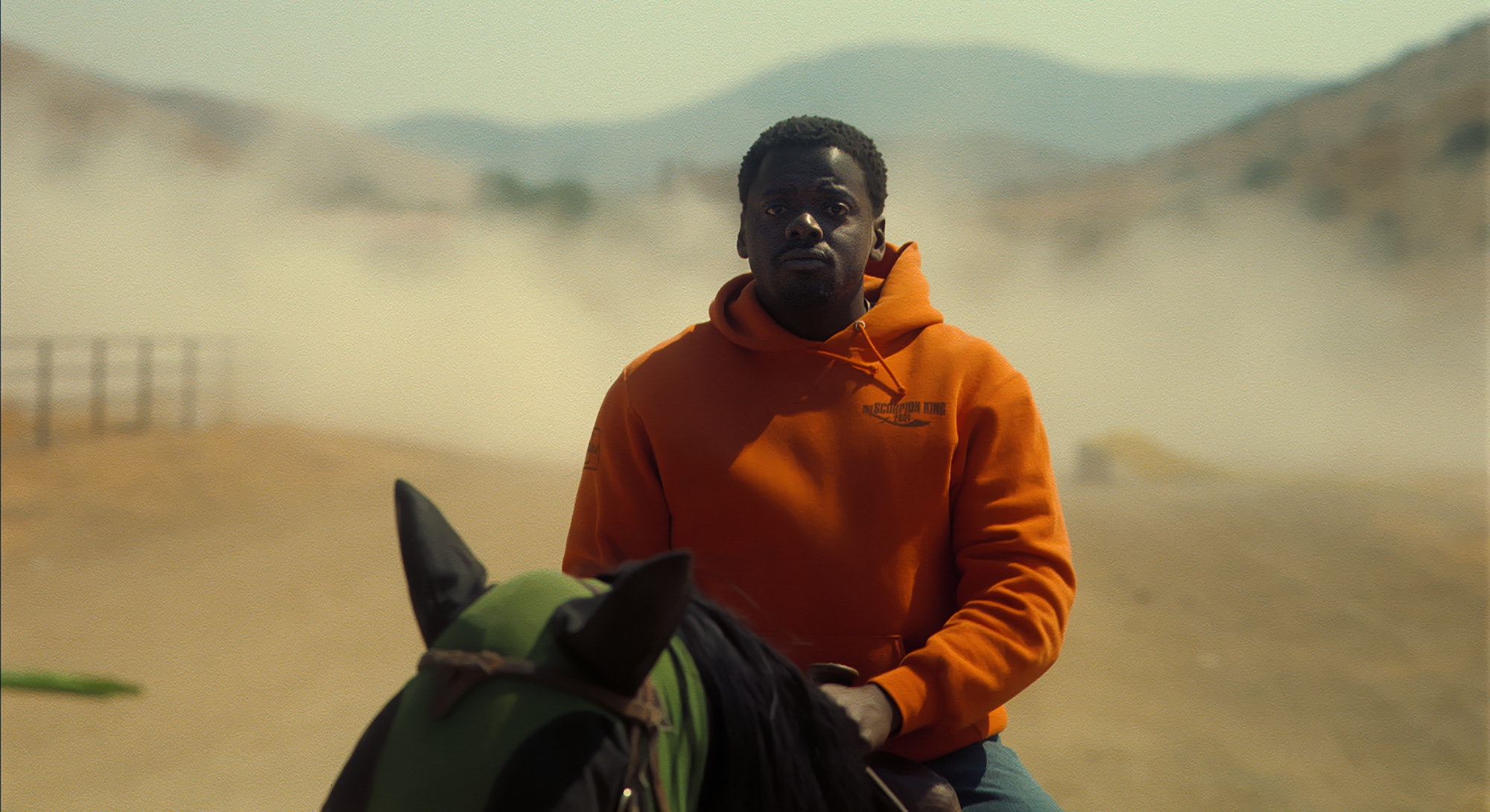 When asked about the meaning of the title Nope, writer-director Jordan Peele said it’s meant to indicate a direct relationship with the audience.

“The film is a ride,” he said at CinemaCon back in April. (His promise is genuine.) “The title speaks to the idea of the audience reacting to what they’re thinking and feeling in the theater.”

The characters in Nope similarly and cathartically behave in ways horror audiences (and specifically Black audiences) have long screamed at cinema’s victims for decades. You know the ones I’m talking about: Hormonal teenagers lost in the woods or haunted homeowners who won’t move out. When something evil threatens to swallow them whole, it’s the audience who shouts to leave the basement. The most powerful thing horror characters never do is look away and say, “Nope.”

Peele himself spoofed this years ago in Key & Peele, playing one of two hecklers calling out the director’s artistic choices. “This movie’s got an inconsistent visual language!” Peele loudly complains beside annoyed moviegoers.

Luckily, Peele won’t have hecklers. Unpacking the manipulative power of cinema is the crux of his latest, arguably greatest, and most polished work yet. Brimming with tension but laced with gaiety so as to never feel hostile, Nope is an operatic and sweeping thriller that celebrates cinema and simultaneously condemns it as an industry built on obscured violence. In musing Hollywood’s paradoxical business of creating fantasies by killing dreams, Peele along the way places overdue focus on the offscreen heroes who make the motion pictures possible. Even without all that, Nope is a stunning new entry in the midnight movie canon.

Three years after his doppelgänger thriller Us and five years after his paradigm-shifting Get Out, Peele expands his field of vision (and his aspect ratio to IMAX, which Peele takes absolute advantage of) for a monster movie with a surprise heist flavor.

In a remote part of the California desert resides the family-run, Black-owned Haywood’s Hollywood Horses, a farm that trains horses for productions that need them. After their father’s bizarre death, the soft-spoken and shy OJ (Daniel Kaluuya) butts heads with his charismatic, commandeering sister Emerald (Keke Palmer). While trying to procure the business of nearby theme park manager Jupiter (Steven Yeun), a former child sitcom star and survivor of a freak incident, their farm becomes a warzone against a horrific entity.

Essentially a horror movie about how hard it is to get the perfect shot, it’s irresistible to ponder how Peele’s ascendancy in Hollywood is metaphorically explored in Nope. (In one piece of stone-cold evidence, Peele reveals he pulls off the impossible shot: An homage to Akira, the Japanese classic Peele dropped out of remaking.)

After hits like Get Out and Us, Nope seems to find Peele thinking about the history of cinema — and his ability to influence it — in direct terms. Plenty of Nope pays visual homage to the unnamed Black jockey in Eadward Muybridge’s The Horse in Motion, the first moving photograph and a precursor to all of cinema. (Remember that Westerns were basically the first Marvel movies, in part because the sprawling California provided ample sunlight, which the earliest cameras needed to capture images at all.)

"Did you know the very first assembly of photographs to create a motion picture was a two-second clip of a Black man on a horse?" proudly declares Palmer’s Emerald on a commercial set, where she jokes they’ve always had “skin in the game.” Later in the film, Kaluuya — whose otherwise stone-faced performance is as much a choice as it is an occasional hindrance to the movie’s momentum — heroically rides a steed to thrilling fanfare. It feels like righteous reclamation of deprived dreams.

Peele is also visibly concerned with the bloodshed of cinema. One character, a cameraman played by Michael Wincott whose signature raspy voice steals the show, provides cheeky romanticizing that equates film “shooters” to rogue gunslingers. But another, meatier plot thread brings audiences to one fateful day on the set of a 1998 sitcom. It’s here where Peele most potently demonstrates his sharpened skills as a horror visualist. Stare a killer chimpanzee in the eye, and you will utter the film’s title.

Ask any director, be it a college film student or Peele himself, and they will talk at length about the struggle of getting that one perfect shot. It can become an obsession that’s both destructive and alienating enough to feel like you’ve been sucked into the vacuum of space. When it’s all done, what is actually left behind but more things to pick up?

Nope will no doubt have detractors, and maybe even hecklers who complain about yet more slowed-down pop music and unexplained lore of the entity gobbling up everyone. But who cares? Even if Nope is meant to communicate to its audience, it never lets them do more than ride along. Far removed from his TV sketch comedy days, Nope proves Peele is now armed with artistic confidence and assuredness earned only through consistency. Is it the scariest movie you’ll ever see? Nope. Is it unforgettable? Yup.

Nope opens in theaters on July 22.