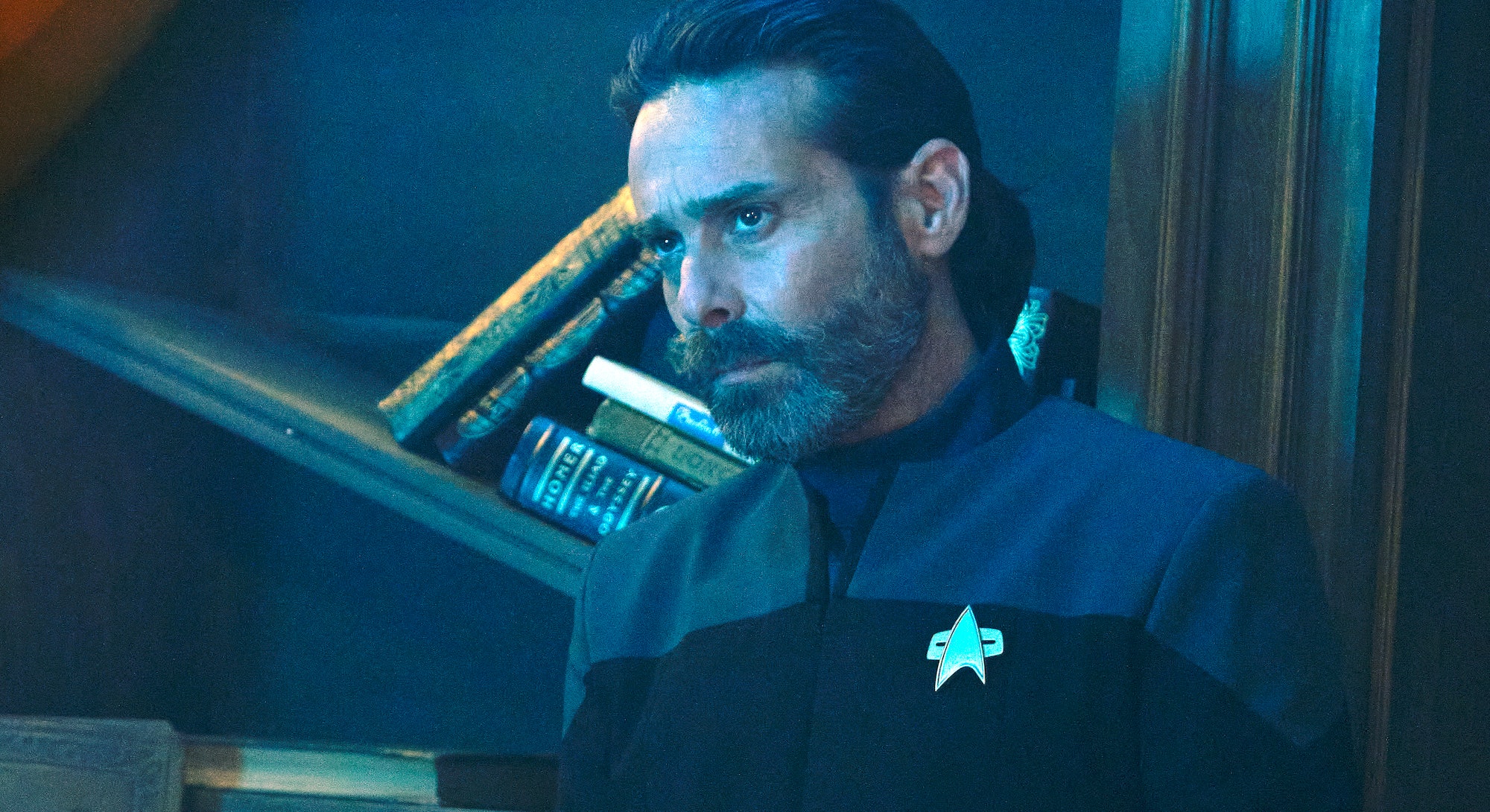 The Cylons have invaded Star Trek.

Well, not quite. But in Episode 7 of Star Trek: Picard Season 2, former Cylon collaborator Gaius Baltar from Battlestar Galactica, the time-traveling “Witness” Athan Cole from 12 Monkeys, or — as we know him on our planet — actor James Callis appears in the form of Jean-Luc Picard’s therapist. But is he really Picard’s therapist?

Inverse caught up with this sci-fi legend to figure out how he gate-crashed the Final Frontier and what comes next. Spoilers ahead.

The biggest revelation in the Picard episode, “Monsters,” is that James Callis isn’t just playing some faux-Starfleet therapist living in the recesses of Jean-Luc’s mind. He’s also playing Maurice Picard, Jean-Luc’s father, in flashback. However, because most of this episode happens inside of Jean-Luc’s head, Callis clarifies that his character isn’t so clear-cut.

“It’s not strictly speaking his dad, is it?” Callis tells Inverse. “Because this is going on inside somebody's mind, it’s a tough psychological nut to crack.”

“It’s a question of dialing up the frequency and turning it all up.”

Callis also tells Inverse that when the casting call came through, he was unaware of the true nature of the role. Because Callis worked with Picard showrunner Terry Matalas on 12 Monkeys, one might assume that the part was made for him. But Callis confirms that’s not the case.

“I can't say that it was planned,” Callis says. “Nobody quite knew what they were looking for, which, in a sense, is much like the casting of Gaius Baltar. This is maybe one of those things, too.”

For four seasons, Callis played Baltar on Battlestar Galactica, a character famous for his duplicitous and selfish nature but also for his surprising and complex turns. Picard Season 2 later reveals the “therapist” character to be Jean-Luc’s father, who may not have been the tyrant the younger Picard perceived him to be.

This isn’t to say Baltar or Maurice Picard are good guys, but James Callis has made an art form out of sci-fi characters who seem to project outer darkness while harboring an inner light. By the end of Battlestar, Baltar’s basic tendencies changed. In 12 Monkeys, we think Athan Cole is destined to be a wicked villain but becomes a hero. So, what makes Callis so good at this type of complex sci-fi character?

“The reason for me doing each specific job was actually terribly different in my mind. Playing somebody who is conflicted in some fashion, whatever the conflict is, well, we’re all vibrating the whole time,” Callis says. “So, I think it’s a question of dialing up the frequency and turning it all up.”

Callis also isn’t sure that all of his sci-fi characters are as similar as they might seem and is quick to point out that his 12 Monkeys character was very much a good guy. “I loved being able to do that,” he says. “I loved that Athan was the hero. That was so awesome.”

Before Callis’ appearance in Picard, we’d only seen Jean-Luc’s father Maurice in one TNG episode, called “Tapestry,” in which actor Clive Church remonstrates Jean-Luc in an illusion created by Q. But Callis’ approach to the character in Picard wasn’t about trying to bend over backward into the Trek canon. Nor did he overthink about how he and Stewart worked with Ronald D. Moore on BSG and TNG, respectively.

“It was such a gift to work with Sir Patrick Stewart. There is no one word or thing to describe it,” Callis says. “But because it was, as it were his brig, I didn't start a conversation where I said, ‘So Patrick, there was this one time on Battlestar...’ It was not what we were doing.”

If it weren’t for the Battlestar reboot, it’s hard to believe there would have been an explosion of sci-fi TV post-2009. Back in 2017, one of Callis’ BSG co-stars, Rekha Sharma, appeared in Season 1 of Star Trek: Discovery, which at the time gave off major Battlestar vibes. Does the current ongoing renaissance of sci-fi TV have Battlestar to thank? And what is its relationship with Star Trek besides sharing a talent pool?

“Battlestar was a one-off,” Callis says. “It’s possible to take elements from it and recreate it, but it was one-of-a-kind. Growing up watching the [original] Star Trek, the guys on the Enterprise were the good guys. When I was on the Galactica, I was not necessarily one of the good guys. There’s a moral gray area there.

He adds, “But in [Star Trek], it seems like that universe is evidently much more advanced. If we’re going to get to space and all wear uniforms and chat in other languages, we’re gonna have to get on with each other.”

Now that Callis is part of the aspirational Star Trek canon and somewhat permanently a part of the Picard family tree, could he return to Trek again as Maurice or another Picard ancestor?

“Never say never,” Callis says earnestly. After a beat, with a sardonic tone worthy of Gaius Baltar, he adds, “Well, obviously, I pitched CBS with my idea for a spinoff, Mo Picard. I’m still waiting to hear back on that.”