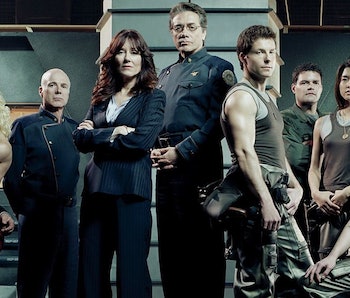 Frak yes. The greatest science fiction TV series of the 21st century is easily Battlestar Galactica. The 2003-2009 series put the space boots in reboot, and proved you can entirely transform a fairly decent 1978 sci-fi show into something amazing. Primarily helmed by Ronald D. Moore (Star Trek: TNG and DS9) and David Eick (Xena and Hercules) BSG defined science fiction binge-watch culture, even before we had streaming.

The immortal Portlandia sketch in which Fred and Carrie ruin their lives by desperately waiting for the next Netflix DVD of Battlestar episodes is only dated because of the physical DVDs. To this day, Battlestar remains the most addictive contemporary sci-fi TV show in existence. But, suppose you've never seen the show? Should you actually binge the entire thing from the beginning? Maybe not. Here's a warning and a guide for the Battlestar-curious. Maybe don't watch the whole show?

Here's a hack for only getting the best of BSG. Minor spoilers ahead.

Where should you start watching Battlestar Galactica?

There are two answers. A purist would tell you to start with "The Miniseries," which was the three-hour event that launched the show. When you hit up Peacock (where Battlestar is streaming for free) you'll find that Battlestar Galactica: The Miniseries is streaming separately from the main series. This is mostly a formality, and yet...if you're only trying to watch the best of Battlestar, you can skip the miniseries. All of it.

For hardcore BSG people, what I'm saying is sacrilege to the Lords of Kobol. The thing is, you actually get everything you need to know about The Miniseries when you just start watching the actual show.

TLDR: The Cylons are robots, they also have the ability to look like humans, there are only 12 different human "models," the Cylons have destroyed all human planets in this part of the galaxy, and the survivors are fleeing in space in a fleet led by a giant space warship called Galactica.

This isn't a spoiler. You get all of this in the intros to BSG, and if you start with Season 1, Episode 1, "33," your viewing experience will be better. If you're a huge fan, by all means, go back and watch The Miniseries. But if you're trying to get into the show to see why people love it, start with "33."

Should you watch all four seasons of Battlestar Galactica?

The short answer to this question is no. If you want to love BSG and keep that love in your heart forever, there's a very real chance you might not want to watch the entire series. Especially Season 4.

Basically, the show is borderline perfect in Season 1. That's only 13 episodes. The cliffhanger at the end of Season 1 ("Kobols' Last Gleaming Part 2") is fantastic, so you'll want to start watching Season 2 right away. Which you should totally do.

Battlestar Galactica Season 2, is arguably, even better than Season 1, and by the time you get to the mid-season episode "The Pegasus," you'll see why. From that point, the show gets better and better, and each mystery deepens in a way you don't see coming. The outer-space action in Season 2 is also bonkers good, and you'll find yourself wishing that certain episodes and been theatrical movies. Season 2 also ends on yet another excellent cliffhanger, which leads you into Season 3, and that's when things get tricky.

Seasons 3 and 4 of BSG are a mixed bag

Okay. There's no easy way to say this, so I'm gonna say it outright. If you want to only get the best of Battlestar stop watching after Season 3, Episode 4, "Exodus Part 2." All the huge upheavals at the end of Season 2 are pretty much resolved by the end of "Exodus Part 2," but if you're really curious about what went on during the "missing year," (minor spoilers) then go ahead and watch Season 3, Episode 9, "Unfinished Business," which, for some people, is their favorite episode.

But. After that. You have a choice to make. You can keep going into the rest of Season 3, or you can start skipping around. If you're determined to finish the show after "Unfinished Business," in the middle of Season 3, here's what I suggest you do, skip straight to Episode 13 "Maelstorm," of Season 3, and then just jump to Season 3 finale, "Crossroads Part 2." That episode concludes Season 3 with a huge, huge twist, which is set-up by the events of "Maelstorm."

Now, Peacock has the stand-alone movie Razor at the very end of Season 3. Chronically, Razor happens in three timelines: before the show ever started, before SEason 2, and during the start of Season 3. It was released in-between the gap between Season 3 and Season 4, so it's got some cool stuff in it. Can you skip it altogether?

Okay, you've done the bare minimum of Season 3. Now comes the biggest challenge of all — Season 4! After the huge huge huge twist at the end of "Crossroads Part 2," you should, yes, watch the Season 4 opener, "He That Believeth in Me." But you know what? After that, skip the rest of the entire season up until one very pivotal and expository episode; Episode 15, "No Exit," and then, skip to the three-part series finale "Daybreak, Parts 1, 2, and 3."

That's it. Really. If you want to do Season 4, just watch the first episode, "No Exit," and then the three-part series finale. You'll get the gist, and you'll not have to wade through as much stuff that is not so great. To be clear, Season 4 of BSG is still better than most sci-fi TV shows. However, compared with the pacing and brilliance of Seasons 1 and Seasons 2, it's a frustrating season in which the characters seem to be treading water most of the time. There's even a bizarre mid-season finale in which the fleet seems to be at the end of their journey, but really, it's not. This is episode 10, "Revelations," is one that some fans have suggested you watch as the final episode, but I do think there's something worthy about the real finale, even if some of the choices are a little wonky.

Infamously, Season 4 of Battlestar Galactica was held up by the 2007–08 Writers Guild of America strike. One could argue that had that strike not happened that Season 4 might have turned out differently. But, even before the strikes happened, Moore and Eick had already decided that Season 4 would be the final season of the show.

Once you've finished BSG — even with this skipping around hack order — you may wonder if it's worth watching the other standalone movie, Battlestar Galactica: The Plan. But you shouldn't. Throughout the show, you're told that the Cylons have a plan, but in the end, you're better off not knowing what it was. Trust me.

Battlestar Galactica is streaming on Peacock.