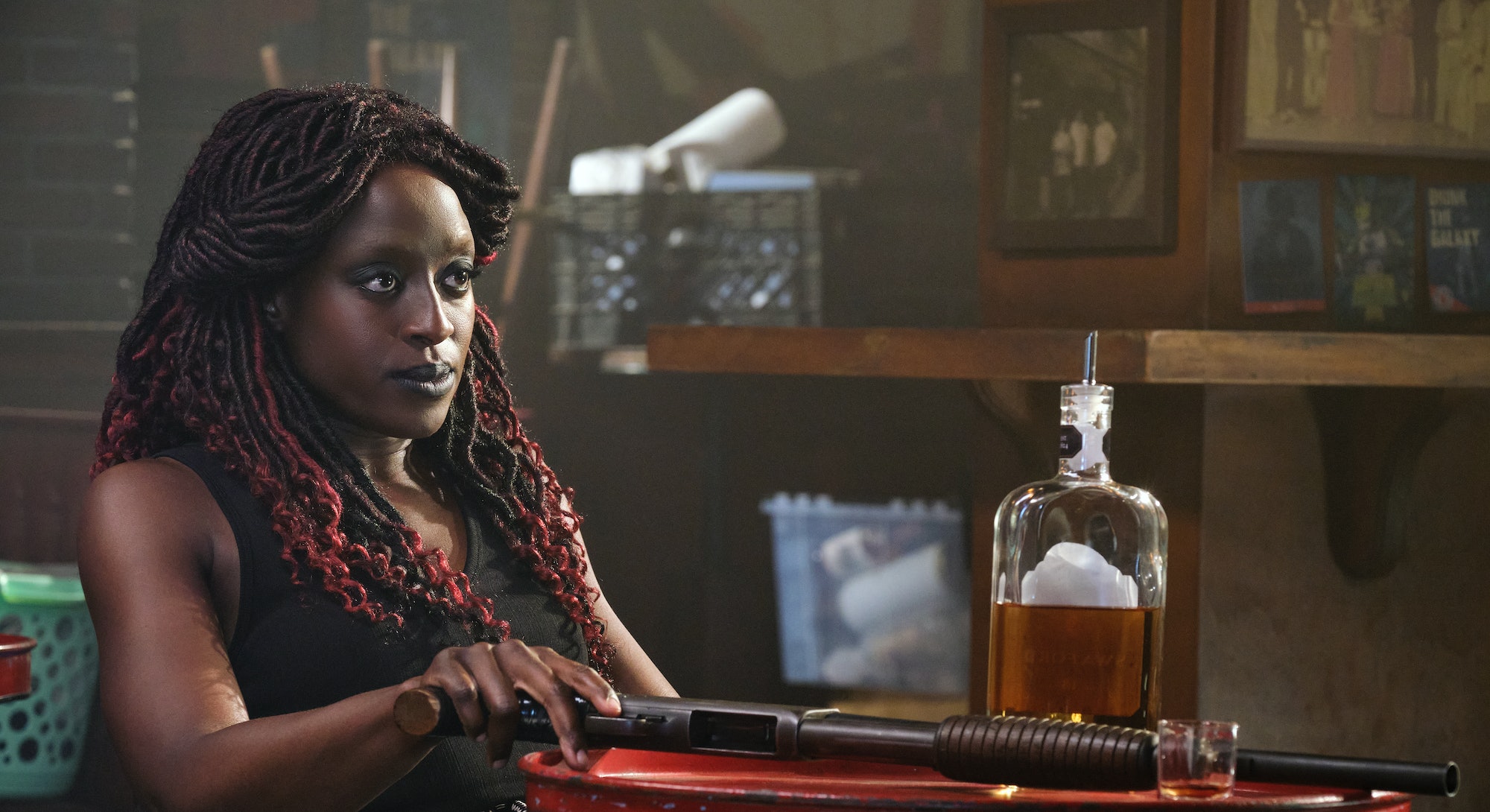 But in the script, when Jean-Luc walks into her Los Angeles bar, Ten Forward, in 2024, she has no idea who he is. Playing the role of Guinan, she’s suspicious he knows that she’s really an alien, and so, she pulls a gun on him. But, as a childhood fan of The Next Generation, Aghayere was nervous about holding up Jean-Luc Picard.

Ahead of the debut of Picard Episode 4, Inverse caught up with Aghayere to discuss her fresh take on the younger Guinan, her love of The Next Generation, and why this character is so different than the one we’ve known before. Spoilers ahead.

For those who remember Guinan and Picard’s cozy relationship in The Next Generation, Aghayere’s version of the famous Enterprise bartender is a shocking, refreshingly grounded new take on the character.

“She’s 400 years younger than Whoopi's Guinan,” Aghayere explains. “She shoots from the hip, literally. It was a really fun experiment for me as an actor to strip away all the parts from the Guinan that I knew and loved.”

Aghayere adds, “[Whoopi Goldberg] was my guiding light in figuring out the math of how I subtract all of the things that she knows and all of the things that let her be able to be so generous toward the people in her community and the Enterprise. What does that look like to be in the inception stages of that person who you will become?”

Thanks to the topsy-turvy changes, Guinan hasn’t met Picard yet in this time, not even through old-school time travel. And so, what was once a place of comfort for two characters — as evidenced by Whoopi Goldberg’s return in the Season 2 debut — is now a source of conflict.

In one moment in the episode, Aghayere’s Guinan reminds Picard that “people that look like you” experience the world differently. This particular reminder of how racism is (mostly) gone in Picard’s era but still all too common in the 21st century is something The Next Generation would probably never directly address. And part of Aghayere’s goals in crafting the new Guinan was to make sure that her surroundings were an authentic depiction of what it would be like for a Black woman to own a bar in Los Angeles in what is, roughly, present day.

“There was one iteration of the bar that perhaps didn't, at the time, have the elements that would make it look like it was owned by Black woman,” Aghayere says.

“She’s not taking any of this lightly.”

She wanted to make sure the bar represented a “kaleidoscopic vision” of the character, complete with representations of Jazz icons like Ella Fitzgerald and Sarah Vaughan, who Aghayere says in her “wheelhouse.” After collaborating with director Lea Thompson and production designer Dave Blass — before they built the set — Aghayere says she was able to imbue the 2024 Ten Foward with something that felt “actually mine.” When Aghayere first walked into the bar, she was at home.

“I actually cried,” Aghayere says of her first time walking into the bar, which later functioned as an actual pop-up bar in Los Angeles this past month. “It's such a gift when you can walk into a space, and you don't have to do any work — especially as a person of color — to try to insert yourself into that room. Everything had been thought of, even down to the Polaroids on the wall. They actually let me sneak a Polaroid of my husband in there!”

In the context of this episode of Picard, however, Guinan is on her way out. She’s packing up and giving up on humanity, which strikes her as racist and hopeless.

“Change is too damn slow,” Guinan tells Picard in the episode. For Aghayere, she thinks this feeling of angst and frustration is universal, especially in our real lives in 2022.

In fact, when Aghayere first auditioned for the role, there was no indication that she was playing Guinan in a new version of Star Trek. All she knew was that her character was “Gwen” and was being bothered by a man named “John.” Still, in those pages, she was able to channel her own “emotional truth” to the role.

“Even before I knew it was Star Trek, [the writing] gave me a touchstone into emotions and experiences that I had, and I think a lot of people can relate to,” Aghayere says. “Because it's not just unique to me as a Black woman, it's universal. Angst and hopelessness are things that many people in many demographics have felt in various ways over the last few years. So that’s what I brought to it.”

Guinan agrees to help Picard by the episode's end, but she doesn’t stick around to hold his hand as the other Guinan would have. This version of the character is taking care of herself first.

“She is not trusting. She has been hurt,” Aghayere says. “She’s not taking any of this lightly.”

So, what’s next for Guinan? Will she reappear before the end of Picard Season 2? Just like the original Guinan, Aghayere can keep a secret or two. Beyond this appearance in Episode 4, she can’t and won’t reveal a thing.

“All I can say is that it all remains to be seen.”