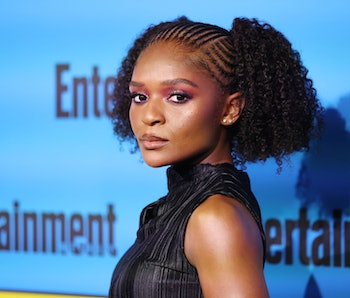 Riri Williams is waiting in the wings of the Marvel Cinematic Universe. After reports that Black Panther: Wakanda Forever would be filming on location at MIT, fans have speculated that the successor to Tony Stark would be introduced sooner than her upcoming spinoff series, Ironheart. Sure enough, we see her working on her Ironheart suit in the Wakanda Forever trailer.

Now that Ironheart is officially filming, we’ve also got our first glimpse of Williams’ suit and foes, which includes both a surprising new face and a very familiar one.

Leaked set photos procured by JustJared show Riri in a rudimentary version of her Ironheart suit, a bulky mechanical getup that seems akin to early Iron Man rather than the sleek Ironheart we see at her peak in the comics. This is clearly a preliminary model, so it looks like Riri’s origin story won’t be limited to her appearance in Black Panther: Wakanda Forever.

Much like Marvel’s youth-oriented Ms. Marvel series and Spider-Man trilogy, it looks like Ironheart will be a coming-of-age story as much as it’s a superhero story.

Anthony Ramos as The Hood

Other set pics show Hamilton and In the Heights star Anthony Ramos in an eerily accurate version of The Hood’s comics costume. Much like Dr. Strange, The Hood encounters a mystical cloak that grants him powers, but he’s never afraid of getting his hands dirty and picking up a pistol if that’s what the situation requires.

Ramos is usually cast as protagonists and golden boys, so seeing him take on a villainous role, especially a gritty character like The Hood, will be quite a departure for him. It will definitely, however, be a fresh approach for a MCU villain.

The Return of Agatha Harkness

Brazilian fan account Feiticeira Escarlate Brasil (That’s “Scarlet Witch Brazil” in Portuguese) reported a leak claiming that The Hood won’t be acting alone. Instead, none other than Wandavision’s resident nosy neighbor and meddling witch Agatha Harkness will serve as his mystical advisor. This not only means more Kathryn Hahn on our screens, but it also has big implications for Agatha’s upcoming spinoff, Agatha: Coven of Chaos.

When we last left Agatha, she was trapped in Westview by Wanda Maximoff. How does she escape her suburban prison to act as The Hood’s mentor? Maybe she’ll just show up, and then we’ll find out how she busted out in her own spinoff. With Ironheart not scheduled to debut until late 2023, we may have to settle in for a long wait.