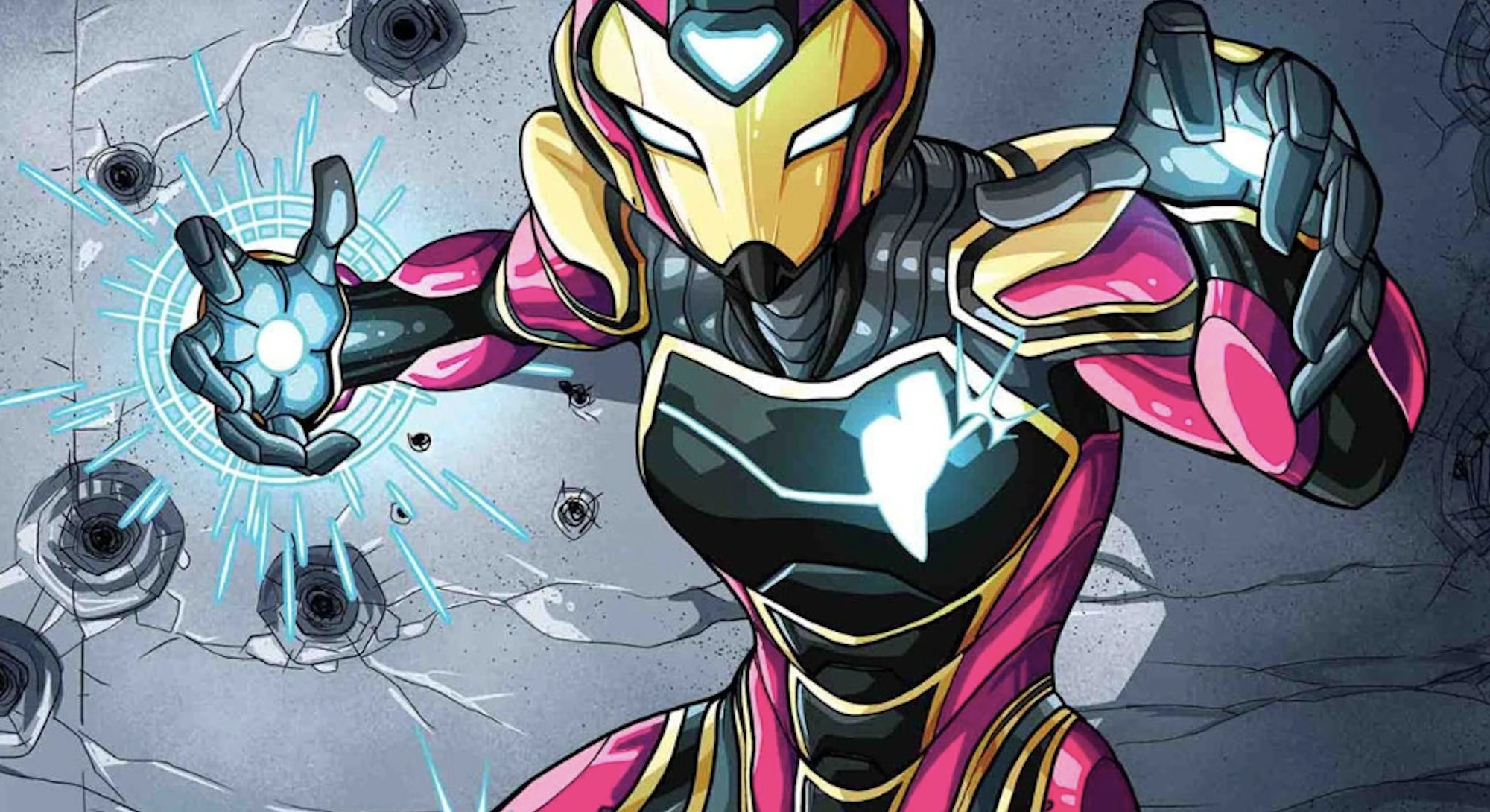 The legacy of the Marvel Cinematic Universe’s debut hero will be re-forged.

When Riri Williams makes her MCU debut in November’s Black Panther: Wakanda Forever she’ll don a suit of armor that will immediately place her in conversation with Iron Man and all the expectations that come with filling those big metal shoes.

The character, portrayed by Dominique Thorne, is already set to lead the Ryan Coogler-produced Ironheart series on Disney+ next year and is rumored to play a role in Armor Wars. In other words, Riri will play a significant role in the MCU going forward as the franchise continues to establish its next generation of heroes and deal with the legacy of the original Avengers.

But unlike her comic book counterpart, Riri will emerge as a hero without the official endorsement of Tony Stark, freeing her from his baggage but also offering its own challenges as she makes her way in the MCU.

Riri Williams made her first full appearance in Invincible Iron Man #9 (2016) by Brian Michael Bendis and Mike Deodato. A 15-year-old genius and MIT student from Chicago dealing with the gang-related loss of her step-father and best friend, Riri builds a suit similar to Stark Tech using materials “borrowed” from campus labs. With this prototype, she manages to stop a prison break, which not only draws the attention of MIT and the police but also Tony Stark.

Stark admires Riri’s talents and decides to support her — much to her mother’s skepticism.

It isn’t until the aftermath of CivilWar II (2016) in which Carol Danvers beats Tony Stark into a coma (yeah, it’s not a beloved story), that Riri emerges as Ironheart (though many mistake her for Iron Man at first). In the relaunch of Invincible Iron Man by Bendis and Stefano Caselli, Riri becomes Earth’s primary hero in a way not dissimilar to Rhodey’s own tenure as Iron Man during the ‘80s. Despite efforts to make Riri more than a Black substitute for Tony Stark, the billionaire-playboy-philanthropist’s digital shadow loomed large.

In Invincible Iron Man, Riri develops a streamlined suit of armor, boasting the same red and yellow colors associated with Iron Man. Instead of having Friday or Jarvis as her onboard A.I. operating system, Riri is aided in her mission by an A.I. in the form of Tony Stark’s consciousness, which he uploaded before his physical self was rendered comatose.

Even as Riri establishes herself as Ironheart, earning the respect of the superhero community, and Tony’s ex, Pepper Potts, she cannot entirely separate herself from Iron Man. Tony is literally in her suit, making him a part of her.

As fun as their dynamic and bickering may be, it’s difficult not to see the inherent problems of a Black woman having to contend with the supervision of a white man. Despite her own genius, she has to constantly worry about the perception of Stark (a former arms dealer) and his peers as she builds her legacy off of his.

When Tony Stark physically recovers, Riri develops a new A.I., based on her deceased best friend Nathalie Washington. She also builds a new suit of armor and becomes a member of the teenage superhero team, The Champions.

In her own self-titled series Ironheart (2018) — by Eve L. Ewing and artists Kevin Libranda and Luciano Vecchio — Riri becomes more independent and develops her own roster of villains (until then she was mostly fighting Iron Man’s leftovers). But even then, she still required Tony’s assistance, such as getting her into Wakanda to get aid in fighting the Ten Rings.

In Black Panther: Wakanda Forever, written by Coogler and Joe Robert Cole, Riri will come into her own in a world in which Tony Stark is not simply missing or comatose, but definitively dead. While it’s unknown at this point what additional changes will be made to Riri’s origin, it’s clear the friendship between Riri and Shuri established during Ewing’s run will play into Wakanda Forever with the trailer briefly showing the familiarity between the two geniuses.

Rumor has it Riri will be studying in Wakanda as part of the immersion efforts announced at the end of Black Panther (2018). This feels like a more natural way to situate Riri in Wakanda rather than having to rely on Tony Stark for an introduction. It also gives her a technological resource in Vibranium that Stark didn’t have, allowing her inventions to feel unique to her character.

On one hand, there will be an immediate sense of recognition and interest in this new character, given her armored connection to the MCU’s most beloved hero. On the other hand, a young Black woman emerging as the successor to the “Iron” legacy is obviously going to create some racially focused backlash, unfortunately.

But there’s a really interesting opportunity here to have a character who doesn’t need Stark’s endorsement. One who doesn’t feel like she owes him or has to follow his advice. Yes, Iron Man was a great hero, but he was also a former arms dealer prone to selfish behaviors and crusades that went far above the streets of Chicago.

With Ironheart facing off against The Hood (Anthony Ramos) in her Disney+ series, the character has a chance to explore the battle between technology and magic that RDJ’s Iron Man never did. As a result, Ironheart has a different mission, something other than putting a suit of armor around the world.

While it will be impossible to entirely separate the character from Iron Man, the MCU iteration has all the makings of a character who can make her own legacy rather than continuing the legacy of someone else. That speaks volumes for a character whose youth, Blackness, and womanhood are all integral to her heroism.

Thanks for reading and, as always, keep your mind in The Gutter!