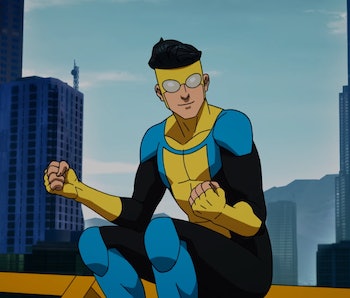 This article about Season 1 of the series Invincible was originally published on February 1, 2019 and updated on January 22, 2022 following the release of the season on Amazon Prime. Read on for the original article, with some new changes to reflect the latest updates on this topic.

Look, up in the sky! It's not Superman. Amazon, the retail giant behind several superhero shows, including The Tick and The Boys, got into the superhero business (again) with Invincible, a new animated series from the creator of The Walking Dead, Robert Kirkman.

Here’s everything you need to know about the series, from the cast to release dates and how to read the comics now.

When was the release date for Invincible Season 1 on Amazon?

Invincible’s first season flew onto Amazon Prime on March 26, 2021. Much like The Boys Season 2, the first three episodes dropped all at once. The remaining five were released weekly.

What is the plot and story of Invincible?

In Invincible, based on the Image Comics series, an ordinary 17-year-old named Mark — whose father is the alien superhero Omni-Man — awakens to superpowers of his own and must learn to uphold his father’s legacy.

Invincible is an original superhero saga from Robert Kirkman (creator of The Walking Dead) and illustrators Cory Walker and Ryan Ottley.

Omni-Man was Earth’s greatest protector, a visitor from an alien race called the Viltrumites. But one day at his after-school gig, Omni-Man's son Mark awakens to superpowers of his own, including super strength, speed, flight, quick healing, and some invulnerability. The series ran for more than a decade, from 2003 until 2018, for 144 issues.

How did Amazon get involved with Invincible?

After several years in development as a live-action film by Seth Rogen and Evan Goldberg, Amazon scooped up the property to become an animated serial in the summer of 2018.

Where is the trailer for Invincible?

On October 8, 2020, to mark the first day of the (virtual) 2020 New York Comic Con, Amazon released the trailer of Invincible. You can watch it in the embed below.

Who is in the cast of Invincible?

Where can I read Invincible?

At 144 issues long, you could try to pick up each individual back issue at your local comic book shop or your neighborhood comic conventions. (And it’s always a good thing to support local businesses.) However, for an easier read, several collected editions exist both in print and online.

With each varying in size and number of issues, you can pick whichever one is right for you.

Has Invincible been renewed for Season 2?

Yes, and then some! On April 29, the same day as the Season 1 finale, Robert Kirkman and Steven Yuen announced on Twitter that Invincible was renewed for both Season 2 and Season 3. Mark your calendars for more Mark Grayson shenanigans in the years to come!