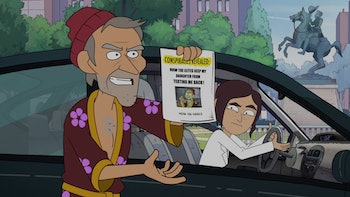 If the Deep State was real, what would it look like? And who would be the shadowy elites pulling the strings? Netflix's newest adult animated series Inside Job is here to answer those questions and a whole lot more.

Inside Job landed on Netflix on Friday, October 22, but there’s a decent chance you already binged through this addictive new animated series. If that’s the case, you may be looking for answers to some of Season 1’s biggest questions and what its ending really means. Lucky for you, we have the answers, courtesy of Inside Job showrunner Shion Takeuchi.

What is Inside Job on Netflix?

Created by first-time showrunner Shion Takeuchi (Gravity Falls, Disenchantment), Inside Job is a workplace comedy set at Cognito, Inc., a shadow government entity in charge of making and managing every global conspiracy imaginable. As you might expect, every day in this line of work is a chaotic adventure.

But for Takeuchi, there’s also something weirdly comforting about the

"That concept of an all-knowing, all-powerful group of people pulling the strings behind the scenes became oddly comforting as the world became more and more chaotic," Takeuchi tells Inverse. "Man, it sure would be nice if there was a shadow government. When I felt that change within myself, I was like, there's probably something interesting there."

If Rick and Morty, Archer, Men in Black, and Cabin in the Woods were thrown into a blender, Inside Job would be the bonkers conspiracy smoothie you'd be drinking up, one straw-suck at a time.

Warning! Spoilers ahead for Inside Job: Part 1.

Inside Job Part 1 of the series took its characters on a bumpy ride through near-world-ending calamities. There was the power-hungry robot President hell-bent on starting World War III, the cataclysmic misunderstanding with an elite group of lizard people known as Reptoids, and even a violent face-off with a group of armed Flat Earthers which somehow culminated in the death of billionaire Jeff Bezos, who was swallowed whole by a hungry Kaiju.

Honestly, it's all a part of the *cough* job. For Reagan, though, being at Cognito, Inc. is not just a measly 9-to-5 situation. It's her life's purpose. And through each episode, we watched as Rand's prodigy daughter settled into her new position as crew leader. She strived under pressure, professionally speaking. But when it came to certain social skills like hugging, or smiling, or paying compliments, her struggles became quite real.

The mere thought of touching another person, let alone taking them in for a warm embrace, sent Reagan into fight mode. And in Episode 3, "Blue Bloods," we see firsthand how she dealt with such intimacy by punching Brett in the face. But hugging is a skill she needed to master, for professional reasons, to maintain the peace agreement between the Reptoids and Earth. And if Cognito, Inc. was going to re-up their contract with the powerful reptilian race, Reagan was going to have to get used to this touching thing. Or, you know, bring a personality hologram and a set of attachable robot arms she can hug people with instead.

Of course, the arms malfunctioned, and Reagan was put on trial for the gruesome damage they caused (she ripped the Reptoid’s leader’s arms right from his body). When her father showed up with Bear-o, the giant robotic teddy bear he created to be her only friend as a child, things really started falling into place. Turns out, her father never showed her affection growing up. And the mechanical bear, armed with a knack of giving hefty, intrusive hugs, inflicted loads of trauma on young Reagan.

This is one of many examples of how Rand traumatized his daughter while pursuing his own interests. Rand, as we got to know him in each episode, fully stepped into his disgraced, washed-up, alcoholic retiree lane. But, he also had a chip on his shoulder. And Cognito, Inc., the shadow government entity he helped build, and its leader JR Scheimpough (Andrew Daly), was the target of all of his rage.

It became clear that he was pushed out of the company and — while his daughter was making headway in the company, by slowly making friends with her odd-ball coworkers and squashing a whole slew of potential extinction-level events — wanted to reclaim his rightful place in the top spot. Was he just all talk? Or was there truth to his rants?

In Episode 9, "Mole Hunt," after JR left his post as Cognito, Inc. CEO to join the otherworldly Shadow Board, the group that really pulled the company’s strings, Reagan was promoted to the top spot. This good news was short-lived, though, as the company suffered a security breach. A mole had stolen the "Unspoken File," a master dossier of every conspiracy theory the company had ever committed.

In her first act as the newly-seated CEO, Reagan was now in charge of finding the mole and securing the dossier, or she and everyone on her team would be sucked away to Shadow Prison. Which, from the looks of things, sort of erases you from existence. No pressure.

While JR was led into the tunnels of an insidious maze filled with traps, competing against Oprah Winfrey, the leader of Cognito, Inc.'s number one competitor, The Illuminati, to be gifted the coveted robe and join the Shadow Board, Reagan's team was pitted against each other. Who was the mole?

As things came to a head, Rand fell from the ceiling, immediately pulling everyone's suspicions in his direction. However, Reagan chose family loyalty over that of her friends and did her best to clear her father's name while banding together with him to find the true identity of the mole. And after a worthy scuffle between Reagan, Rand, and an army of antiquated animatronic Cryptids against her coworkers, it was discovered that Bear-o, the hug-happy robotic teddy bear from her childhood, was the guilty party.

Bear-o's prime directive, which was initially programmed into his mainframe when Reagan was 8-years-old, was to ensure she was always happy. After watching her daily exhaustive workdays, and the ways in which her vindictive coworkers interacted with her, the robot bear decided she was miserable and put his programming to work. As Bear-o understood things, the whole team had to be murdered so Reagan could live out her best life by traveling to Mars where she would marry the members of the ‘90s boy band *NSYNC. It was a childhood dream of Reagan’s, which, unbeknownst to Bear-o, she had outgrown years ago.

To change Bear-o's programming, Reagan had to enter an access code to override his prime directive. But, unfortunately for her, that info was missing from her memory. Her father provided a worthwhile solution in "Inside Reagan," the final episode of the season, which was to use a group of memory helmets called, "Project JellyBean," to solve the problem and save the day.

Submerging themselves in Magic Myc's jelly tank for an Inception-like journey, they traversed the maze of giant conspiracy boards inside Reagan’s mind. As they burrowed deeper, a bespectacled young boy named Orrin started appearing in her memories. This was weird, considering Reagan didn’t have any friends. As soon as he'd appear, he'd glitch out and be gone.

She dug deeper, against Rand's wishes.

A specific memory found young Reagan with her parents, and Bear-o, in a meeting with her elementary school principal. While Reagan had the academic prowess to skip middle school entirely, he suggested she stay in 4th Grade because she had finally made a real-life friend: Orrin. Instead of applauding this accomplishment, though, Rand took action and erased any memory of Orrin from his daughter’s mind.

Why would he do such a thing? Aside from fearing Orrin would block Reagan's greatness with his simple mediocrity, past Rand revealed while he was removing the memory from her brain, that he'd positioned Reagan as an insurance plan, of sorts. In case he was ever ousted from Cognito, Inc., his daughter would continue his legacy in the company and his influence would persevere.

Needless to say, this was a huge shock to her system. He messed with her head and altered her childhood for his own gain. Reagan used this info to oust her father from her life and stop Bear-o in his tracks ("Orrin" was the access code). Once all the chaos had subsided, she returned to work the following day full of hope and purpose to correctly begin her new gig as CEO of, as she called it, “Cognito 2.0.”

However, due to the damage caused by the Bear-o attack, the Shadow Board had other ideas. Reagan was stripped of her title due to a clear lack of control over the chaos. And due to nefarious deeds committed against his robed corporate overlords, former CEO JR was sucked away to Shadow Prison. Who was going to be the top dog, now?

Rand Ridley, that's who. After pulling strings, and working his manipulative magic in the shadows, he had achieved the corporate takeover of his dreams. And after everything she accomplished, Reagan was right back at square one, stuck in her father’s shadow.

"Reagan's ambitious, and she's vying for the top spot,” Takeuchi says. “Naturally, other people in this world are also doing that. So I think that we'll probably see elements of how she coped with her situation at work and continues to try to elevate herself so that she can make a difference."

Inside Job, Part 1 is now streaming on Netflix.