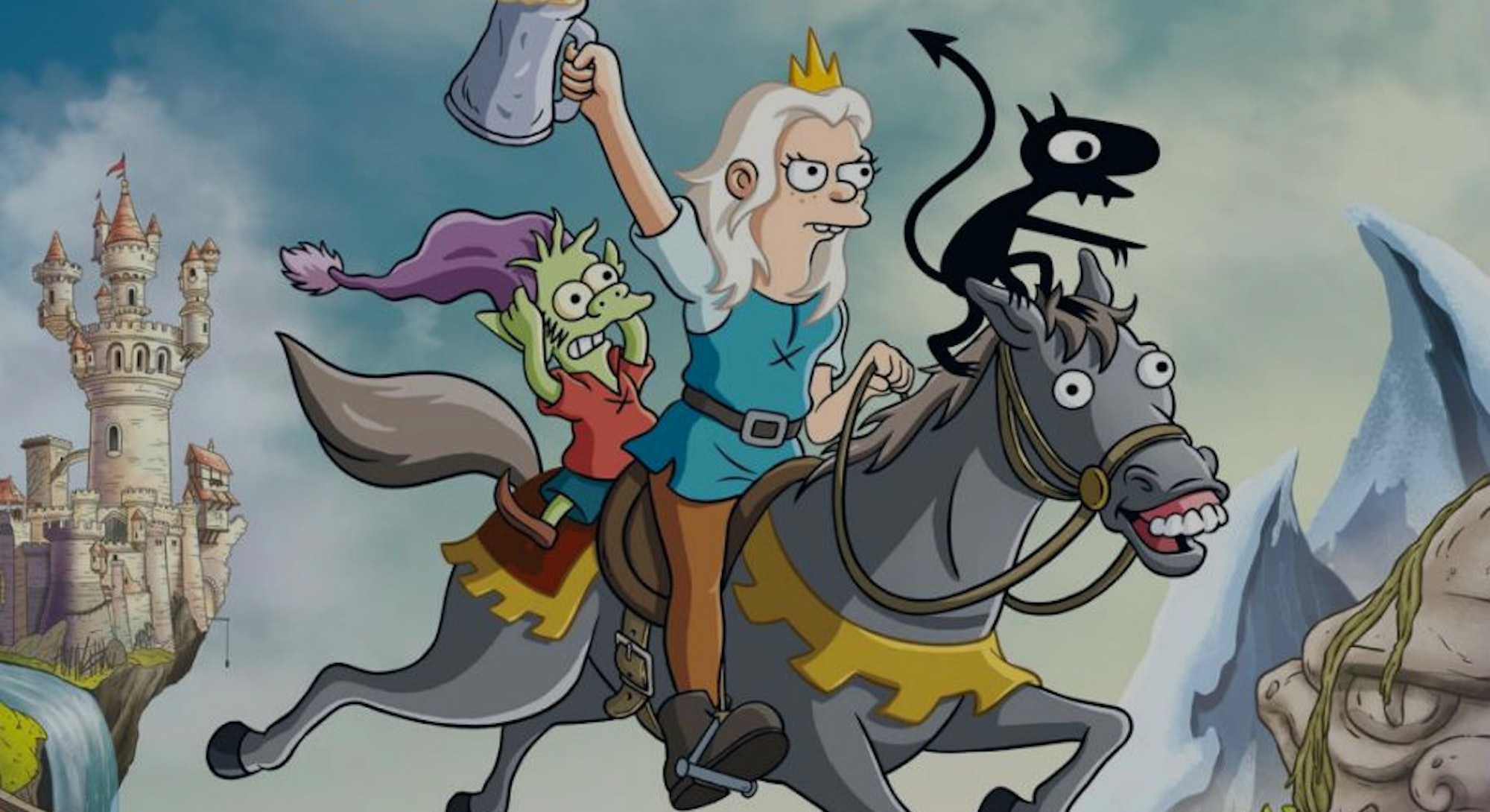 Matt Groening has always been ahead of his time. All it takes is a glance at his résumé — The Simpsons and Futurama, to name two of his works — to recognize that he has serious staying power and largely progressive views (The Problem with Apu aside). On both The Simpsons and Futurama, it’s the women who kick ass both mentally and physically, while all the male characters are either inept, lazy, or morally bankrupt.

To think that Groening created smart and feminist characters like Marge and Lisa Simpson back in the late 1980s — before third-wave feminism made fighting for equality cool — shows that Groening has always been a champion of strong women. Yet it’s taken him nearly three decades to create a show with a female main character, making Disenchantment — which debuted this week on Netflix — his most progressive series to date.

“I’ve been thinking about Bean and the character a long time,” Groening told Inverse this week at the red carpet premiere. “But yes, of course, everything is influenced by what’s happening right now.”

Netflix’s new adult animated comedy stars Broad City’s Abbi Jacobson as the voice of Princess Bean, heir to the crumbling medieval kingdom of Dreamland. But she’s not your average princess. Birds don’t help her get dressed in the morning, and she isn’t looking for her Prince Charming. She’d rather die than get married and be forced to give up her freedom to day drink, gamble, and live her life the way she wants. She’s strong-willed and smart enough to hustle Dreamland’s biggest poker players. She curses, sleeps around, steals drugs from her reptilian stepmother’s purse, and knows how to use a sword.

Bean is the animated princess we need in 2018.

That’s not to say that Bean is Groening’s first major feminist creation. Futurama’s Leela is the captain of the Planet Express and one of the few characters on the series who is competent enough not only to regularly get the job done but also to save her crews’ lives every time Fry, Bender, or any other male character messes up. The Simpsons’ matriarch Marge is the moral center of her family and has on many occasions proven to be the glue that holds them all together. Lisa’s high IQ and passionate political and ideological views make her an incredible role model for kids. But none of these women are the main characters of their series, making Bean a trailblazer in Groening’s repertoire.

“There have been [strong] female characters for a long time,” Groening said before acknowledging that “it’s just fun to try something different” by making his new Netflix show centered on a female main character.

Executive producer Patric Verrone, the only writer who worked on every episode of Futurama with Groening, says it’s “definitely” about time for a series like Disenchantment to debut. “[Women] are half the population, aren’t they?” he says. “It seemed like the time had come for an animated show about a woman. Guys have had their share of coverage, I think.”

Disenchantment executive producer Bill Oakley collaborated on both The Simpsons and Futurama for over 20 years and says he’s “delighted” to finally work on a series with a female main character.

“It’s probably long past overdue, isn’t it?” Oakley says. “When Matt came up with the character he wanted to have a female star who is in her adolescence — all the characters are, they’re going through troubled times in their lives together. That’s the fundamental core of the show. It’s different from the characters and characteristics that Matt has used in any other show.”

That change was what inspired Groening to create Bean in the first place: “The strongest characters in the other shows, Simpsons and Futurama, are the women — Lisa Simpson and Leela on Futurama — and now we decided to go all the way and make the woman the center of the show and see what we can do,” Groening says. “I [have] got to say, Abbi Jacobson who plays Princess Bean is fantastic. We try to make the show as pro-woman as we can and feminist and progressively thinking, but Abbi kicks it to another level.”

Groening credits Jacobson with helping to distinguish Bean’s voice and personality to make her stand out from Leela, Lisa, and Marge. “Not only is she a fantastic voice actor, she’s also a writer and a director herself,” he says. “When we’re in the studio recording, we write the funniest lines we can and she takes them and switches them around and makes them funnier, stuff that we could never have written as men.”

The creator also was inspired by “all the women” he knows to make Bean “undaunted,” just like his real-life sisters. “They’re full of all the characteristics of humans with their moods and flaws and all that stuff, but they don’t give up,” Groening says. Verrone admits that “we all projected things from loved ones and our own mothers and sisters and daughters onto Bean.”

But presenting Bean as an imperfect princess by “turning a Disney princess on her head,” according to Oakley, was the most important aspect of creating the character.

“The biggest priority was Bean being emotionally true and also original,” Groening adds. “We don’t want to just do something else that has been done already so she’s not a conventional princess that we are all familiar with from all the Disney movies that we grew up with. She’s more complicated. And because we have so many episodes to work with … we’re telling a very, very long story and Bean is going to learn a lot and change a lot.”

TV shows centered on flawed, complicated and relatable female main characters are certainly having their overdue moment thanks to the cultural shift brought on by #MeToo and Time’s Up, but Disenchantment was in production long before those movements gained traction in Hollywood.

“The show is not overtly political,” Groening says, “but it’s impossible not to be political completely and I think if you pay attention, there are certain telltale signs of a political point of view that I think might cheer some people up.”

The importance of getting to debut a character like Princess Bean in the current climate is absolutely not lost on Verrone. “I think it’s vital that there are more characters like Bean that are role models for women and men alike that are beyond the traditional Disney animated princess and prince,” he says.

So while Bean may not be the perfect role model — she messes literally up all the time — that’s totally okay. Because perfection is overrated, and Bean is more like the older sister or best friend you wish you had … especially if you had to grow up in the medieval times.

Disenchantment is streaming now on Netflix.