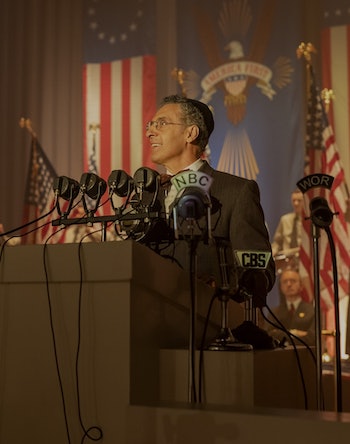 Nazis have never been hotter on TV than they are right now.

Thanks to the wannabe authoritarian in the White House and the white supremacist cronies filling out his cabinet, TV producers have been racing to bring symbolic depictions of Adolf Hitler and his Nazi army to the small screens. The symbolism practically writes itself.

On Amazon, Hunters offers the most obvious response to Donald Trump with its simple-but-effective revenge fantasy.

The creator of Hunters, David Weil, told Inverse in a recent interview that he sees Quentin Tarantino -- maker of Inglourious Basterds -- as “the master.” It’s no surprise Hunters takes a lot of what is great about Basterds and runs with it.

And on HBO, Westworld will get in on the fun in its third season with a new subplot devoted to a World War II-themed park full of robot Nazis.

But among this wave of fantasy stories about killing Nazis, only one, The Plot Against America, which debuts March 16 on HBO, accomplishes the most difficult and delicate aspect of telling a story about the Third Reich: the allure of Nazism.

Based on the 2004 novel by Phillip Roth, The Plot Against America explores an alternate history where President Franklin D. Roosevelt is challenged and defeated by Charles Lindbergh, the first man to fly solo across the Atlantic Ocean. In real-life, Lindbergh expressed anti-Semitic and pro-German beliefs.

In The Plot Against America, those beliefs are masked by an isolationist slogan: “A vote for Lindbergh is a vote against war.” Lindbergh’s victory keeps America out of WWII and allows fascism to infiltrate the country in increasingly disturbing ways.

Roth’s book is told from the perspective of a young boy named Phillip, the youngest son of a Jewish family in New Jersey that gets caught up in Lindbergh’s rise to power. The HBO adaptation, from The Wire creators David Simon and Ed Burns, follows several members of the family, and devotes plenty of time to Phillip's older brother Sandy, revealing how fascism corrupts the minds of children.

When the story begins, Sandy is a young teenager hiding photos under his bed and sneaking off to see the presidential candidate land his plane at a local airport, despite constantly hearing from his parents and their friends that Lindbergh is a Jew-hating fascist. He doesn’t understand why a man he once saw as a hero is now considered a villain, but he can’t help but get caught up in the excitement.

But as Plot Against America progresses, Sandy's Lindbergh obsession is at least partially driven by a teenage desire to rebel, even if he’s enthralled by the power this fictional president represents. Sandy is old enough to know Hitler is evil, but not mature enough to realize that his own father isn’t “worse than Hitler” for refusing to let Sandy visit the White House. For Sandy, fascism represents the chance to defy his parents, and that’s something any 15-year-old would likely leap at.

The Nazis in Plot Against America are charming, charismatic, and good-looking. It’s easy to see why a child, or even an adult, might find that alluring. In a time where fascism is more relevant than it’s been in decades, it’s a sharp reminder that the most sinister things can also be enormously appealing in the moment.

Amazon’s new show Hunters misses this point almost entirely. Set in 1970s New York, the series follows a group of Nazi-hunters facing off against a secret network of Hitler supporters in America. With Al Pacino playing the lead Nazi-hunter, the show is plenty of fun. It also provides a powerful, if not totally accurate, depiction of the horrors of the Holocaust through a series of flashbacks. But Hunters falls flat in its depiction of the Nazis themselves.

In this show’s alternate history, Nazis are one-dimensional villains, more alien than human. There’s nothing alluring about them, and though we’re told they’re constantly adding to their ranks, it’s tough to imagine anyone supporting them. One young Aryan henchman assigned to surveil an FBI detective pursues his goal with the single-minded determination of Javier Bardem in No Country for Old Men. Yes, he’s terrifying, but he’s not particularly magnetic. You’re never concerned that an entire movement is going to spring up around him, as it does with Roth’s Lindbergh.

Hunters might make for good entertainment, but over the course of its 10 hour-long episodes, it doesn’t have much to say about the nature of fascism or the terrifying appeal of Nazism. In just six episodes, The Plot Against America does all that and more, reminding us the worst type of evil rarely presents itself as such. The true villains are the ones smart enough to make us think, even for a minute, that they might actually be the good guys.