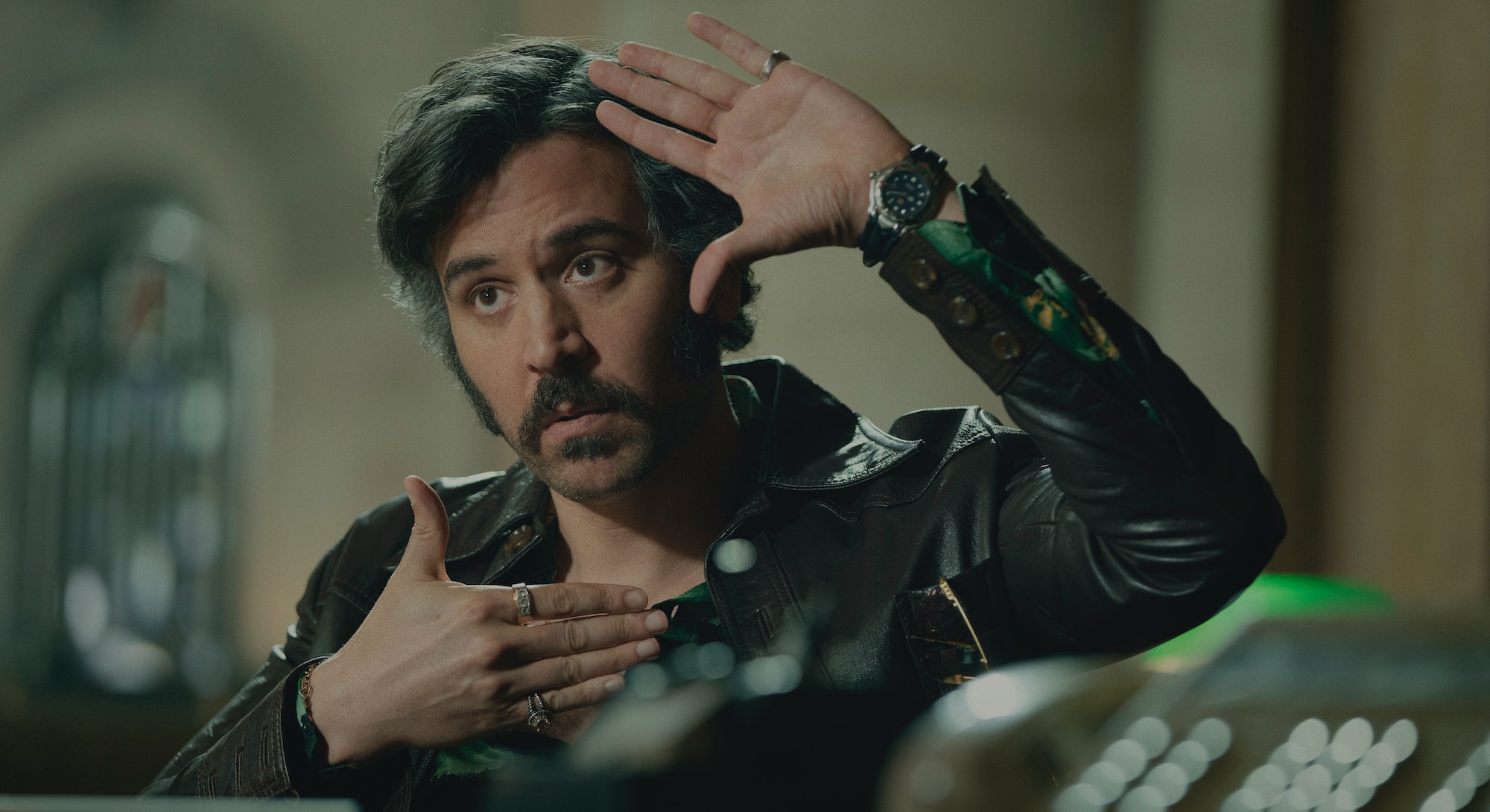 The plot of Hunters can be summed up in three words: Nazi killing spree.

Just 10 minutes into the pilot episode of Amazon's newest show, viewers are slammed over the head with an ultra-violent taste of what's to come. Here, audiences are introduced to Biff Simpson (Dylan Baker), a World War II Nazi hiding in plain sight as a U.S. politician with influence over President Carter. This scene, which begins as a serene BBQ complete with hot dogs and cold beer, ends when he's recognized by a colleague's wife as "The Butcher of Arlav" — the man who slaughtered her entire family just three decades prior.

What begins as a Norman Rockwell-esque look at 1970s America, ends in bloodshed as Biff murders everyone around him, including his own wife and kids. This in-your-face introduction tells us exactly what we're in for with Hunters. The grindhouse-style program from first-time show creator David Weil and executive producer Jordan Peele tells the tale of a small vigilante crew hell-bent on ridding the country of Nazis, who have been building a plan to construct a Fourth Reich — not in Germany, but right here in the U.S. of A.

Nazi-killing? Holocaust? Jewish vigilantes out for justice? Bring these components together and Hunters pretty much begs for the Quentin Tarantino comparisons. And the internet is already rife with them (including our own review). So is Weil tired of having his name mentioned in the same breath as the Once Upon a Time in Hollywood director? Yes and no.

"He's a master and I love his stuff," Weil tells Inverse. "I think the challenging thing is that I never set out to have this show be Quentin Tarantino or Tarantino light."

The Oscar-winner's career was built on cinematic riffs, with nods to everything from over-the-top B movies, to dialogue-heavy heist flicks, to brooding cowboy westerns, to gruesome martial arts flick. And when it comes to Holocaust vengeance, Tarantino took Nazi-killing to a whole other level a decade ago with his take-down of Adolf Hitler's Third Reich in Inglourious Basterds

Given Jonah's love for the paneled page and pop culture entertainment, Hunters is chock full of easter eggs that'll surely keep the modern-day viewer's attention. A quick debate with his friends over the badness of Darth Vader, and the ongoing references to Batman — another black-clad character who commits violence for a greater good — posits the notion that, while murder is most-definitely bad, killing Hitler's Nazis is totally good.

The heightened nature in which both Meyer's team and that of these would-be Fourth Reich members are presented, gives audiences a clear-cut idea of who the superheroes are, allowing us to cheer whenever a bad guy is brutally taken out. It's like Captain America battling the members of Hydra … except, Hunters is inspired by the Holocaust, a catastrophic historical event that impacted millions of people.

In order to make the vengeful killings in Hunters, Weil has hopes the audience will go along for the ride. and experience a sense of wish fulfillment and release in the process.

"I think it is so important for the show, which is about superheroes in some way, to give catharsis and give wish fulfillment," Weil says. "I think one of the things that does that is painting [the Nazis] larger-than-life so that when we do kill them all, we feel this sense of catharsis."

Meyer Offerman is compared to both Bruce Wayne and X-Men leader, Professor X. And depending on the episode and the light you may view him in, both observations would be correct. The wealthy old man has made it his life's mission to track down and kill Nazis in order to seek vengeance over the terrifying war crimes doled out by Hitler's Third Reich during the Holocaust. And with his rag-tag team by his side, new layers to this colorful grindhouse series present themselves.

Each vigilante comes with their own superpower, too. And Jonah's no different. His heightened ability to find hidden messages in what may look like coded gobbledygook to the naked eye inspires the young man to dub himself "The Codebreaker" in a scene that also breaks the fourth wall. It's one of many examples that reminds viewers that, even though this is a series that's regularly tackling traumatic subject matter, it's okay to still have some fun with it.

Hunters knows what it is and gives a sly wink to the audience on more than one occasion. It's a familiar choice, especially in a series that juggles tone and genre. And it brings us right back to Quentin Tarantino, who's made a habit of disrupting cinematic expectations.

"Is the show better or worse than a Tarantino picture?" Weil asks. "To me, this is such a misguided way to really approach the show and think about the show, because there are so many different and disparate tones within this show."

From the elements of satire, coming-of-age comedy, drive-in cinema-style action, and gory horror, Hunters throws everything at the proverbial wall. And much of what's thrown sticks. There are references to Son of Sam, Kojak, Tab cola, and a certain TV Guide magazine with Farrah Fawcett on the cover, to name a few.

Then there are the in-jokes for the Jewish crowd, including a Bar Mitzvah scene chock full of candle-lighting that introduces each member of Meyer's crew, character-driven propaganda posters, and a powerful Hava Nagila scene that doubles down on the program's Jewsploitation element — something we haven’t seen since Comedy Central's The Hebrew Hammer in 2003.

"The show is many things but I think it's a show that people have really never seen before," Weil says. "Sometimes, people don't know how to approach it right. One of the things that comes to mind, of course, is a Tarantino film. It has that same kind of blood slyness to it. He's a master and I love his stuff, but I really see this as Inglorious Basterds being on one end of the spectrum and Munich on the other. Our show kind of lives in the middle in this very Marathon Man space."

Hunters is now streaming on Amazon.