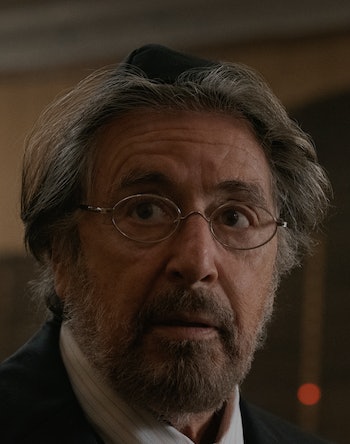 In Amazon's new series Hunters, Al Pacino leads an ensemble cast in a vengeful mission to kill Nazis secretly seeking to continue the atrocities of the Holocaust in 1970s America.

It's the type of show that feels like a no-brainer in this day and age, where literal Nazis rally in the streets and programs like Man in the High Castle and Penny Dreadful: City of Angels continue the legacy of portraying Adolf Hitler, and his Ubermensch acolytes, in a deservedly monstrous lens.

But as it turns out, the timing of current events almost killed this new series from first-time show-creator David Weil, who’s since signed an overall development deal with Amazon. And Weil tells Inverse there was one event in particular that nearly stopped Hunters from ever airing.

"Trump was just elected and I remember one of the people who had read it said — and this was like a big production company — 'Don't you think you're going to alienate half of America?'" Weil says.

"Like, 'You can't do this, you're gonna alienate half the population.'"

This all happened before Weil partnered with Jordan Peele's company Monkeypaw Productions and sold Hunters to Amazon. Weil wouldn't reveal which company presumably passed on the series for this reason.

“There was a fear that hunting Nazis was somehow controversial.”

The results of the presidential election prompted multiple television networks to rethink their programming strategy to reach the allegedly overlooked audience that voted Trump into office. It was a time that brought Rosanne back to television 21 years after the show's initial run — only to be canceled one season in, due to a racist tweet by star and show-creator Rosanne Barr; and then there's Tim Allen's sitcom Last Man Standing, which was also canceled on ABC in 2017 before Fox stepped in and rescued it the following year.

So was this the portion of the country's population that would be alienated? And if so, was the suggestion that those unfamiliar with Jewish culture or somehow the concept Nazis itself, be the ones left out in the proverbial cold? Weil is still baffled at the notion.

"There was a fear that hunting Nazis was somehow controversial, you know?" he says. "Yeah, that was the kind of mantra. And it was so mystifying to me. And it was just so strange."

At its core, Hunters is a story about a Jewish boy's loving connection to his grandmother (and the secrets he begins to uncover about her harrowing World War II experience at the notorious Holocaust concentration camp, Auschwitz). But there's an authenticity in the look and feel of the show with regards to its Jewish representation.

You can see it in the concentration camp uniforms and the Jewish accouterment that adorns Meyer's home. It's there in Jonah's (Logan Lerman) emotional struggle to accept his grandmother's passing, which is brought to life through the stark realization that her homemade chicken soup was, much like his Safta, truly irreplaceable. In Episode 6, one character even jokes that he has to “drop some chocolate dreidels into the Dead Sea” before making a beeline for the bathroom.

Hunters also gets the little details right in its depiction of the Jewish mourning ritual, known as sitting Shiva. Being the grandson, Jonah is confronted in Episode 1 about the rules of this practice that dictate only immediate family members are allowed to partake in the seven-day tribute, grandchildren not included. (In response, he hurls a gefiltefish-related insult at the well-meaning mourner and runs out of the house.)

“We always knew that we were drawing a parallel to today.”

These are just a few examples that may speak to the fear that viewers unfamiliar with the religion or culture might be compelled to change the channel. But producer Nikki Toscana, who partnered with Weil to bring his vision to life, is quick to wave off the idea.

"I'm Italian, but there were so many stories that David and I were sharing that are so similar," she tells Inverse. “It was about letting our audience behind the velvet rope that was upending a stereotype we might have about our Jewish neighbor, and I think that that's what it is ultimately. It's just about making it cool, whether that’s to be Jewish, to be black, to be a Japanese American, to be gay; and giving them these superhero capes. Which is something that we don't see very often now."

As disconnected to America in 2020 as the show may feel thanks to its stylized take on 1970s New York, Hunters’ Nazi-hunting element still has a harsh relevance to our society today.

"We always knew that we were drawing a parallel to today," Toscana says. "We didn't have our heads in the sand and we certainly weren't, on any level, stepping away from it. I think that the whole idea, that antisemitism and racism are more present today than they have been in previous years. It's a global epidemic that's extending beyond political party, and it was our desire to hold up a mirror to the world in 1977 and the world we live in today, which, you know, at times, doesn't feel that much different."