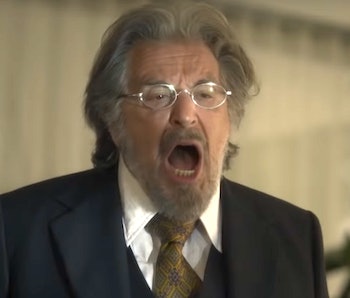 The supremely stylish alt-history series Hunters has been renewed for a second season.

The series landed on Amazon Prime Video in late February 2020, promising to take viewers on a wild, pulpy trip back to 1977 and introduce us to a group of vigilantes looking to serve up brutal justice to Nazis hiding out in America. Created by David Weil and pulling details from the very real government initiative Operation Paperclip, Hunters features an all-star cast led by Al Pacino as a Holocaust survivor heading up the group of titular hunters and Logan Lerman as a Brooklyn teen who is drawn into the hunt after the death of his grandmother.

Here's what we know so far about Hunters Season 2, including what direction the story will go in and which cast members will be back.

When will Hunters Season 2 arrive on Prime Video?

Hunters has been renewed for Season 2, Amazon confirmed on August 4, 2020:

In October 2021, showrunner David Weil told Entertainment Weekly that filming for Season 2 was well underway. He said, "I hope that we'll be speaking at some point next year [in 2022] about the release of Hunters season 2."

How many episodes will be in Hunters Season 2?

Hunters Season 2 will most likely consist of 10 episodes, each running around an hour long. This was the case with Season 1. Except for the first episode, which boasts a runtime of 90 minutes, each episode was an hour more or less.

Is there a trailer for Hunters Season 2?

There is no trailer for Hunters Season 2 yet. We won't start seeing any media, including behind-the-scenes photos, posters, or trailers, for a few weeks, based on previous marketing strategies by Amazon.

What happened at the end of Hunters Season 1?

Spoilers ahead for Hunters Season 1.

The final moments of Hunters Season 1 were some of the most suspenseful, surprise-filled, and action-packed in recent memory. Numerous stopping points were put in place while teasing what could come if Season 2 were to happen.

First up: Jonah kills Meyer Offerman after realizing he is actually Wilhelm Zuchs, a.k.a. The Wolf, the Nazi doctor responsible for torturing his grandmother, Ruth, and the real Meyer Offerman. Jonah puts the pieces together in real-time after delivering the man he thought was The Wolf to the fake Meyer and watching Meyer murder him. It is then revealed that The Wolf found Meyer in one of the survivor camps at the end of World War II, killed him, and then took on his identity to escape Europe without facing punishment for his crimes. For the next 30 years, The Wolf transformed into Meyer completely and, in doing so, apparently came to understand why his hatred for the Jews during his time as a Nazi was wrong and began the hunt with Ruth as penance for his actions. Jonah, not believing The Wolf's story, kills him.

Meanwhile, Joe is struck in a hit-and-run, bundled into a car, and ends up at a very lavish mansion in Argentina. There, it is revealed The Colonel survived the car wreck meant to kill her and fled the country where she is ostensibly still trying to find a way to create the Fourth Reich. The Colonel seems pleased to have Joe in her midst while he looks totally confused. Things go from sinister to bonkers when we see The Colonel invite Joe to dine with her and four identical blond-haired, blue-eyed boys dressed like the next wave of the Hitler Youth. As they sit down, an elderly man comes out from the mansion to the table. The Colonel addresses him as "Adolf," and he addresses The Colonel as "Eva," ultimately revealing that she is Eva Braun and he is Adolf Hitler. In real life, Hitler and Braun died by suicide in a bunker around the time the Allies secured Germany, so Hunters is really playing with history here.

The Wolf's murder and Joe's disappearance set in motion the decision for remaining hunters — Roxy, Lonny, and Sister Harriet — to go to Europe to suss out the Nazis they know to be in hiding. Millie is approached to lead a task force to hunt Nazis in a more official, law-abiding fashion — an opportunity she seems ready to take. In a brief scene, Sister Harriet conducts a secret conversation with an unknown character, who appears to have a particular interest in Jonah. As for the remaining Nazis we saw in Season 1, Travis opts to stay in prison and spread his racist, white supremacist beliefs to his fellow inmates. At the same time, Biff assumes a false identity and flees to the Soviet Union.

What's the plot of Hunters Season 2?

Based on the stopping points in the Season 1 finale, we can expect the main focus of Season 2 to center on both the two Nazi-hunting operations taken on by Jonah and the hunters, as well as Millie and her task force, respectively. These two groups will likely continue to clash as their legal and illegal methodologies for sussing out the bad guys overlap. As far as Jonah and the hunters are concerned, we'll also need some answers on who Sister Harriet was speaking to on the phone and why this mysterious person is so interested in meeting Jonah. What is Hunters not telling us about Jonah or his personal history that is so important?

You also can't expect Hunters not to address the existence of Adolf Hitler. The show officially going into alternate history territory with Eva and Adolf living in Argentina and still working towards a Fourth Reich will make big waves when the hunters get word of their survival. Weil told Entertainment Weekly he wanted to deliver on the promise he set up at the end of Season 1, confirming the Hitler focus in saying, "I think the introduction of perhaps the most villainous character in history deserves a fitting season that pursues that character."

Who's in the Hunters Season 2 cast?

One big name being cast for Season 2 is Jennifer Jason Leigh. The Oscar nominee is playing Chava, a top-ranked Nazi hunter. The other two confirmed returning cast members teased in her announcement were Logan Lerman and Jerrika Hinton.

Lerman's Jonah Heidelbaum will likely be in a more prominent leading role after being positioned as the character meant to lead the hunt for Nazis in hiding. Joining Lerman could be Kate Mulvaney as Sister Harriet, Josh Radnor as Lonny Flash, and Tiffany Boone as Roxy Jones. Hinton returns as Millie Morris, now moving from FBI agent to leader of a government-sponsored Nazi-hunting task force. Dylan Baker will likely return as Biff Simpson, the Nazi-turned-presidential cabinet member-turned-faux Russian hiding out in the Soviet Union. Lena Olin will hopefully be back as The Colonel, a.k.a. Eva Braun, and Louis Ozawa will return to play Joe Mizushima, an imprisoned guest of The Colonel's in Argentina. And we can't forget about Travis Leich, played by Greg Austin, who we'll see more of in Season 2 as he works on turning his fellow inmates into white supremacists.

Al Pacino was one of the biggest draws for Hunters in Season 1. Who wouldn't want to watch Pacino yell about killing Nazis hiding out in America for 10 glorious episodes? But thanks to the genuinely shocking reveal that Meyer Offerman was actually The Wolf and Jonah subsequently killing him, it's very likely Pacino won't be back for Season 2.

However, if Hunters continues to play around with style and genre, there could be a way to bring Meyer/The Wolf back. In interviews proper, Weil has continued to neither confirm nor deny his comeback. One of the best bets for a possible Pacino return is to see him appear in flashbacks, a common occurrence throughout Season 1. We should probably keep our expectations low, though, because securing a major A-lister like Pacino is a big ask.

How can I watch Hunters Season 2?

You'll be able to watch on Amazon Prime Video, of course. However, given how the streaming service has done releases as of late, it remains to be seen if the entirety of Season 2 will premiere at once, weekly, or in a hybrid of the two.

This article was originally published on Feb. 24, 2020