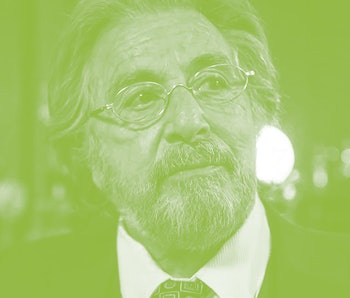 Just when you thought you were out, Amazon pulls you back in. The latest Prime original, Hunters, is sure to keep you from switching over to another app like Disney+ or Netflix with its story of Al Pacino and his gang of Nazi hunters in 1970s New York. But what time exactly does Hunters release on Amazon? Here's what you need to know.

Unlike Netflix, which sticks to a strict midnight Pacific release time for new shows and movies, Amazon likes to play things a little looser. The only identifiable pattern is that the company typically launches new shows at 12 a.m. Greenwich Mean Time on the date of release, which translates to 7 p.m. Eastern the day before if you're in the Eastern time zone. In other words, if you like in New York where Hunters takes place, you can check out the first few episodes the night before it "officially" comes out. (However, in some cases you'll still have to wait until midnight local time before the show or movie unlocks, so don't plan your night around it.)

Even if you have the night off, don't expect to make it very far into your release night Hunters binge. The first episode is basically a movie of its own with a hefty 90-minute runtime. After that, each episode comes in at about one hour, and with 10 episodes total, it would take you all night to finish the series.

Hunters is also pretty brutal, both in its depiction of the events of the Holocaust (told in a series of flashbacks throughout the show) and in the ways Pacino and his friends exact their revenge on the Nazis who managed to escape justice and hide out in America. After an episode or two, you'll probably need a break.

That said, Hunters is a very good show. The "history" may be far from accurate, but the acting and writing are all top-notch. There's also a visual style liberally borrowed from Quentin Tarantino that gives the Amazon show the occasional jolt of energy whenever it needs it most.

Even if you could binge through Hunters in a single night, this is a show best enjoyed over the course of weeks (not hours). Even so, the fact that Amazon makes it easy to watch an episode or two the night it comes out is a huge plus — especially compared to Disney+, where your only option was to stay up until 3 a.m. Eastern just to avoid Baby Yoda spoilers.