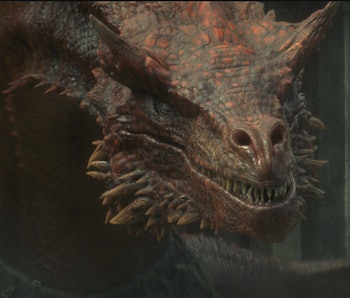 There are many differences between the Song of Ice and Fire books and the Game of Thrones series, but one of the biggest is chronology. During GoT’s run, new fans knew exactly where to start: Season 1, Episode 1. But even then, George R.R. Martin’s book series featured so many prequels and spinoffs that pinning down a firm reading order was difficult.

The theory — Redditor u/CruzAderjc suggests the first shot of House of the Dragon, which shows Rhaenyra swooping around on her dragon, isn’t just meant as a bombastic way to start the series, but is actually a spiritual continuation of the Season 6 finale of Game of Thrones, which showed Daenerys Targaryen and her forces setting sail across the Narrow Sea to conquer Westeros. (Yes, the two shows are set centuries apart. Think metaphorically.)

When you look back at the Season 6 finale of Game of Thrones, there are notable similarities. The first shots of House of the Dragon show Rhaenyra returning home to King’s Landing after a dragon flight, while the last shots of Season 6 show Daenerys returning home in a much grander sense.

The theory suggests that House of the Dragon’s creators are subtly suggesting you should ignore the final two seasons of Game of Thrones. (Think of it a bit like the way Disney rendered large swaths of Star Wars history as non-canon Legends after purchasing Lucasfilm and relaunching that franchise.)

This may sound absurd, but it might not be that farfetched. Fans generally argue that the quality of Game of Thrones took a sharp downturn in Seasons 7 and 8, and this idea invites you to purge those final episodes from your mind and invent your own ending to the saga of Daenerys and her contemporaries. (At least until George R.R. Martin finally finishes the books.)

This visual symmetry also suggests a new way for future generations of fans to watch the two shows. To bring up Star Wars again, it’s like the Thrones version of the Machete Order, a non-linear way of watching the story to include a “built-in” flashback. You can watch the first six seasons of Game of Thrones, then pause for a flashback by watching House of the Dragon, much like how the Machete Order calls for inserting the last two movies of the prequel trilogy right after Empire Strikes Back. Then you can decide whether you want to soldier on with Thrones’ dubious final seasons.

This makes narrative sense too. Just as the Machete Order allows Star Wars fans to reflect on Anakin Skywalker’s life immediately after we discover that he’s Darth Vader, this Game of Thrones order would flash back to the history of the Targaryens right after viewers see two major plot points related to them: Daenerys beginning her attempt to conquer Westeros, and the big reveal that Jon Snow was the son of Lyanna Stark and Rhaegar Targaryen.

The Inverse analysis — The last two seasons of Game of Thrones aren’t going anywhere no matter what you think of them, but this theory could establish a new viewing order that would at least give them some better context... or give you an excuse to skip Thrones’ ending and go read some fanfic instead.

House of the Dragon is now streaming on HBO Max.