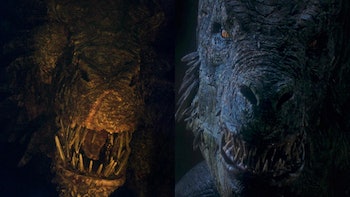 In House of the Dragon, the reptiles are as important as the humans. Queen Rhaenyra Targaryen (Emma D’Arcy) and King Aegon II Targaryen (Tom Glynn-Carney) can duke it out all they want, but they’ll never be as rapacious and feral as their dragons. The beasts are technically tamed, but domesticity has its limits. As we saw in Episode 10, these flying monsters can do whatever they want. That’s the advantage of being at the top of the food chain.

But what happens when the apex of these apex predators face off? While Aemond’s massive Vhagar and the current unclaimed Vermithor never actually fight in George R.R. Martin’s prequel texts, HBO could change course and give fans an aerial clash for the ages. In fact, Reddit users have been debating this exact scenario.

The answer to this hypothetical conundrum is clearer than you’d think. The source material reveals how much battle experience both dragons had, their sizes, and how they eventually met their end, all valuable data points to help us shape our own theory.

Potential spoilers ahead for House of the Dragon!

Vhagar was the largest dragon to participate in the Dance of the Dragons. Named for one of the gods of Old Valyria, she had a series of riders before being claimed by Prince Aemond “One-Eye” Targaryen. At the end of Season 1, we saw her chomp through Arrax and Prince Lucerys at Storm’s End.

Vhagar is used to winning wars, including Aegon’s Conquest, the First Dornish War, the Faith Militant Uprising, and the Fourth Dornish War.

Aemond and Vhagar wreak havoc throughout the Seven Kingdoms, but Daemon and his dragon, Caraxes, stop their rampage. Daemon jumps from Caraxes to Vhagar to put his sword through Aemond’s remaining eye, while the dragons crash into each other and fall into the lake. Only Vhagar and Aemond’s remains were recovered, while rumors about the fate of Daemon and Caraxes abounded.

Vermithor is the second-largest “tamable” dragon in Westeros. Once ridden by King Jaehaerys I Targaryen, the grandfather of Viserys I Targaryen, we recently saw him serenaded by Daemon, who was presumably trying to re-tame the dragon and add it to the Blacks’ arsenal. Vermithor is eventually persuaded, but only after a new dragonrider named Hugh Hammer comes around.

Like Vhagar, Vermithor is a major participant in the Dance of the Dragons. Providing details about Vermithor’s death would step into spoiler territory, but we will say that Vermithor falls in a three-way tussle with Seasmoke (formerly Laenor Velaryon’s dragon) and Tessarion (the yet-to-be-seen Daeron Targaryen’s dragon). Vermithor rips Seasmoke’s head off but then collapses from its injuries.

The Inverse Analysis — If Vhagar and Vermithor were pitted against each other above the skies of Westeros, our educated guess is that Vhagar would triumph over Vermithor. Her sheer size, nonchalance with dragon cannibalism (see Lucerys Velaryon and Arrax’s death in Episode 10), wild and unhinged ferocity (see, again, Episode 10), and her extensive experience would likely make her a victor against Vermithor. But we aren’t saying the fight would be easy; considering the latter’s own size, Vhagar would work up a sweat going claw-to-claw with Vermithor.

The likelihood of this battle ever happening on-screen is slim, but HBO could always take creative liberties to give fans what they really want: More epic dragon brawls.

House of the Dragon Season 1 is available to stream on HBO Max.