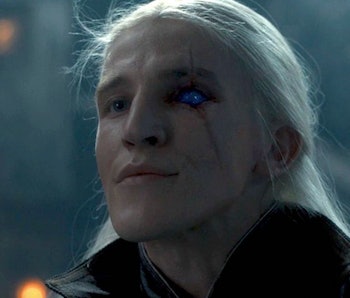 Rhaenyra Targaryen’s supporters are no angels, but so far they seem to be our closest thing to heroes on House of the Dragon.

The Blacks — which include Rhaenyra (Emma D’Arcy), her husband Daemon (Matt Smith), their children, the Velaryons, and former Kingsguard knights and small council members from Viserys I’s reign — have a more legitimate claim to the Iron Throne. HBO makes it hard not to champion Rhaenyra.

Major spoilers for House of the Dragon Season 1 ahead!

But even after committing treason in Episode 9, and murder in Episode 10, we’re meant to feel for the Greens. Alicent (Olivia Cooke) wants to repair a girlhood friendship, while her son Aemond is shocked that he couldn’t fully domesticate the largest dragon in Westeros.

Is HBO diverging too far from the source material to twist these canonical villains into tragic, sympathetic antiheroes?

Alicent Hightower and Rhaenyra Targaryen are not only portrayed as former friends who have just one teensy problem keeping them from being thick as thieves again — one of them marries the other’s dad and bears his first and second-born sons — but even as each other’s teenage crushes.

HBO queerbaits its audience at the onset of House of the Dragon by implying a “puppy love” romance between Alicent and Rhaenyra, which never existed in the source material. In the books, Alicent is significantly older than Rhaenyra, and they never form a close bond. Despite the televised romantic tease, Alicent is pimped out to feeble Viserys I Targaryen (Paddy Considine), and Rhaenyra is forced into marriage with her gay cousin, Laenor Velaryon (John MacMillan). Later, their dynamic devolves into a bizarre stepdaughter and stepmother relationship soured by the pressures of heirdom.

Before Alicent and Rhaenyra began to plot treacherous acts against each other, we were led to care about their relationship and respective plights. It’s not easy to be a queen or princess in Westeros, and so we see Alicent as a far more sympathetic character than the one we meet in the books.

In the source material, Alicent is callous, arrogant, and holier-than-thou. She’s a deeply unlikeable character who never strays far from the evil stepmother stereotype. Her motives are clear: She wants to be Queen Consort and bring prestige and power to House Hightower and the Faith of the Seven, and she will accomplish this goal by any means necessary.

When Aegon II becomes king, she doesn’t rush to send an envoy to Rhaenyra, nor does her father, Otto Hightower (Rhys Ifans), draft and deliver peace terms. It’s Grand Maester Orwyle (Kurt Egyiawan) who proposes the idea, which Alicent reluctantly supports only after her daughter and the king’s sister-wife, Helaena (Phia Saban), enthusiastically agrees with Orwyle’s plan.

And Alicent certainly does not save a page from Rhaenyra’s homework as a memoir of their happy, carefree days reading underneath Weirwood trees together. Showing viewers that Alicent remembers this period is a cheap way to garner sympathy for the Greens, a side committing treason and going against the late king’s wishes for succession. By toying with our hearts, we can’t help but think of Alicent and Rhaenyra as the two teens crushing on each other in the Red Keep, rather than two women who can and will be ruthless in their pursuit of a dynastic legacy.

Speaking of ruthless, HBO’s decision to make Aemond’s manslaughter (and dragonslaughter) of Lucerys Velaryon and Arrax an unfortunate oopsy-daisy, rather than the source material’s harrowing, pivotal moment that speaks to the lengths the Greens were willing to go, was a deeply discomfiting decision, weakening the why behind Lucerys’ demise and softening the blow of its aftermath.

In the books, Aemond is determined to kill Lucerys when he runs into him at Storm’s End. He sees his nephew as a spoiled, bastard brat who doesn’t deserve the perks that come with having a queen for a mother. Plus, Lucerys took his eye and scarred his face, which Aemond never forgave him for. While homicide wasn’t his initial plan when he set off to visit Borros Baratheon, Aemond has no problem seizing the opportunity.

Even the way Daemon broke the news of Lucerys’ demise to Rhaenyra at the very end of Episode 10 was subdued. Instead of showing House of the Dragon’s audience the grotesque corpses of Arrax and Lucerys washing up together on the shore as they do in the book, we don’t see the aftermath of Aemond and Vhagar’s murder romp over Shipbreaker Bay.

That visual, though graphic, was necessary so viewers could feel more sorrow over Lucerys’ unjust and untimely passing, and more anger over Aemond’s dangerous bullying. Without this upsetting scene, Lucerys’ and Arrax’s death feel too removed from the Greens’ treachery. By Episode 10’s conclusion, we’re meant to be in utter disbelief — how could they do that? — when in the source material, we already know just how far the Hightower-Targaryens are willing to go to secure the Iron Throne.

The Inverse Analysis — Will HBO Max continue to make The Greens too sympathetic, or will both the Blacks and the Greens get some much-needed nuance injected into their intertwined storylines?

Part of what made Game of Thrones such an intoxicating viewing experience was its ability to make us switch allegiances every other episode, and feel differently about its many characters from season to season. And while we appreciate the complex, morally gray zone that the Blacks and the Greens are being lumped in, perhaps it would be prudent to keep some acts objectively evil and some objectively good, lest we forget that there’s even a point to rooting for one side over the other.

House of the Dragon Season 1 is available to stream now on HBO Max.